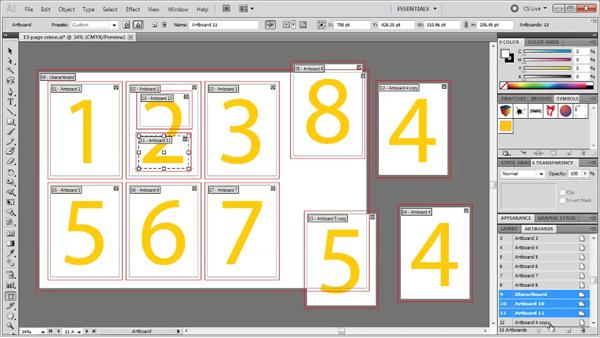 In this exercise I'm going to introduce you to the Artboards panel and this is one of my favorite new features inside of Illustrator CS5. I saved my progress as 13-page crime.AI. Things are just getting worse and worse here inside the 01makedoc folder and we do indeed have 13 artboards at this point. However, what I want to have is just 10. So I want to get rid of the big uber artboard as well as the two diminutive artboards inside of artboard number two. That will leave us with 10 artboards that we can then rearrange and make tidy here inside the illustration window.

And I'm still inside of the Artboard Edit mode by virtue the fact that the Artboard tool is active and you would think you'd be able to select multiple artboards inside of Illustrator but if you try to Shift-click on another artboard, you'll either get nothing or if you drag just ever so slightly while you have Shift down you'll create a very tiny new artboard. Because after all, the Shift key is designed to allow you to create one artboard inside of another. So Shift-clicking does not select multiple things in this mode. I'll go ahead and press Ctrl+Z or Command+Z Mac to undo that new artboard.

The last thing we need is more artboards here. Instead what you do is switch to the Artboards panel. Check it out. Go to the Window menu and choose Artboards and that brings up the Artboards panel down here in the lower right region of the screen by default. And you'll see an item for every artboard inside of your illustration. So if you scroll down, in my case artboard nine, which is that uber artboard, is active. And let's say I want to stary with artboard 11, which is called artboard 10 copy right now. Let's change its name so that we can track it a little better up here in the Control panel I'll change the name to artboard 11. Like so.

If you want to select multiple artboards that are nonadjacent, so in other words, not right next to each other, press the Ctrl key or the Command key on a Mac and click on another artboard and that will select nonadjacent artboards as I say. If you Ctrl-click or Command-click again on that artboard it'll go ahead and deselect it. Illustrator has apparently also read that as a double click so it went ahead and and zoomed me in on artboard 11. That's very nice. I'll go to the View menu, and I'll choose Fit All in Window. Ctrl+Alt+0, Command+Option +O on a Mac to back out.

If you want select a range of adjacent artboards you press the Shift key and click. So for example artboard 11 was selected and I Shift-click on uber artboard then I select artboard 10 as well. Now to get rid of those guys, because notice that not all three of them are selected out here in the illustration window, just artboard 11 is, and so if I were to press the Backspace key or the Delete key on a Mac I'd just get rid of artboard 11. So what you want to do lis you want to drop down here to the little trashcan icon here in the Artboard panel, down here in the lower right corner. Click on it.

That's all you do and those selected artboards go away. All right, now we have just 10 artboards left, but they're numbered incorrectly. I'm looking at the first numbers, not the names. 1, 2, 3, then 8, then 9 and 10. Then we go 5, 6, 7, 10, 4. So that's totally wrong obviously. I've got artboard 8 selected. I'm going to change its name to 4. Like so. But that doesn't change its number. It's still 08. So we'll fix that in just a moment but I'm going to fix all the names first just to make this a little easier to track.

I'll click of what's currently called Artboard 4 copy, change it to 5. Press the Enter key or Return key on a Mac, click on the one that's called Artboard 5 copy, which is currently 10 but it ought to be 9. So I'll just change its name to 9 and then Artboard 4 right here ought to be 10. All right and what that'll do is it'll just help us order things properly here inside the Artboards pane. Because if you change the order of these artboards here, then you changed their page numbering as well, which is something you weren't able to do in CS4.

You can now do in CS5, which is awesome. So Artboard 10, this guy right there which is now 4, should be 10. So I'll go ahead and drag it down to the bottom of the list and you're looking for that thick horizontal bar. I want it all away at the end of the list. Now it is artboard 10. That's awesome. So we've got 04, that's wrong, 5, 6, fine, but then we have 9, 10. That's correct. So now let's say we want to fix the others. As opposed to try and track where they are physically here inside the illustration window, let's just look at them inside of artboards list.

Now that might look like a fair amount of work. After all, I did have to be fairly meticulous and pay attention to what I was doing there. However, I have to stress this. This is something you couldn't even do in CS4. You didn't have this kind of control. You do now and things make a heck of a lot more sense thanks to the addition of this artboards panel here inside Illustrator CS5.