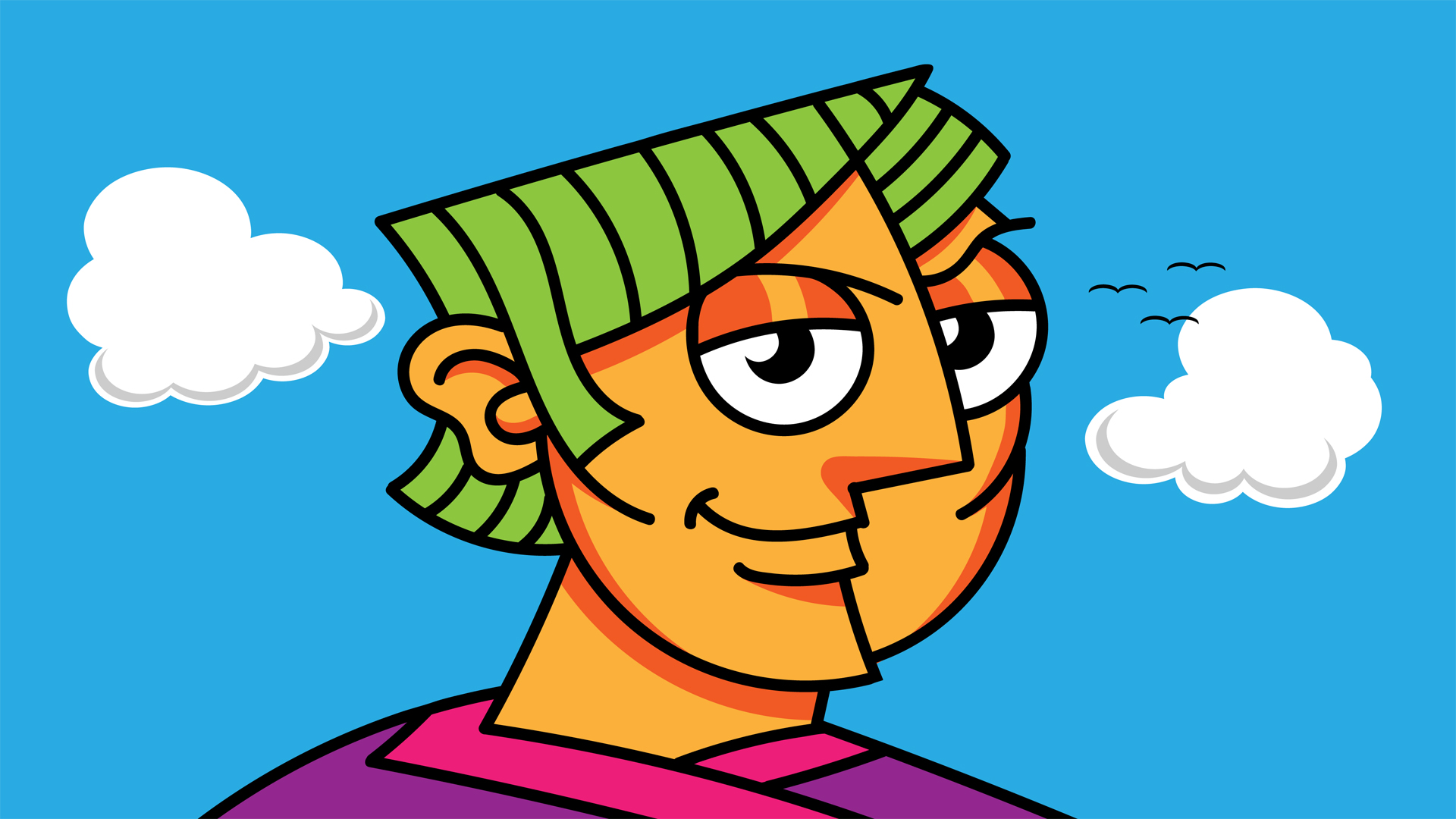 - [Voiceover] Now if there's a downside to the techniques I was demonstrating in the previous movie, it's that you're forever zooming with respect to the center of your document or artboard. So, for example, if I press control plus or command plus on a Mac to zoom in on this welcome screen, after a point, I end up entirely missing Michelangelo's David, which means that if I want to be able to see him on screen, I need to manually scroll to that portion of the document, which can be a real pain in the neck over time. Alright, so I'll go and fit this artboard on screen by pressing control, zero or command, zero on the Mac.

Notice, in my case, the first central artboard is once again active. And now I'll switch to the zoom tool, located down here at the bottom of the toolbox. And the advantage of this tool is that it allows you to zoom in on a specific detail just by clicking on it. So for example, I'll go ahead and click on this area between David's eyes in order to zoom in on his face. You can even totally shift your zoom to a different detail. For example, if I click on this leaf ornament right here, I'll go ahead and center it on screen, I can click on the second o in the words on-on-one in order to zoom this text and so forth.

Now notice that my magnifying glass cursor currently shows a plus sign, which indicates that it's set to zoom in. If you want to zoom out, press and hold the alt key or the option key on the Mac. At which point, the plus will change to a minus, and then click on an element in order to center it as you zoom outward. And now notice that I have the option of zooming in on this other detail inside of my illustration by releasing the alter option key so I return to my magnifying glass cursor with a plus sign in it, and then I'll just click on this detail right here to zoom in on it.

Now once again, this is one of those functions that you use so often inside Illustrator that it's worth memorizing a keyboard shortcut. And here's how that works. The first thing I'm going to do is switch back to the black arrow tool up here at the top of the toolbox. And now I'll just press control, zero or command, zero on the mac to once again fit the active artboard on screen. And now I'll press a keyboard shortcut for the zoom tool, which is control, spacebar here on the PC. That's command, spacebar on a Mac.

And incidentally, those of you working on a Mac, if you run into problems, sit tight. In just a moment, I'll show you the solution. And now, having pressed control, spacebar or command, spacebar on a Mac, I'll just go ahead and click on David's face in order to zoom in. If you want to zoom out, then you add the alt key here in the PC or the option key on the Mac. So in other words, you control, alt, spacebar, click to zoom out. That's command, option, spacebar, click on the Mac to zoom out from your Illustration. And then, to return to the active tool, you just release your keys and notice that once again, I'm seeing my black arrow cursor on screen.

Now if you're having problems on a Macintosh, then the most likely culprit is Spotlight. Notice that, by default, if I press command, spacebar, I get the Spotlight search. Now one way around that is to press the spacebar first and then press the command key, and that way, you can, then, click to zoom in. But that's kind of a pain in the neck. And then if you press command, option, spacebar, you're gonna bring up the search window. So here's the solution. What I recommend you do because command, spacebar and command, option, spacebar are such useful tricks here inside Illustrator and throughout InDesign and Photoshop as well, I suggest you change the OS level keyboard shortcut by going up to the Apple menu and choosing system preferences.

And then go ahead and click on the keyboard icon, which you may find at a different location in the list, and next, you want to click on the shortcut tabs right there. Then locate Spotlight and notice our offending keyboard shortcut. To show the Spotlight search it's command, spacebar. To show our Finder search window, it's command, option, spacebar. Let's change both of these by first clicking on this item and then clicking on this keyboard shortcut right there. Make sure it's highlighted and press control, spacebar.

That's the whole control key with a spacebar. And that'll show you your new keyboard shortcut, which looks like a caret followed by space. And then go ahead and click on the next item. Click its keyboard shortcut again to make sure it's highlight, and press control, options, spacebar. And you'll end up with this little cryptic thing here. Caret followed by this thing here, which stands for the option key, followed by spacebar. And that should take care of it. Now if you just go ahead and close your keyboard preferences and return to Illustrator, you can now press command, spacebar and click to zoom in and you can press command, option, spacebar and click to zoom out just like so.

Alright, now there's one more way to work. I'll go ahead and reset things by pressing control, zero or command, zero on a Mac, which once again, goes ahead and centers the active artboard onscreen. You can also zoom using the scroll wheel using your mouse, and to do that, first go ahead and place your cursor over the portion of the illustration that you want to zoom into and then press and hold the alt key or the option key on the Mac and scroll up with your mouse to zoom in like so or scroll down to zoom out.

So once again, you need to have the alt key or the option key on the Mac down for that trick to work. And again, the position of your cursor matters. IF I go ahead and position my cursor in front of David's face and alt, scroll up or option, scroll up on the Mac, then I'll magnify David's face here on screen. And so you have a few keyboard shortcuts to remember. Once again, that's control, spacebar or command, spacebar, click to zoom in. Control, alt, spacebar or command, option, spacebar to zoom out and then finally, press the alt key or the option key and scroll up and down with the scroll wheel on your mouse to zoom in and out on a specific detail of your document here inside Illustrator.