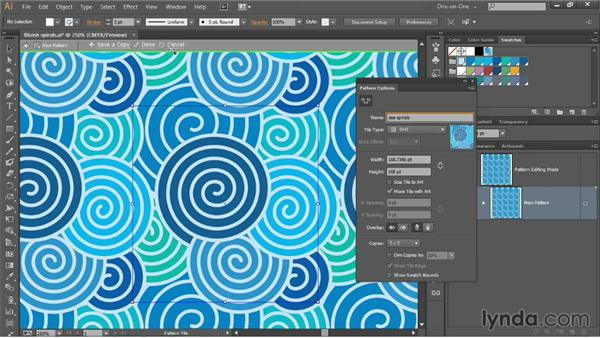 In this movie, I'll show you how to turn this collection of spirals into a seamlessly repeating pattern using the pattern generator. I'll also introduce you to the pattern options panel. You'll want to start things off by pressing Ctrl + A or Cmd + A on the Mac to select all of the spirals that you've drawn so far. Then to turn them into a pattern. Go up to the Object menu, choose Pattern, and choose Make. You'll see an alert message that's telling you that a new pattern has been added to the Swatches panel.

And if you take a look at the Swatches panel, you'll see that that's true. We have this tiny, little, new pattern swatch. Which, so far, goes unnamed. Also note that any changes made, in the pattern editing mode, will be applied to the swatch upon exit. That's very important. When in doubt, Illustrator goes ahead and saves your changes. And, we'll see what that looks like before this movie's over. For now you can turn on the Don't Show Again check box if you like, and then click OK. Now notice that you'll see the pattern option's panel somewhere onscreen.

I'm going to move it over a little bit, like so. And next what you want to do is switch to this pattern tile tool, which is an independent tool that's at work inside this panel. So notice that currently my black Arrow tool is selected, at the top of the toolbox. As soon as I click on the Pattern Tile tool, the black Arrow tool is no longer selected, because this tool takes over. So Illustrator does offer a few hidden tools inside of its panels. Now you will see that you have this bounding box with a total of eight panels.

You can modify the size of the bounding box by dragging a corner handle or one of the side handles or a top or bottom handle as well. Notice as you do so, especially if you drag inward. You're going to move the spirals closer together. Now, I want you to look very closely, and if you do, you'll see that the strokes of the repeating spirals appear to be lighter in color than the spirals on the inside here. So, you see that? They look a little bit white. Around this area right here, whereas they look a little bit bluish in this region.

All of the strokes are the exact same color so they ought to match. Well, what's going here is we're seeing the copies dimmed. So if you were to change the dim copies value to say 20%, press the enter key, or the return key on the mac, then you will see some very light copies indeed. With some light strokes as well. If you want to see everything the way it's really going to repeat, then go ahead and turn this check box off and you'll see that all of the strokes exactly match. Now I'm going to go ahead and modify the size of this bounding box just a little.

And notice that I've got the height now set to 168 points which is exactly what I'm looking for. I want the width, and this is just because I was fooling around with things here, I want it to be 158.7345. Now you don't have to make it exactly that size, but I just want to make sure that all of the files I give you match. And now I'll press the enter key or the return key on a Mac in order to accept that change. Now I'll go ahead and click. Notice right there on this center point.

So you'll have to kind of hunt around for it inside the bounding box. But when you hover your cursor exactly over the center, you'll see that it lights up. And I'm going to drag that center point. Down to approximately this location on this second ridge on the inside of the spiral. So right about there. Again, I'm just trying to make sure that everything's as predictable as possible. You can totally go your own way. Finally, once you get things set up the way you like, go ahead and assign a name to this pattern. And I'm going to call mine sea spirals like so.

Now I'll press the escape key again in order to create that new pattern. And you can see that it's now called C spirals here inside the swatches panel. All right, let's see how it works by zooming out from the outwork. And I'll go ahead and select the rectangle tool which you can get by pressing the m key. I want to make sure that we're snapping to the art board, so I'll go up to the View menu, and choose smart guides or you can press Ctrl U or Cmd U on a Mac. And now, drag from the top left corner or the top right corner, whatever you like to do.

To the opposite corner like so in order to create a new rectangle. And I'm going to change the stroke up here on the Control panel to none. And then I'll click on the first swatch for the fill, and change it to Sea Spirals. Which is that pattern I just created. And just to be safe I'll press Ctrl + Shift + A or Cmd + Shift + A on the Mac, to deselect that rectangle. And now I'll switch back to my black Arrow tool and I'll press Cmd + 0 or Ctrl + 0 on the Mac. And then ctrl+, or cmd+, in order to zoom in, and I can see that I have seamlessly repeating patterns.

Now if you want to make any changes to your pattern, all you need to do is click on your swatch, here inside the swatches panel. And as I say, it's safer if the artwork is deselected, so if it isn't, press Ctrl+Shift+A, Cmd+Shift+A on a Mac. That way you're not going to modify the selected artwork. Then double-click on see spirals in order to return to the pattern generator and bring back up the pattern options dialog box, and I'm going to once again select the pattern tile tool. And I'm going to increase the size of the bounding box like so, just so you can see what a difference it makes.

So if I expand the size of the panel then I'm creating some white space between each one of the tiles. And you can also modify the ingredients of the tile pattern if you want to by switching back to any of the other tools here inside the tool box. So I'll switch back to the black arrow tool which I can get by pressing the V key. And then I'll click on this innermost spiral in order to select it. And I'll just drag it to an arbitrary new location like that. And you can see the entire pattern updates in kind. Now, to apply my changes, I either click on the done button or just press the escape key and that goes ahead and updates that filled rectangle.

Now obviously, that's not what I want. So, I need to undo my change. Well, that's actually more work than you might think. The first time you press control z or command z on a mac You return to the pattern generator mode and you bring back up the pattern options dialog box. If you press Ctrl+C (Windows), or Cmd+Z (Mac) again, then you'll undo your last change to the bounding box and so on. So in other words, you gotta undo each and every step that you applied. Or you can just press command or control z once or in my case twice, doesn't matter.

Just to get back inside the pattern generator mode and then click on the cancel button. There is no keyboard short cut here just click cancel and now I will go ahead and cancel that entire process and you will return to the good version in my case of the pattern. And one last thing I want to mention, I'll go ahead and zoom in here and we will see if we can make it out, notice here at 300 percent that I can see a vertical seam in my pattern and you may see horizontal seams as well. You may not see it in the video very well, but if you're working along with me, you'll definitely see it on screen.

This is a figment of illustrator's imagination, it's just a function of the screen preview. If you print this artwork, or if you export the document to a pixel based image format, by going to the file menu and choosing the export command. Then those seams will absolutely go away. But if you have any concerns whatsoever, go ahead and choose the Print command and you'll see those seams disappear. And that's how you create a seamlessly repeating pattern using the pattern generator here inside Illustrator.