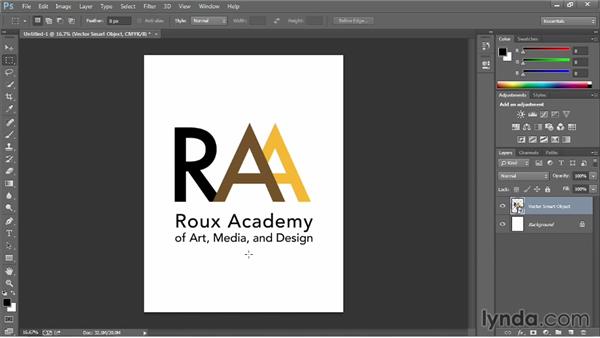 One of the benefits of having the Adobe Creative Cloud is the fact that you get access to more than just one application. And the fact that all of the applications play really well with one another, makes it even more great. So in this movie I'm going to show you how to take your Illustrator artwork and place it into other creative apps like Photoshop and InDesign. So first off let's start with Photoshop. I'm going to select the artwork, on my, art board here and I'm just going to copy it to the clipboard. One of my favorite things about Photoshop is the fact that it has, copy and paste support for Illustrator files. So I can just create a new file here.

And, I'll actually just make this, US paper sized, 8.5x11. That should work. And, once I get my new document open, I'm going to hit command Ctrl+V on my keyboard and I'm going to make sure that I choose smart object. You also have the option for pixels, path or shape layer. But a smart object is basically this protective wrapper that surrounds your vector outwork that you can in place in your Photoshop. You do have full control over this and it is scalable because it is still vector art wrapped in this sort of unusual way.

You'll notice that you get a new layer over here called vector smart object it does not say whatever the file name is. And that's because this is not actually a link to the file its not like in InDesign or in Illustrator where when you place something into the application. It becomes a linked file. Unfortunately you don't have that kind of relationship with Photoshop and other apps. When you place a file into Photoshop, it comes in as a smart object. And a smart object basically means that you can do stuff to it, and you can also make changes to it in its original environment, but it's not linked to anything. And so if I wanted to make a change to this for instance, I could double click on the smart object. Its going to tell me here in this dialog box that I need to make sure that I save it.

I'm just going to say okay don't show that again. Its going to jump me into Illustrator it's going to appear that this is the same file but if you look vector smart object and then here's other apps. So its actually a different file. I can make changes to this so I can double click, select and then let's just make a change let's make this black. And we'll make the text down here black as well. And then for this a right here, we'll change this to be something like, a bright orange. Something like that. And then this middle one. We'll have that one be sort of a dark, burnt orange. Something like this.

So now we'll double click to exit out. I'll save this, notice when I save this nothing happens over here. But if I navigate back to Photoshop now, it automatically updates the file with that change that I made. Even though you don't get that one to one relationship between photoshop and illustrator you do in a way have the ability to keep this file linked. What you have to do is make sure you save this as a psd document with the smart object intact. and you'll always be able to open it up in Illustrator and make changes. You can also undo whatever you just did by hitting Cmd or Ctrl+Z inside of Photoshop and it actually recognizes the Illustrator actions, and says okay, I'm going to undo that update that I just performed on that piece of art. Now InDesign is a little bit of a different story, if I navigate other to Adobe InDesign now, and create a new file, and I'll just hit okay to the default. I can place an Illustrator file in here by going to the file menu and choosing place out to my desktop.

My exercise files scroll down chapter 15 other apps hit open. And then I'll just place this somewhere in my InDesign document. And once I have that I can go up here to window menu and I can bring up the links panel. And you can see the links panel in, InDesign is much the same as it is in Adobe Illustrator. You have those same little icons along the bottom. You also have information about the file. I can collapse that up so you can just see this part right here. If I go back into Illustrator and inside of Illustrator let's close up that vector smart object first and let's only work on the other apps. And let's make some changes to this.

I'll zoom in a little bit. I'll double click to select the a want to make that red want to make the a over here a darker red. Maybe even more dark than that so let's. Really tone it down. There we go. And then this right here, we're going to make this sort of a lighter gray. And then the Roux Academy Text down here, we want to make sure that matches, so I'll jsut press the I key, and then click, that changes it. And then what I'll do now is double-click to exit. Save it. When I go out to InDesign, now, I see this little yellow icon with a exclamation point indicating something is wrong, and when I hover over it, it says modified.

I can actually click right here, and it updates it for me. I could also have just clicked the update button in the links panel, and it would have done just the same thing. If I go back into Illustrator, and undo those changes to get it back to normal, and save it hop back over in InDesign again hit the update button and it changes again. So you get that one to one relationship between Illustrator and InDesign but not Illustrator and Photoshop but no matter what managing your Illustrator files in other applications is pretty straight forward and pretty easy.

And given the power of these applications, I think you should absolutely work with all of them in conjunction with one another to really streamline your workflow.