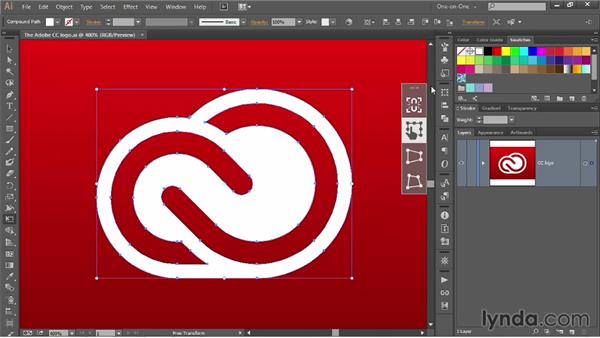 In this movie, I'll introduce you to the Free Transform tool. And I'll show you how it compares to the standard bounding box. Now you may recall back in the Fundamentals Course, now, one of the first things I told you to do was turn the bounding box off. And that's because it's clunky and it gets in the way. But there's no disputing that it's easy to use. Thing is, if you like the bounding box then you're much better off using the free transform tool, and let me show you why. I'll go ahead and click on this creative cloud logo that's represented as a compound path in order to select it.

And then I'll go up to the View menu, and choose Show Bounding Box, which has a keyboard shortcut of control+shift+B or command+shift+B on the Mac. And I will be using them in the future. And that brings up the good ol' bounding box here. And you use it, of course, by either dragging one of these corner handles in order to resize the object. If you want to resize the object proportionally, you press and hold the Shift key as you drag. Or you can move your cursor very close to a corner handle, but not quite on it, to this point here, for example, and then you get a rotate cursor.

And you can rotate the object by dragging. You can also rotate to 45 degree angles by pressing and holding the Shift key as you drag. And then, finally, you can stretch an object by dragging on its top or bottom handle, or one of the side handles as well. So you probably know all that stuff, but it gets much better with free transform. So, I'll go up to the File menu and choose the Revert command. And then I'll need to click on the Revert button in order to restore the original version of this object.

And I'm also going to turn off the bounding box by pressing Ctrl + Shift + b, or Cmd + Shift + b. And I'll click on the object to select it, and notice there's no bounding box in sight, you don't have to turn it off by the way to take advantage of the next option, but you might as well. And notice, down here, we've got the free transform tool. If you loaded e-keys, I've reassigned the keyboard shortcut to shift+e instead of just e by itself, because I went ahead and reassigned e to a tool I use more often, which is the eraser tool.

Anyway, I'll go ahead and select the Free Transform tool, and notice that you get a bounding box along with this big, huge floating tool box of alternative options. And you can move that thing anywhere you want, but it's gotta be inside the document window. Anyway, I'll just go ahead and put it back on the left side, since that's where it is by default. Now we'll start with how you can just drag the object around and move it. You can also move your cursor outside of the bounding box, and drag anywhere outside, notice this, and you'll rotate the object like so.

And you can press the shift key to rotate in 45 degree increments if you like, but I'm going to release the shift key so I an apply a free form modification. And you can also drag a corner handle in a 45 degree direction here to scale the object. If you press and hold the shift key as you drag, then you'll scale it proportionately. So all that stuff is pretty familiar. But notice this cursor right there. It's not just a standard scale cursor, it's a scale and rotate cursor. Meaning that if you drag in a direction other than 45 degrees right from the outset, you're going to end up rotating that object instead.

So in other words, the free transform tool responds intelligently to your gestures. One more thing to note is the different functionality of the side handles. So notice if I drag this side handle here, I get the skew cursor which is telling me that I'm going to skew the object vertically as well as scale it, by the way. And I'm really skewing the object with respect to its opposite side, which remains stationary. If you want to skew the shape without scaling it, then you press and hold the shift key, as you drag, like so.

If you want to skew the object horizontally instead, then you drag either the top or bottom handle, and you can skew and scale as you're seeing me do. Or you can press and hold the shift key to just skew, and not scale. Now if you want to take advantage of any of those constraints that require the shift key, but you don't want to have to press the shift key, then you select this first tool variation here, Constrain. And then, if I drag the top handle, for example, I'm just going to skew, I'm not going to scale. If I drag a corner handle, in order to scale, then I'm going to scale proportionally.

And then, if you drag outside the bounding box, you're going to rotate the object in 45 degree increments. But given that all you have to do is press the shift key to get those constraints, it seems a better idea to me to leave that constraint option off. And that, friends, is how you work with the intuitive and powerful free transform tool here inside Illustrator.