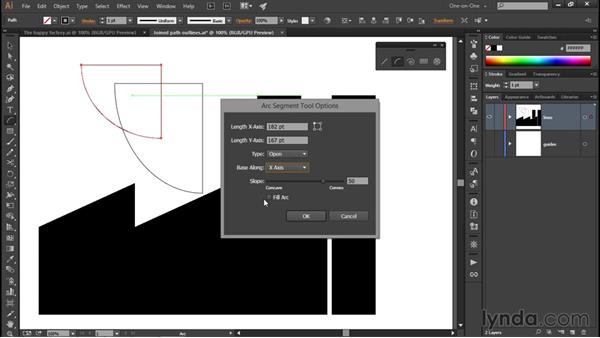 - Now at this point, you may be wondering if there are any other line tools on this tour, and the answer is yes, starting in this movie with the Arc Tool. So, I'll go ahead and switch back to my single column tool box. And you can get to the Arc Tool, either by clicking and holding on the Line Segment Tool and then selecting the Arc Tool from the flyout menu, or if you have your Line Tool set up as an independent tool bar, you can go ahead and click on the Arc Tool without bringing up a flyout menu. All right, now the Arc Tool draws smooth arcs as you can see right here, but what it's really doing is drawing quarter ellipses.

And by an ellipse, I mean a circle that's wider than it is tall or taller than it is wide. And so in this case, I've drawn one quarter of it and I could start over here and draw another quarter. And then, I could start, let's say right here, and draw this quarter and start here and draw another quarter like so. And so, you can end up drawing these, kind of, egg shapes if you want to. Another way to work is to press the shift key as you drag, in which case you will create a quarter circle. And again, you've got to keep that shift key down the entire time.

And notice, as soon as I release the ctrl key or the cmd key on a Mac, I return to the Arc Tool. All right, you can also do that thing where as you're dragging, you press and hold the alt key in order to create the arc from the center outward, so that's an option as well. I'll go ahead and delete that guy. And then I'll show you that you can click with the Arc Tool to bring up the Arc Segment Tool Options dialogue box, which allows you to specify where the arc is starting, so in our case it's going to start from the upper left corner but you can start from the lower right if you want to, just by selecting a different point right here.

I'm going to start, I think, from the upper left because I clicked around this area, and I'll change the length of the x-axis that is, how wide it is. Let's say to 200 points and it'll change the length of the y-axis, that is how tall it is, to 250 points. Notice that, you can draw a closed shape if you want to, which is going to give you a slice of a pie, as you can see if you click OK. So notice, that goes ahead and closes the shape like so. Problem is with that, that from now on that's the way the Arc Tool is going to behave.

So, if I draw another arc, it's going to look that way as well. And the only way to get that to stop happening is to click with the Arc Tool and change type to Open instead. Base Along is something I'll show you in a moment. You can fool around with it if you want to, but it makes more sense when you're drawing an arc on the fly. And then we have this Slope option, which also makes more sense on the fly. Fill, by the way, just goes ahead and fills the arc as opposed to just stroking it. All right, I'm going to click OK, and the only reason I'm doing this is to get Illustrator to recognize that I want Type to be Open for now on, so I'll click OK to create that arc.

And now I'm going to get rid of all three of these arcs by pressing and holding the ctrl key or the cmd key on the Mac to get the black Arrow Tool on the fly and then I'll partially marquee those shapes, and press the backspace key or the delete key on the Mac to get rid of them. All right, now let's say I draw an arc like this and then I draw another one like this, and that's not the direction I want this to go. And that's that x-axis versus y-axis thing. Why it makes more sense in the context of just drawing, is because what you do is you press the f key, just tap it. And why f, because that goes ahead and flips the arc.

And so, again, if I decided now that's not what I'm looking for, I can tap the f key in order to flip it the other direction. Another thing you can do is change how concave the arc is. So I'll go ahead and draw one like this and notice, as I'm dragging, so I've got the mouse button down, if I press and hold the up arrow key, I basically end up with a, kind of, rounded corner as opposed to a fluid arc. And then, if I press and hold the down arrow key, it starts going the other direction, and I can ultimately turn it into a round corner as well which is not what I want.

And now, I'm going to start dragging from the top of the smoke stack. You should see that vertical green line in the word intersect telling you you have your cursor in the right place. And then, go ahead and drag up and to the left. If your arc's going in a wrong direction, then you can press the f key to flip it, like so. I want my arc to be 109.5 points wide. That doesn't really matter because that's taken care of automatically when you snap to the vertical guideline, but you do want to care to make your height value 90 points if you want to get the same effect that I'm getting which is this line right here.

All right, now I want to scoot this line up ten points, so I'm going to press the v key to switch back to my black Arrow Tool and then I'll press the enter key or the return key on a Mac to bring up the Move dialogue box and I'm looking for what I have, which is a horizontal value of zero points and a vertical value of -10 points, at which point I'll click OK in order to accept that very small movement. And now, we want a really thick outline. Make sure you're filled, by the way. Your first swatch, up here in the control panel, is set to none. That is to say, you should see a white swatch with a red slash through it.

Your stroke should be black and we're looking for a line weight value. I'm just going to select it and change it to 30, a big, whopping 30 point line weight, which is going to give us this effect here. At which point, I'll just go ahead and click off the path outline to deselect it. And that's how you use the Arc Tool in our case, to draw the very first segment in our looping smoke here inside Illustrator.