Understanding what can and can't be part of a brush 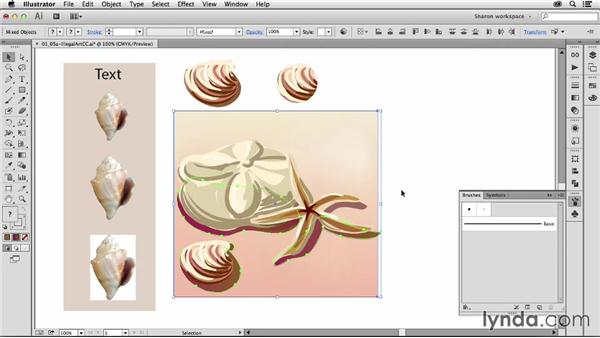 Join Sharon Steuer for an in-depth discussion in this video Understanding what can and can't be part of a brush, part of Artistic Painting with Illustrator: Object-Creation Brushes.

That Creative Cloud will continue to improve and increase the functionality of your program. So it's very possible that if this movie lives for a while longer. You're going to be able to make some of these things that I. Say can't currently do in your version. So test it out, prove me wrong. I'm going to try this first thing which is a linked image. And you can tell because of the X in it. There's no X in that. And also if you look up at the top at the Control panel, you can see this thing which says Unembed so it lets you toggle what this is and the opposite of unembed is linked.

So, that means it is embedded. So, I'm going to look at this one and this one has the opposite toggle which says embed which means it is linked. So, in order to include that I would have to turn it into that. But let me just show you what happens. If you drag in an illegal object. I'm going to just make it into a scatterbrush. Oh look, art pattern and scatter brushes can not contain linked images. Please use an embeddded image instead. So sometimes you will get a specific message.

And sometimes you will get the following message. This is a gradient mesh. Nope not as specific. The selected artwork contains an element that cannot be used in a scatter brush. So the key is here, if you drag something in that's containing multiple objects, there's a list of things that you can think of Assume that anything beyond a simple object could be a flag for Illustrator. But, you know, if I dragged in this entire image, I'm going to get that same error.

I still can't do it, so what else is there in here I bet you that said, yeah you can't use a gradient so if instead of making the gradient if I was going to just select those three and say okay I will simplify it I'll just make it a solid. I'll select it all again, de-select it the gradient mesh and I dragged it in and I try to make it into a scatter brush and it still couldn't make it into a scatter brush.

So for instance, let's say I don't remember what version of Illustrator I'm running right now, can I make this text into a brush object? And, yes I can. So, it's very easy to just experiment, see if it'll work. Here's one more thing which is a masked object. Indeed I can make a brush from a masked object which also means objects with transparent backgrounds. So one way in CC that you can create a brush from artwork that contains illegal objects like gradients or gradient mesh Is to rasterize it first.

Make sure to see the movies that deal with rasterizing later in this chapter for more about how to do that. And let's go to Illustrator CS6, and just get a feel for a couple of the additional things that you won't be able to use as a brush. So here we are in Illustrator CS6. I'm going to assume that things that I couldn't make into a brush in CC that I can't. So I'm not even going to try to move in the gradient mesh or the gradient. But I'm going to try to bring in oh, the embedded Shell, and let's do that.

I want to make it into a scatter brush and I get nope, selected artwork contains an element that cannot be used in a scatter brush. Okay, and actually, that has happened to me because I run multiple versions of Illustrator at the same time And I sometimes try to make a brush out of something I know I should be able to, and I get that error, and then I have to look up and see what version I'm in. So don't be surprised, just sort of go over it in your head. And this is another thing that you cannot make into a brush in Illustrator previous to CC, and that is a masked object.

I'm just going to show you, no you can't. And so the other thing that, just to be aware of, and we're going to cover that in another movie, is, when you can include raster objects in Illustrator CC, what the parameters of that are. Now, make sure to tune in to the symbols chapter, because you can actually, even if you don't have Illustrator CC You can make symbols out of raster images. And always remember, the latest version of the program that you have just test it, to see whether something else has been added to the list of things that you can make into a creative brush. 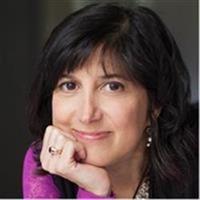 9/19/2013
Discover how to paint and draw with Adobe Illustrator's powerful object-creation brushes. In this course, artist and author Sharon Steuer will show you how to use art brushes, pattern brushes, scatter brushes, and brush-like symbols to warp, bend, repeat, stretch, scatter, and distribute objects along a path, and quickly populate scenes with complex groups of objects. You'll learn how to scale, colorize, and modify your objects; create different versions of brushes; edit the underlying paths; and fix common mistakes. You'll also see how to prepare artwork to make into brushes, resize brushes, and understand which brush or symbol is appropriate for different drawing situations. Plus, learn to paint with raster objects in dynamic new ways, and auto-generate corners for vector and raster pattern brushes.

See the previous course in the series, Artistic Painting with Illustrator: Natural Media Brushes, for Sharon's insights on more traditional tools like the Paintbrush and Blob Brush.
Topics include:

Video: Understanding what can and can't be part of a brush