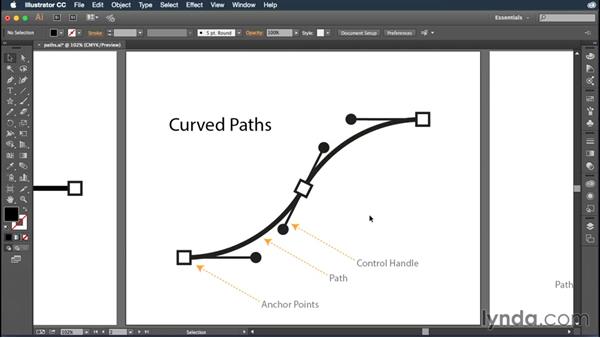 - Throughout this course, you're going to hear me use a term a lot, and that term is paths or vector paths, and so in this movie what I want to do is take a moment to discuss with you exactly what a vector path is and how it makes up the artwork that you see here inside of Ilustrator. So, there are three basic types of paths that we'll be discussing in this movie, straight paths, curved paths, and also closed paths. So, the most basic form of path is just a straight line path, and that is something where you just have a straight line like the one you see here, and that straight line is comprised of two separate elements, anchor points and paths.

So, the anchor points are these little squares that you see on the end of the path here. They indicate either the starting point or the stopping point for a given path. The path is just simply the line that connects both of these anchor points. Together, they make up this straight path, so you have an anchor point on one end, a path in between, and an anchor point on the other end. In addition to that, we also have curved paths, so in this document go ahead and double-click on Artboard 2. That's going to take you over to this curved path demonstration.

So you can see here these have been pulled up a little bit, so this curves up. These have been pulled down a little bit, so this curves down, and so forth. Finally, the last type of path that you will encounter is one called a closed path. So go ahead and double-click on the Artboard 3 in the Artboards panel. That will take you to this diagram. And so closed paths are actually what you will have after you've drawn out shapes, like polygons, stars, circles, and rectangles. That means that there is a starting and an end point that encompasses an entire area, so you start at the same place you end.

So for instance, if I was drawing a circle, I might start at this point, go all the way around hitting all these point in between, and then stop back at the circle. That closes the path and allows me to fill the inside of that path with a color. Now, there are times when you can apply color to certain objects that are not closed paths. For instance, this curved path over here, could technically have a fill color applied to it, but the color would only show up in the areas where the curved segment dips up or down, and that's because the color basically has nowhere else to go, so it's going to try to fill in the gaps of those curves.

Otherwise, the fill color is only going to reside inside of a closed path like the one you see here. Closed paths are comprised of anchor points, control handles, and paths much the same as the other paths. The only difference is these make up a whole shape. It doesn't have to be a perfect shape either. It doesn't have to be a circle or a square. It can be something really complicated. It can be something you hand-drew yourself, and as we continue to explore the drawing tools in this chapter, you'll become more familiar with exactly what I'm talking about.