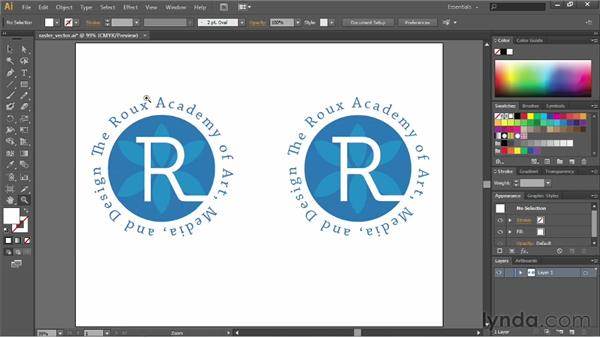 The main advantage of Adobe Illustrator, and one of the things that differentiates it from its pixel pushing counterparts, is that it is a vector-based image editing program. If you're new to Adobe Illustrator, you might not know exactly what that means. So in this movie, I will be walking you through exactly what a vector graphic is and how it can help you develop a more versatile graphic. So think of it like this. In traditional image editing applications like Photoshop, you're limited in terms of the output size or quality, based on the number of pixels or resolution that reside inside of an image.

This means he must constantly be aware of the DPI or PPI settings of your document, because the files are inherently resolution dependent. Now in some cases you can't get around this, like photographs for instance. Photographs cannot be taken in a vector format. They're made of pixels and they had to stay made of pixels. Therefore, that's when you would use a pixel-based image when you're working with photos or things that weren't necessarily created on a computer. In Adobe Illustrator however, we are working with a vector artwork. Anything we create inside Illustrator is a vector object, and this type of graphic is resolution independent, meaning that it will be just as sharp and clean at 3 inches or 300 feet.

With Illustrator, you don't have to worry about the resolution of the file at all, because the artwork can be scaled infinitely without penalty. How cool is that? You can create artwork inside Illustrator that is vector based and then output it to applications like Adobe InDesign and use that for output on things like business cards, letterhead, et cetera, and the vector artwork maintains its vector nature all the way through the process. In the other instances though, you will have to take the artwork out of Illustrator and put it into a pixel- based format for going to areas like the web, or tablet devices and things like that.

However, if you have a piece of artwork inside of Illustrator that you use for, let's say, a web button and let's say it's 200 pixels by 200 pixels wide, you can then come back in at a later date and use that same image for a different project, like let's say a web banner, where you have the blow it up 300% and the artwork will scale perfectly to that size without losing any of its quality. Let's take a look at exactly what I am talking about with these graphics that I have on my screen. As you can see I have two images on my screen that look pretty much the same, but on the left I have a raster representation of this logo and on the right I have the vector equivalent.

Let's first start off by taking a look at the raster-based image. If I grab my Zoom tool and I zoom in right here on the top part of this text, you'll notice when I zoom in that the text is very choppy and the edge of the circle around the flower is also really jagged and nasty looking. This is because this is a raster-based image that is based upon pixels, and those little squares you're seeing, those are the pixels. And so since it's not comprised of vectors, I get this pixelation.

Let's zoom back out a little bit and go over here to the vector object. I will zoom in on the same area over here. Notice how crisp and clean the text is and how nice the edge along the circle is as well. This is an example of vector artwork. Vector artwork is not made up of pixels at all. Vector artwork is actually made up of mathematical formulas that allow for the artwork to be scaled, up, down, whatever, and it doesn't lose quality. That's the beauty of vector graphics. Let's take a look at that.

I'll zoom back out and I'll grab my Selection tool and I'll select this raster object here. If I want to resize this object, I can do so. But when I do that you'll notice that the quality gets significantly worse, and if I zoom in on it, same area where we were before, you can see, it's so bad, pixelated and almost unreadable. Let's zoom back out and I will undo those changes, and I am just doing this with Ctrl+Z on my keyboard, Command+Z on a Mac.

I'll go ahead and come over to the vector object and select it. Watch what happens when I scale this. Scale it up and I'll zoom into the same area. The text is still completely clean and crisp; the edge of the circle is as well. Let me click away from it to get the guidelines away from it. See how clean the edge of that circle is? Unbelievable! So I could use this on a business card, on a flyer, on a billboard, on the side of a blimp, it doesn't matter.

This artwork is always going to crisp and clean, whereas over here on the raster-based image, I could only use this for an appropriate size based upon the resolution of the image. So if it's a 900 pixel graphic, chances are I'm only going to use it in something that's 900 pixels or smaller. In any case, there are uses for both raster and vector graphics, but hopefully, by now you have a better understanding of the differences between the two and how you can utilize vector graphics inside of Illustrator to create more flexible artwork and use them across multiple projects.