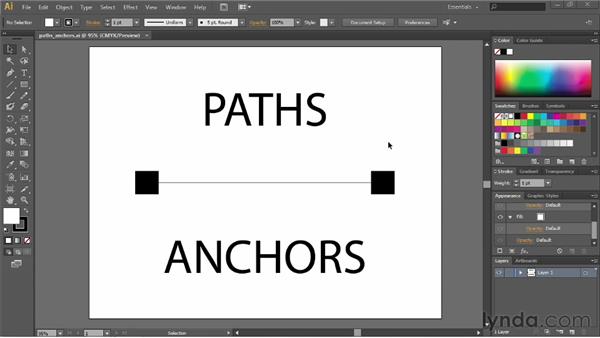 Throughout this course, you've probably heard me refer to the word path every once in a while when I'm talking about artwork that you see out in my artboard. In this movie, I'm going to be explaining exactly what paths are and why they're so important to your workflow inside of Illustrator. I've got this document open here which is called paths_anchors, and I've built this document to give you a better understanding of exactly what paths and anchor points are. Now we'll cover anchor points in another movie, but for now, let's worry about what paths are. Think of paths just like the word sounds.

It's a path, a path that you could walk down, a path you travel down. Your artwork travels down this path and uses it to make up the artwork itself. A path is nothing more than the straight line that you see here in between these two ends. The two end points are known as anchor points. Like I said, we'll get to those a little bit later. When you think of artwork inside of Illustrator, you have to think of paths because all vector artwork that's built inside of Adobe Illustrator is made up of paths. This is not to say the stuff that goes inside the path.

This is merely the stuff on the outside, the skeleton of the path, if you will. Paths are nothing more than the line segments that make up the overall structure of the artwork that you create, whereas the fills and the strokes and the effects and everything else that you pile on top of it, is just like clothing that goes over a skeleton. It doesn't matter if you're drawing out a basic rectangle or drawing out a vector portrait of somebody. Either way you cut it, you're always utilizing paths to do so. Anything you create inside of Illustrator is a path. For instance, if I draw a rectangle, that's a path, a path with multiple anchor points in it.

If I draw out a straight line, that too is a path. If I happen to come up and grab a circle, that's also a path. As I said, a path is nothing more than a skeleton that you throw things on top of to make it look like something. Basically when you jump into Outline Mode by hitting Command+Y or Ctrl+Y on your keyboard, you're actually seeing the underlying path structure of whatever artwork you have on screen. For instance, you see these two squares that I have filled right here on the artboard. If I were to jump into Outline Mode with Command+Y or Ctrl+Y, you would see the underlying path is nothing more than the square.

It doesn't actually encompass the fill at all. If I hit Command+Y or Ctrl+Y again, it switches back to show me the actual appearance of that path. So as we move forward throughout this course, anytime you hear me use the word path, I'm referring to the overall structure of whatever piece of artwork I happen to be working with. When I talk about the fills and the strokes and everything else, that's just clothing on top of the skeleton.