Understanding the parts of a magazine cover 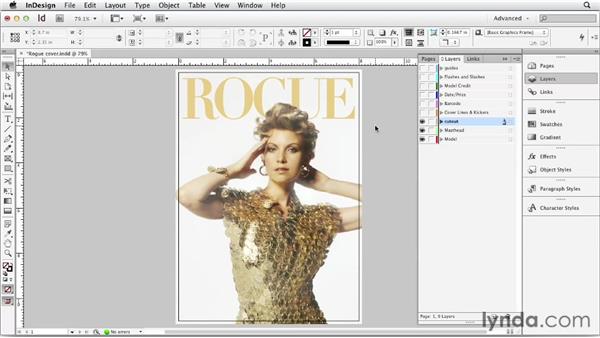 Here I'm going to identify the common parts of our fictitious fashion magazine. Of course, not all magazine covers have all these elements, and the emphasis given to them will vary. I have created this in InDesign using Layers, and using my Layers panel I'm now going to reveal these Layers one by one. I'll hold down my Option or Alt key and click on the bottom layer, revealing just the cover image by itself. Typically--and is the case here--we have a single image, and it bleeds to all four corners of the page.

This doesn't have to be the case, National Geographic and Time, for example, famously have colored borders surrounding their cover images. Monocle magazine, rather than using a single image, uses a grid of images. The model picture may be a full face or a body shot. I will be talking specifically about the choice of our cover image in the next movie. Next, we have the Masthead, and in the case of our magazine, the masthead has been created as a vector file in Illustrator and then copied and pasted into InDesign.

The conventional wisdom for the masthead is that it's best to use a fixed consistent masthead for easy identification. Some magazines placed their masthead against the flat field of contrasting color. While most magazines use a consistent masthead, there are again exceptions. In the early 1990s, Ray Gun magazine designed by David Carson changed his masthead every issue.

Here are a couple of other approaches. In the case of our magazine, the overlap has been created by putting a cut out portion of the image on a separate layer. So we have created a sandwich with the cut out portion at the top, beneath that the masthead, and at bottom the full frame cover image. Next we have the Cover Lines. Competition on the newsstand means that it's common to have many Cover Lines.

Because covers have become so crowded with Cover Lines, some magazines produce a separate subscriber's addition with fewer. Some magazines favor a poster style approach with a single often understated Cover Line, letting the cover image speak for itself. This works well when the cover model is instantly recognizable Other elements of our cover include the Barcode, which is used to provide a unique means of electronically identifying the magazine at all stages of the distribution chain up to the . final sale by the retailer Most commonly, the barcode is positioned in the bottom left, but it can be placed anywhere on the page so long as it doesn't interfere with the artwork.

The Date line and Price tend to be understated but should always be readable, set against a solid contrasting background, or a quiet portion of the cover image. Note that monthly magazine usually hits the newsstands a month before the cover date. You may also include a Model Credit, although it's more typical to include this on the contents page, rather than on the cover itself.

And then we have Flashes and Slashes, a flash above the top left-hand corner of the masthead and a sticker advertising a promotion. Finally--and this is entirely optional--I have created a layer of guides, and to see these, I am going to press W to turn on my non-printing guides, and this just gives me a framework within which I can work so that it takes some of the guesswork of where I place the different elements on the page.

So these are the parts of a magazine cover. We'll see how we can create this cover from scratch in upcoming movies.

10/8/2012
What makes a good magazine cover? Author Nigel French examines the design of magazine covers, dissecting the cover and explaining the purpose of the different components that make up the whole design. He then covers the design process from start to finish in Adobe InDesign, going on to show alternative workflows that exclusively use Photoshop and Illustrator. Each workflow shows you how to place and scale your image, position the masthead, add cover text, and package the end result as a print-ready PDF.
Topics include:

Video: Understanding the parts of a magazine cover