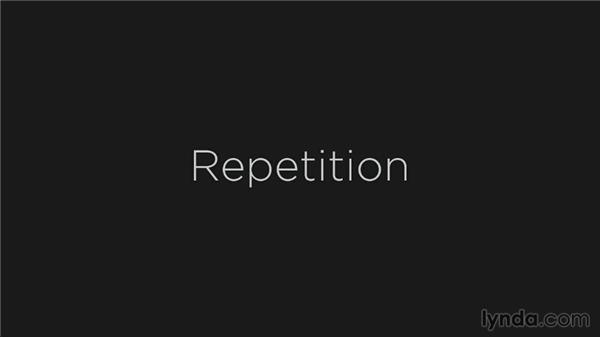 The theories of graphic design can be rather complex. In fact, there are four year colleges that build entire programs around these ideas. However, I get it. You don't want or need all that information right now. So I'm basically going to try to distill all four years of that information into four basic points, which we're going to call the PARC system. Now, unfortunately, I can't take the credit for developing the system. The idea that came from a book that I read some time ago called 'The Non-Designer's Design Book' by Robin Williams.

This book is been around for quite a while, but it remains one of my go to resources for new and inspiring graphic designers. I highly recommend that you check it out. Okay, back to the PARC System. Exactly, what is PARC? Well, PARC is an acronym for four terms that we will use to create better and more efficient designs. The P stands for proximity, the A for alignment, R for repetition, and C for contrast. Let's tackle these one at a time.

First up is proximity. The general idea here is that related items on a page should be grouped together, and they should also be separated from items that aren't like the ones in their group. Let's take a look at this business card, for example. At first glance, this card might not look too bad. However, when it's compared to this version, the one on the left looks extremely cluttered and messy. The one on the right looks simple and clean, which is what we want. You can see that the logo and company name are grouped and placed in the top left hand corner while the personal information is grouped and placed in the bottom right hand corner.

This not only groups items that are the same together but it also separates items that aren't like one another and also by staggering their position on the card. We've also achieved an informal sense of balance as well. Alignment is the second key aspect of good design. Items should be placed with purpose and in relation to other objects on the page, not just thrown about haphazardly. Again, as is the case with proximity, we want to use alignment to create a sense of balance. Look at these examples. Card number one is obviously a mess.

Everything's just sort of placed all over the page without any rhyme or reason. While card number two is much cleaner than card number one and well aligned, it also has a very one-sided appearance. Look at all that dead space over to the right. Card number three has a cleaner appearance than the first two, but it has no clear separation between the elements, and it also causes large amounts of whitespace on either side of the design, making it sort of all run together. Card number four has the right balance and alignment because it is visually the same weight on each side.

And both elements adhere to this sort of invisible border that is represented within the piece. Repetition is our third principle. When we talk about repetition, we mean that we are creating a consistent look across our designs by repeating elements like colors, graphics and layout styles. For example, if we were creating a brochure, we might reuse some of the elements from this cover image, for example, inside of the brochure. As you can see here, we have similar dark rectangle shape on the bottom of each page.

We're using the same color scheme and font on both pages, and overall they have a pretty unified appearance and suggest that they go hand in hand with one another. We would also want to carry this design pattern over into other pieces that we create for the company as well. Like an envelope for instance. See how I've used the same dark rectangle shape over on the left hand side, and the colors and fonts all match the previous design that we were looking at? Creating repetition is the key to having consistent design styling in your work. This is very important, especially when you're creating business collateral like business cards, flyers, and letterhead.

You want it to be instantly recognizable to your customer or viewer that this is your company being represented here. The final piece of the PARC puzzle is contrast. Contrast means to create a substantial difference between items that are dissimilar on your page. This is one of the most important elements of design. And the easiest way to direct the viewer's focus as they engage with your work. Let's take a look at our logo element for Houston Aeronautics. We've used a bright, bold color up top, which helps set the stylized H apart from the rest of the type.

And we've also used two different typefaces to call attention to the company name, and also what they do. Here, we also have the title slide from a presentation. Which has the logo element in very dark colors, set against a light-colored background. Making it very easy to draw the attention of the audience to the center of the slide. You'll also notice on these interior slides that we use a plain black text element on a white background to keep the viewer's eyes focused on the content of the presentation.

You always want to attract, but never distract, when it comes to using contrast. As you can see, it's an easy way set certain elements apart from the rest of the design. And it really helps you tell the story that you want to tell. Okay, let's review. In the PARC system, we have four main ideas. Proximity, which states like objects should be grouped together and separated from non like objects. Alignment, which states that visual elements on a page should have a connection with one another and be placed with purpose. Repetition, which tells us that elements like color, text and graphic patterns should be repeated throughout our design and other designs with similar purposes.

And finally, contrast, which tells us that we should create definitive differences between objects on the page that aren't similar to each other. Like headings and body copy or logos and personal information, for instance. The PARC System, while simple, is a tried and true method for improving your designs, and it's a great place to start when you're first starting out. As we continue through the course, be sure to keep all of these ideas in the back of your mind. I think they'll really help you on the projects that we're going to be working on.

4/17/2014
Not a graphic designer? No problem. In this course, staff author and designer Justin Seeley shares graphic design secrets anyone can apply to make their business documents look great. No graphic design knowledge necessary!

Justin breaks graphic design into an easy-to-follow acronym, PARC, or proximity, alignment, repetition, and contrast, and shows how to apply these principles to everyday design challenges. He also shows how to use the two major tools in a designer's arsenal, typography and color, to grab attention and set the appropriate mood for your documents. Then you'll work together on four different design projects that you might encounter in any office: a business card, an envelope, a flyer, and even a presentation.
Topics include: