Transforming with respect to the center 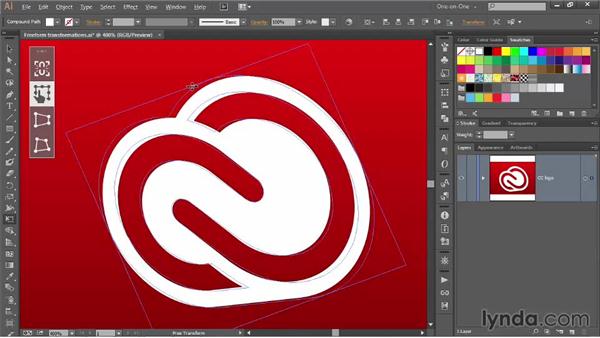 In this movie, I'll introduce you to the Alt or Option key variations, which allow you to scale and skew with respect to the center of this shape. And also show you how to change the origin point for a rotation. I'll start by selecting this skewed shape with my Black Arrow tool. And then I'll switch back to the Free Transform tool. Now, notice, if I drag a corner point with the intent to scale, but I'm always scaling with respect to the opposite corner. And this is true even if I drag this little origin point to a different location.

I'm still scaling with respect to the opposite corner. The only alternative is to scale with respect to the center. And you do that by pressing and holding the Alt key or the Option key on the Mac as you drag. If you add the Shift key, so in this case I'm pressing Shift and Alt or Shift and Option on the Mac, then I scale the shape proportionately with respect to it's center. If you want to do the same thing while skewing, so in other words, if I drag, for example, the top handle to skew and scale the shape at the same time, the opposite side is stationary.

If I want the center to remain stationary instead, then I press and hold the Alt key, or the Option key on the Mac. If I want to skew only, and not scale, with respect to the center, then I press both the Shift and Alt keys, or the Shift and Option keys on the Mac. And you might figure that something like that would work while dragging with the intent to rotate as well. But, the Alt key doesn't have any functionality when you're rotating,and of course that goes for the Option key on the Mac.

Instead, you're always rotating with respect to that transformation origin right there. So it's really just a rotation origin point. So, if you want to rotate with respect to an opposite corner, then you go ahead and place that origin point at that corner and then you drag like so. And in my case I've also intiated an auto-scroll which, of course, is not something I want. Anyway, I'll go ahead and reset my zoom by pressing Ctrl+0 or Cmd+0 on a Mac. If you want to reset that origin point, you just double click on it, and that's going to set it right back there in the center of the shape.

And that's how you take advantage of the Alt or Option key variations which specifically allow you to scale and skew a shape with respect to it's center.

Video: Transforming with respect to the center