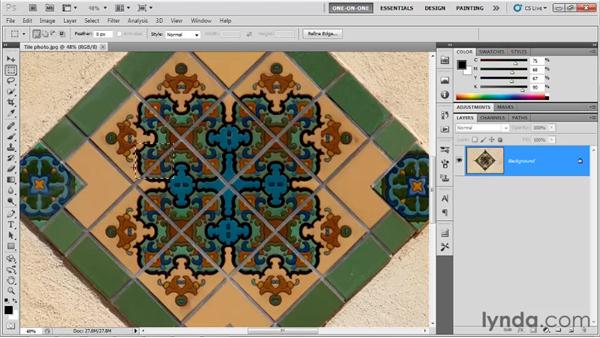 We are going to start this project differently than we have in the past. Rather than beginning with the blank artboard and creating an illustration out of whole cloth, we are going to trace a base photograph. Now when I say trace, I don't want you to take that too literally. I don't mean that we are going to scrupulously reproduce every single design element that you see before you're on screen right now, because after all, what would be the point of exactly replicating somebody else's piece of artwork. Instead, we are going to use this photograph as the basis for our own unique design as you will see.

The photograph in question is Tile photo.jpeg. It's found inside the 06_transform folder. Just to establish things, I have this photograph opened inside of Photoshop. I am going to go ahead and zoom in on it and I shot this image, I should tell you, using an E30, which is an absolutely great digital SLR from Olympus. And we are going to take this photograph and we are going to trace it here inside of Illustrator. Now notice this is the final illustration that I created the first time around, and it's called Final mosaic.ai, found once again inside of the 06_transform folder.

Notice I have made some different design decisions here and there. If I return to the original photograph, you can see that there this flower element right there in the lower- left corner of this area, and then over here there is a kind of leaf element or some sort of bug or something like that going on, and then in the corners of the mosaic we have an entirely different flower element. Whereas, inside of my final illustration, I chose to go ahead and replicate this flower element again and again and again throughout the illustration.

And I decided to do that to simplify the project just a little bit. I also happen to like the result. So again, you can go your own way. Here is the news though that I think you will be interested in, you are going to be building all of these elements completely on your own, which may at first seem a little daunting specially if you are fairly new to graphic arts in general or Illustrator specifically, but we are going to take this one step at a time and I assure you, you are going to be able to follow along. So let me show you how we are going to get started. What I like you to do if you are working along with me is switch to this illustration right there, it's called Base guides.ai.

Again, it's found inside the 06_ transform folder and all it contains is an empty drawing layer and a guides layer that contains just three guides, a horizontal guide, a vertical guide and a parameter guide as well. And this will serve as the basis of our illustration, and I will show you how to introduce the base photograph so that we can begin tracing it in the next exercise.