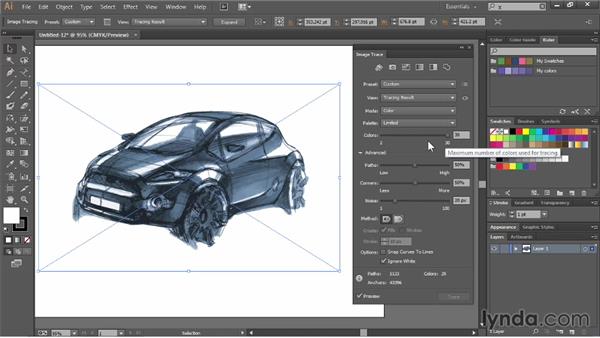 Up until now, we've been working primarily with photographs when it came to the Image Trace panel. But undoubtedly, the most common use for the Image Trace panel is taking something like a hand drawn sketch or illustration, or a logo that's been scanned in, and converting that line art drawing into scalable vector art. And that's what we're going to be talking about in this movie. How to take raster versions of line art and recreate them into a vector form. So, I'm going to go to the File menu > New. And this time I'm just going to choose something like a Print preset and letter, and we're going to make sure we're in a Landscape Orientation, hit OK. Then, we're going to hit File > Place.

This time do car_sketch and place it into the document. It doesn't matter where you place it, just put it somewhere in there. And once I get that out on screen, I'll move it so you can see it. I basically want to take this sketch and I want to convert it into vector art. The key is going to be picking the right preset. If I were to choose something like Technical Drawing or Sketched Art or Black and White logo, for instance, it might not be exactly what I'm looking for. Like for instance, this is Line Art because its drawn with a series of lines. But if I pick Line Art from that preset and watch what it does, you're going to be amazed at how bad it is. Absolutely terrible.

It looks like a bunch of ants running around my screen. Let's say I chose something like Technical Drawing. This is going to go through, it looks even worse. So, finding the right starting point is the key. I'm going to turn Preview off. And we're going to go in and I'm going to choose something like Sketched Art. When I do, that's going to turn it on. That looks okay, but it doesn't have any colors. Easy way around that is to change this, from Black and White, to Color. And then, the limited palette here, what we're going to do, is we're going to scale that back to something like 30 colors. And, when it finishes, it actually looks really smooth. And if I zoom in, you can see it's not very chunky. It looks like a pretty good representation. And I did that just with a few clicks.

All I did was take the Sketched Art preset and change the palette from Black and White to a limited color palette with 30 colors. Sometimes you get lucky, sometimes you have to spend hours in here. I would still make some tweaks to this though. For instance, I really want this to have pretty good path fitting. So, I'm going to increase the amount of paths in here. And I didn't turn my Preview off, but this renders pretty quickly with this preset here. So, I don't really have to worry about it all that much. The corners here, I'm going to leave those right about the middle. There's probably as many straight lines as there are curved lines in this. So, I really don't have to worry about that. The noise value.

This depends on how much I want to pick up. I'm going to reduce this to something like five pixels. Let's see what this does. When I do that, it should pick up more detail in some of the areas of the car. Alright, now that that's finished you can see it's picked up a little more detail here on the side right around the gas cap. Also picked up some more detail here in the grill area. And so, that just helps bring back some of those sketch lines. Makes it more of a hand drawn look. Aside from that, I'm pretty much good to go. Let's take a look here at the Source Image versus the Tracing Result. Again, a pretty good conversion.

You can also see outlines over the Source Image to see just how close the paths are fitting. You can say just the outlines. You can tracing result with outlines or you can switch just between the regular Tracing Result and Source Image. It's going to be different for each project that you bring in here. And if you really want to dive deep and learn all there is to know about the tracing artwork in Illustrator, I really suggest you go check out that course. Otherwise, just take some time, play around with the presets. Like I said, it's going to be different for each project, but hopefully by now you've got a better understanding of what everything does in this panel. So that when you bring in objects, you can get the most out of this panel your on artwork as well.