Tracing eyes with the Ellipse tool 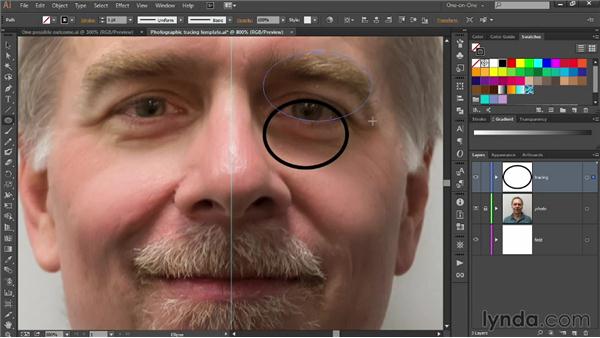 In this movie, we're going to trace the eyes, and we're going to do so entirely using the ellipse tool. So the first things I want to do is set up a vertical guide at the exact center of my document. And, just so that the guide is always visible, I'm going to create a new layer by dropping down to the little page icon at the bottom of the Layers panel, and I'll Alt+Click or option click on it, to bring up the Layer options dialogue box. And I'll go ahead and call this layer field, because it will eventually serve as a background for the avatar. And I'm going to change the color to magenta, again you can go your own way.

And now I'll click okay. And now I'm going to move the field layer below the photo layer, like so. Now I'll press Ctrl+R or Cmd+R on a Mac in order to bring out my rulers over here on the left hand side, and at the top of the document window. And before I create the guide, I'm going to go to the View menu, choose Guides, way down here, and then I'm going to turn off, Lock Guides. So if you see a check mark, next to Lock Guides, go ahead and turn off the command. And then, drag out a vertical guide for the left hand ruler, drop it any old place.

It should appear magenta if you made your Layer magenta. And you should see there's this little magenta square that's showing that the guide is selected. Then you want to go up to the options bar, to this align icon, click on it, and switch it to Align to Artboard, and now, you just want to click on Horizontal Align Center to place that vertical guideline right at the center of your document. And then go out to the View menu, choose Guides once again, and this time choose Lock Guides to turn it on.

And now we'll go ahead and lock that guide down. Now, you may still appear magenta. That's just a screen refresh problem. If you were to zoom out and then zoom back in, you can see that it changes to cyan. And now press Ctrl+R or Cmd+R in the MAC in order to hide the rulers. Now, that guideline should ideally, if you're drawing a face on portrait like I am, it should appear right down the center of your face. If it doesn't, what you want to do is unlock that photo layer right there, and then click on a photo to select it and move it until you see the vertical guide go right down the middle of your face there, in between your eyes.

All right, I'm going to go ahead and lock it back down though, because I want the template to be locked, and then you'll want to click on your tracing layer to make it active. All right, now zoom in on the document by pressing Ctrl+Plus or Cmd+Plus on a Mac, and go ahead and select the Ellipse tool from the Shape Tool fly out menu. And your keyboard shortcuts maybe a little different than mine, I've gone ahead and customized mine. And now I'm going to drag in order to trace the top edge of my eye, like so, and you'll also, as you're working, you'll want to press the Space bar in order to properly align the ellipse on the fly.

Now notice, at least for me, that I am not seeing any kind of fill or stroke associated with this ellipse. I'm going to assign the stroke by going over here, to this second swatch, up here in the Options bar, and I'm going to select black. Now notice that by default I get a one point line weight that's just fine, but I'm also going to click on the word stroke here in order to bring up the Stroke panel. And I want to assign a round cap and a round join. Neither of which are currently making any difference, but they will.

Now you want to draw another ellipse, this time along the bottom edge of the eye, in order to trace it. And you want to follow your eye as accurately as possible. In other words, you don't want to create a perfectly symmetrical eye. Mine kind of leans down and to the right, as you can see here. And the more accurately you trace, that kind of slope, the better you're going to convey your identity once you're done. Okay, so I'll go ahead and release at this location here. I might nudge things downward and I press the down arrow key, and notice how far I just moved that ellipse.

That's way too far. And that's a function of my keyboard increment. So I'm going to undo that move for now. And what I recommend you do, if you're working inside of a small document, as I am, is press Ctr+K or Cmd+K on the Mac, to bring up the preference's dialogue box. And then take the keyboard increment down to something like 0.2 points, which might seem very small, but it's very helpful as well. And now I'll click OK, and I'll press the down arrow key really just once, it's good enough, in order to move that ellipse into the proper location. All right, now what you want to do, is press the V key to switch back to the black arrow tool, Shift+click and that first ellipse, to add to that selection, and then go up to the Window menu, and choose Pathfinder in order to bring up the Pathfinder panel.

And the one we're interested in is intersect. So just go ahead and click on it, and you'll find the intersection of those two ellipses like so. Now go ahead and hide the Path Finder panel, and zoom in a little more. And I'm doing that by Ctrl-Space bar clicking. That's a Cmd+Space bar+Click on the Mac. And now I'm going to switch back to my Ellipse tool right there. And I'm going to surround the iris this time around. And you probably want to press the Shift key as you do, so that you're drawing a perfect circle, like so. And that circle might be a little bit big, and notice I'm using the space bar in order to move the circle around so that I can align it properly.

And I'll end up creating this shape here. And now, I'm going to start at this very center point. So in other words I want to make sure my pupil is centered on my iris. So I'll start dragging from the center point, and as I'm drawing I'll press and hold the Alt key that would be the Option key on the Mac. So I'm dragging from the center outward. Keep that key down by the way, and you also want to add the Shift key. So we've got the Shift and Alt keys down that's Shift and Option on the Mac in order to surround that pupil. And now, we want to leave the stroke intact by the way, that'll slightly open up the pupil, which makes for a more interesting eye generally speaking.

And now I'll go ahead and add a fill by clicking on the first launch up here in the actions bar, and changing it to black, as well. And now, I'll press the Escape key in order to hide that panel. Alright. The last thing I want to do is give myself a little bit of an eye wrinkle right there. That ridge that not only conveys how old I am, of course, but also conveys a smiling expression, which I would think we'd want. So I'll go ahead and draw another ellipse like this. And I'll move it over to about this location here.

And I'm doing that by pressing the Space bar, which allows me to move that shape on the fly. And when I get it right about there, I'll go ahead and release. I've got a fill which I don't want, so, I'll go ahead and change that first swatch to none. And now, I want to go ahead and clip this shape a little bit. So I'll press the escape key to hide that panel and I'll press Ctrl+Y or Cmd+Y on the Mac in order to switch to the outline mode, so I can better see my natural crease right there. And I'll go ahead and click and hold on the Eraser tool, and select the Scissors tool, and I'll click right at this location here and then I'll click right about there, as well.

And now I'll press the V key to switch back to the black arrow tool. Select the top portion of this shape by clicking on it, and press the Backspace key or the Delete key on the Mac to get rid of it, and then I'll press Ctrl+Y or Cmd+Y in a Mac in order to switch back to the preview mode. And that's how you go about tracing the fundamental path outlines, that will ultimately make up our first eye, here inside Illustrator.