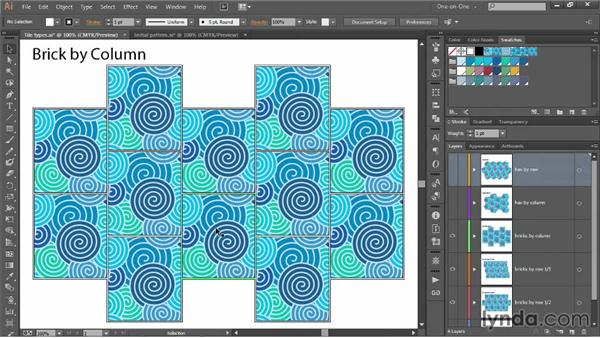 In this movie, I'll introduce you to the other tile types which include Brick and Hex. Now, one thing to bear in mind when you're working with pattern tiles inside Illustrator, is that every pattern tile is identical. So this guy is identical to the one on the left, and the one on the right, and the one above and the one below. Now by default, these patterned tiles are arranged in a regular grid as you see here. Just like tiles on a kitchen floor, but you can vary that if you like. I'll go ahead and switch over to my document in progress, and I'll double click in a C spiral swatch, here inside the swatches panel, to open up the pattern generator, and display the pattern options panel.

Now, notice how tile type is set to grid. If you click on that pop up menu, you'll see that you have two brick options and two hex options, I'll start by selecting brick by row and that goes ahead and aligns the pattern tiles in even rows, as you can see here. And each row is offset from the one above it and the one below. Now, to get a sense for what that looks like, I'll go ahead and switch back to my TileTypes.ai diagram, and I'll turn on the second to bottom layer bricks by row one half.

And we end up with this effect here. So, notice that the pattern tiles are still identical to each other. The only difference is that they're not offset. And the ration by which they're offset is one half, that is one half of a pattern tile. So, the seam, the vertical seam between this tile and the one next to it is exactly aligned to the centre of the tile below. But again, it's very important to note that each one of these tiles is identical. To change the offset, I'll go and switch over to the document in progress here, you take advantage of this brick offset option.

So for example, I can change it from one half to 1 3rd and that way each row is offset 1 3rd from one above it, so we move from this guide down to this guide and so on. 1 3rd of the width of the tile at a time. You can also change that setting on the fly if you like by selecting the pattern tile tool and then notice in addition to the eight squared handles you have two diamond shaped handles. One at the bottom and one up here at the top. I'll go ahead and drag this one at the bottom over to the left, and you can see that that changes the offset and it also adjusts the Brick Offset value in my case to 1 5th.

And to get a sense of what that looks like we'll go ahead and switch back to my diagram, and I'll turn on this layer Bricks by Row 1 5th. And we end up with this effect here. Again, each one of the pattern tiles is identical but the offset is different so starting with this top row we move the next row over 1 5th the width of a tile. And we do the same thing with the next row and so fourth. And you can change that to any of the preset fractions. Which, if I switch back the document in progress, include increments of one half, 1 3rd, a quarter, and of course, 1 5th.

Now I'll go ahead and switch over to my next Tile Type option, which is Brick by Column, and I'll change the brick offsets From 1 5th back to the default one half. And now you can see that all the tile patterns are arranged in vertical colomns and their offset from one colmn to the next. And that looks like this. I'll go ahead and turn on the bricks by colomn layer. Inside the diagram, and you can see now that we have identical tiles arranged into columns.

So, it's pretty straight forward, once you come to terms with it. I'm getting a little bit sick of these paths flashing onscreen, so I'm going to go up to the view menu and turn of the smart guides command. Alright now let's switch back to the document here. And I'm going to change the tile type from brick by colum to the next option down, hex by column. Notice that the brick offset value is now dimmed because you can't offset hexes. And you can acutally see the shape of the hex right there on screen. So it's an upright hexagon, which is to say that the top and bottom edges are exactly horixontal.

And as a result, we end up with columnes of hexes like so. Now this becomes a little bit harder to understand, which is why, of course, I've got the diagram. I'll go ahead and switch back to it and turn on the hex by columb layer. And this is what things look like. so now, instead of having rectangular tiles, we have hexagonal ones, but they are still absolutely identical to each other, and they are stacked on top of each other in even columns that are offset one half from each other. It just has to be that way.

So in other words, the horizontal line between these two hexes right there is a line to the centre of this hex to the right as well as the one to the left. Alright, I'll switch over to the document here, so I can show you the last option, which is Hex By Row. And we now get a hexagonal tile that's on its side. And that looks like this. If I switch back to the diagram, I'll turn on the Hex by row layer and we can see that we have these hexagons and they can be wider than they are tall, or in this case taller than they are wide.

In fact that doesn't matter for any of the tile types, but when you're working with Hex by row each one of the tile formations is offset one row after another. As we're seeing here. All right, so there's all the stuff you need to know. What do we do with it? Well, I'll go ahead and switch back to the document, and I'm going to change the Tile Type back to Hex by Column, which I find to be quite interesting, and I'm going to zoom out by pressing Ctrl+0, or Cmd+0 on a Mac. Then I'm going to zoom into 200% just so I can better see what I'm doing.

And by the way, if this hexagon isn't showing up very well for you and it might not show up that well in the video. Then you can go up to the Object menu, choose Pattern. And choose tile edge color, and then you can switch it to something that works a little better such as light red. Because after all blue against blue is not that easy to see whereas red against blue is going to work out great. So we'll go ahead and click okay. And now we can see this red boundary, and I could go ahead, and select the pattern tile tool, and then drag the handles in order to scale this guy to a different size.

But I have some specific width, and height values, that I've come up with in advance, and even though it's awfully specific, the width value that I'm looking for, if you're working along with me, is 217 point 6328, and I know that sounds ridiculous, but again that's what I came up with. And now I'm going to change the height value to the more sensible 180 in order to produce this effect. And I'm going to drag the center of the hex to right about there. She'll work out nicely. And now I'll press the escape key in order to exit the pattern generator, as well as hide the pattern options panel.

And I'll go ahead and zoom out from the document as well. And the result is a series of identical hexagonal pattern tiles arranged in even columns here inside Illustrator.