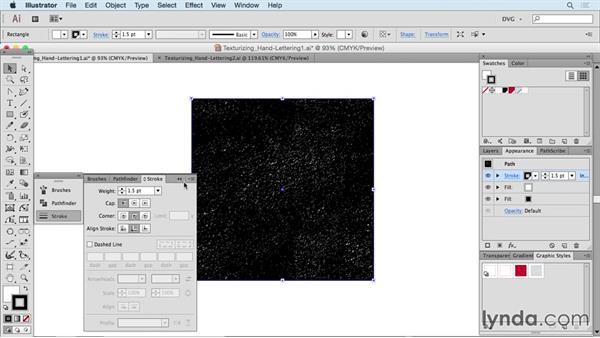 - Part of the visual charm of hand lettering…is its inherent texture.…When your draw out letterforms, the imperfections…that naturally occur during the process of drawing…are some of the very assets that make…this genre of design so appealing.…When you digitize hand lettering, however,…it's easy to lose some of that appeal,…so I'd like to show you how you can use the Appearance panel…and graphic styles in Illustrator to create and apply…authentic texture to your designs.…

When you draw hand lettering, the best part about it…is it looks like hand lettering.…It doesn't look like a font,…it doesn't have the precision factor that most fonts have.…Now, I know there's certain fonts that look grungy…but they don't look very authentic.…Especially the larger you use them,…the more unauthentic they look,…and they kind of look cheesy…so it's nice to have well-drawn hand lettering.…Here's an example of a hand lettering I drew out.…

If I zoom in on this you can see that it's imperfect,…meaning the edges of the hand lettering itself…