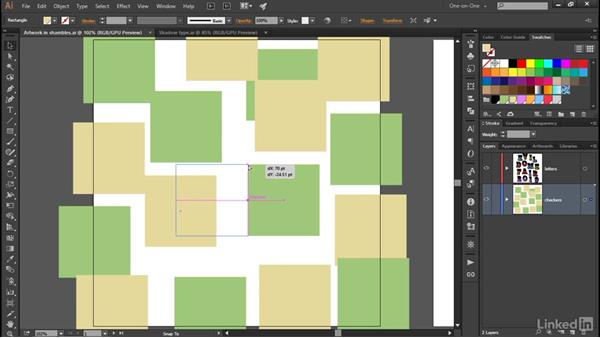 Join Deke McClelland for an in-depth discussion in this video Snapping and smart guides, part of Illustrator CC 2015 One-on-One: Advanced.

- [Voiceover] Over the course of this chapter, we're going to take this mess of a document with all these squares on the first art board and this strange text on the second one and we're going to arrange it to create this highly structured piece of artwork right here. And, we're going to do so almost exclusively using Illustrator's highly-developed alignment and distribution functions. So, I'm going to go ahead and switch over to our starter document and press Shift + Page Up in order to go back to the first art board. We're going to start things off with Illustrator's simplest alignment functions which are Snapping and Smart Guides.

And so, for example, let's say I want to move these four central squares into alignment with each other, then I can click on any one of them to select them and assuming that my Bounding Box is turned off, I can drag this square by one of its corner handles. And let me just make this perfectly clear. Notice if I went to the View Menu and I chose Show Bounding Box in order to turn the Bounding Box back on, then if I were to attempt to drag by a corner point I would end up scaling the shape. And, there's a lot folks who like to work that way and that's perfectly acceptable.

I don't like to work this way, however, because there's so many better ways to scale inside of Illustrator. We just saw the best one, which is the Scale tool, in the previous chapter. And so, I'm going to press Control + Z or Command + Z on the Mac to undo that change and then I'll go to the View Menu and choose Hide Bounding Box to get rid of it. And now, notice if I drag this corner point then I can drag it until it snaps into alignment with the top-left anchor point associated with this green square. And I know I've got a snap because my cursor goes from solid black to hollow white and I'm also seeing that Smart Guide that tells me that I have an intersection between the centers of the shapes.

And these are a function of two commands under the View Menu. First of all, you can see I have my Smart Guides turned on and then, if I were to scroll down the menu, I also have Snap to Point turned on. And I recommend, under almost all circumstances, that you leave that check-box on. The only time you would turn that command off is if the snapping is somehow getting in your way, when you don't want two anchor points to snap together. Alright, so I'll just go ahead and press the Escape key in order to hide that menu. Another way to work, by the way, because we do have Smart Guides turned on, is to just click on a shape and you can drag it by its center point, because this is a rectangle after all, or you could even switch to the rectangle tool nowadays which by default turns into a section tool when you hover over a selected shape.

And so, if you want to move the shape you drag it by its center point like so, and then thanks to the fact that I have Smart Guides turned on I can go ahead and move that guy into a position where it snaps into alignment with the other squares. And by the way, this is a function of this little icon right there which allows you to hide the shape widgets if you don't want them or, turn those shape widgets back on if you like this feature. And so, finally, I'll go ahead and select this guy by pressing the Control key, or the Command key on the Mac, which is going to get me my last-used arrow tool which happens to be the black arrow at which point, I'll just go ahead and click on that shape to select it and then I'll release the Control key or the Command key on the Mac and drag this square by its center point once again in order to snap it into alignment with its three neighbors.

And that's how you work with the simplest of the alignment functions, Snapping and Smart Guides, here inside Illustrator.