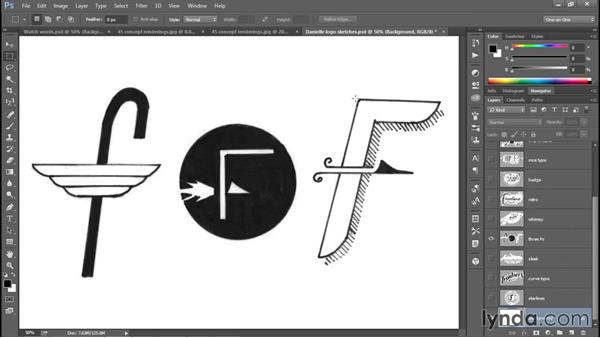 - In this movie we're gonna take a look at the next step in the logo development process, which is the sketching phase. In other words the point at which you sketch out some perspective designs. Now how you decide to sketch is up to you, of course. Some folks take pencil to paper, which is the way I prefer to work, but others work with tablets, or directly inside Photoshop, or even Illustrator. For this particular project I hired an outside designer named Danielle Fritz. I gave her the brand objectives, Magic, Excitement, Prestige, and Safety, and I told her to go nuts, come up with as many designs as possible.

Now the great thing about Danielle is she's not just a skilled designer, she can draw as well, which is always helpful, she's easy to work with, and she's super creative. So what I got back was a ton of stuff. 45 designs in all, which she collected in this monster JPEG file. Now how do I know that I'm looking at 45 designs? Well I counted them as you can see here. And I did so using Photoshop's Count Tool. Now if you're like most people you don't even know Photoshop has a Count Tool, it's been so long since I used it that I actually kind of forgot about it.

It's located right here in the Eyedropper Tool fly-out menu, and you can see that it's the very last option that's available. Now if you're using an older version of Photoshop you may not see it because it's only found in the Extended version of the software. But here inside Photoshop CC it's a standard tool. And you use it just by clicking inside the image, and then you can change the color, if you like, as well as the size and so forth. Anyway, as I say in all we've got 45 different designs to choose from.

And of course, it's not like I have to choose one of these designs and stick with it, in fact that's ultimately not the route I took. But every one of these designs provides us with a new angle. Now looking at all the designs in a single file is a little bit overwhelming, so I went ahead and put together this document right here, in which I've got different designs on different layers. So this first one here I like it quite a bit because we've got these stars on these wires, much like the old Greek notion of the firmament that the stars are actually held up in a sphere above the Earth.

In stark contrast of course, to what our customers will discover as they actually fly into that firmament. Next we've got this design which I think really tells the story. It's got the magic, it's got the excitement, the prestige as well I think. Next we have this very sleek design, that's quite interesting I think, quite modern. And in here we have some pretty bold designs in that they just feature the letter F, so we're not actually spelling out the name of the company, which can be a little risky, especially with a new company like this one, something that's just hitting the market.

So in the end this is gonna be the marketing department's job to make sure that this logo is immediately recognizable. Next we've got this whimsical design right here, I think it's a lot of fun, problem is we're not really flying a blimp in the air and I don't think the notion of a Graf Zeppelin necessarily imparts safety. Now this one's a lot of fun, it's got sort of that Disney quality to it. It looks a little bit too 50's diner however for my taste. This guy is also very interesting, it's a nice tight design, but it looks more like a badge, like a shoulder badge to me.

Now this one, I must admit, really struck me. It has a very modern treatment, very different than anything else I've seen and it really ended up sticking with me. Now we've got these guys. What I love about these designs right here, they do have a certain badge quality to them, like that design we saw a few moments ago, but they lacked ambiguity. So in other words, you know what these companies are up to. And they're pretty similar in that they feature some kind of spaceship design against an otherworldly background.

This guy in particular shows the moon up top and the earth down below, which I think is very clever. Next we have this design here. And I think it really does a great job of conveying the prestige and the safety, because this is a real, kind of shuttle silhouette that we have going. It is a very horizontal design however. If I switch back here to the big JPEG file that's got all the designs, you can see that it goes farther. We've got some additional stuff going on over here on the far left hand side.

So this column of designs are somewhat inflexible in that they have to be laid out in a horizontal fashion. Now at this point you may wonder, "Well, we've seen a lot of magic, and excitement "and a fair amount of prestige, "we haven't see that much safety." These two designs here struck me as pretty safe. This is quite the bulky looking ship here, so I think it's gonna hold up nicely. And certainly this flight attendant is gonna take care of us. But the one that really stuck out for me was this guy right here. It's is just such a bold design, it's nice and bright as well, we can tell that we're dealing with something (mumbling) to an airline company, and we've got this wonderfully rendered modern looking F.

And so for better or worse, this is the sketch that I decided to start with. And I'll show you where I went with it starting in the very next movie.

4/1/2015
Learn how to create an eye-catching logo from scratch and adapt it to fit a variety of applications: from business cards to banner ads. Join Deke as he works with art director Danielle Fritz on a logo concept for Frontiers Unlimited (a space tourism company with big ambitions!) and then as he vectorizes the design using Illustrator and Photoshop. He'll take you through every step in the process, from identifying the brand's objectives to creating the base artwork, adding typography, assigning spot colors for print, adding device-independent color and shading, and integrating some intriguing touches of photorealism. Lastly, he'll show how to change the orientation of the graphic so that it can work in many different layouts. In the end, you'll have a memorable logo that communicates your brand's personal or corporate values in a single glance.
Topics include: