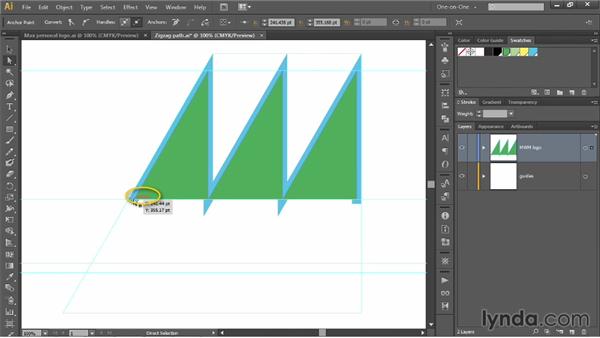 In this movie, I'll show you how to shave away angle and bevel joints, as well as projecting caps using a clipping mask. And this is pretty simple stuff by now, frankly. But hopefully it'll give you a sense of how to create your own precisely angles schematic artwork. I'll go ahead and switch over to my illustration in progress. And I'll zoom in as well, so we can take in more of the artwork. And I'll click on this zigzag path outline to select it. Now what I want to do is cleave away these miter joints at an exactly horizontal angle. However, if I were to do so in the traditional manner by clicking on the word Stroke up here in the Control panel and then changing the corner to a bevel joint.

You can see that I don't get the right effect at all. Instead what Illustrator's doing is, it is of course bevelling off the miters, but it's splitting the difference between the angles of the two neighbouring segments. And that's not what we want at all. So, we'll press Ctrl+Z, or Cmd+Z on the Mac, in order to undo that change. Now we're going to start things by adding a few path outlines based on the existing one. But first, I'm going to change the color of this stroke by clicking on the second color swatch and then switching out the standard black for a rich black so we get a nice, dark path outline.

And that'll help eliminate any trapping problems as well. Then I'll press Ctrl+C, or Cmd+C, on the Mac in order to copy this line. And now we want to create these little blue peaks up here at the top of the logo art. And I'll do that by switching back to my illustration in progress, clicking on a second color swatch right there and then changing it to this predefined shade of blue. And you can see that it's C65M15Y0K0. And we end up getting this effect here. Now go ahead and press Ctrl+F or Cmd+F on the Mac in order to paste in that original path outline.

And this time we want to add the green fill, which needs to be independent of the black stroke, for reasons that will become evident in a future movie. But for now, just go ahead and change the second stroke to None, and then change the fill swatch, the first one here, to this shade of green, which is C80M25Y100K0. And, you get this effect here. Alright, now let's go ahead and zoom back out here, by pressing Ctrl+0, or Cmd+0 on the Mac. And press the A key to switch to the Wide arrow tool, and then go ahead and click off of the path outline and select this lower left anchor point here.

Now it's very important that your smart guides are still turned on. Notice that you can see the word Anchor right there, when I hover over the Anchor Point. It's barely visible probably inside the video. But if you're working along with me you should be able to see a red word anchor against that green background on the left hand side. As you drag, you want to make sure that that red text changes to align 60 degrees so that we're keeping the angle of this line segment at exactly 60 degrees from horizontal. And then drag down until you intersect with the next horizontal guide down, and then release like so.

Then drag this lower right anchor point down, and you should see the words, align 90 degrees. Up there along that higher guideline. And then you should see intersect, along the bottom one. In which case, go ahead and release, in order to create this effect here. Now press Ctrl+F, or Cmd+F, yet again, in order to paste the final copy of that black zigzag line. Now you want to switch to the Standard rectangle tool, which you can get by pressing the M key. And draw a rectangle from this top horizontal guide down to the next guideline below it.

And make sure that you have plenty of room over on the right and left hand sides so that the clipping mask is as big as it needs to be. So, in other words, it's an over-sized clipping mask. We're only interested in clipping the top and the bottom precisely. Most likely, you'll end up with this big, thick, black stroke that doesn't actually matter. Just leave it there. Then press the V key in order to switch to the Black arrow tool. And Shift+click on the black zigzag line, and then Shift+click again, this time on the green filled path, in order to select them both.

And then you want to go up to the Object menu, choose Clipping Mask, and choose Make. And Illustrator will not only clip the paths below the rectangle, but it will also get rid of the stroke around that rectangle, and we end up with effect here. I'll go ahead and click in an empty region of the background to deselect the artwork. And I'll press Ctrl+; or Cmd+; on the Mac, in order to hide the guidelines. And then I'll go ahead and zoom in here. And notice that we have these exactly horizontal bevel joints as a result of that clipping mask.

And they're exactly where they want to be, and we end up with these blue peaks in the background as well. If you scroll down you'll see that we have some problems with the blue miter joints as well as projecting caps, but we'll end up resolving those issues in future steps. In any event, a clipping mask is all you need to shave away precisely angled bevel joints and projecting caps here inside Illustrator.