Shading a face with gradients 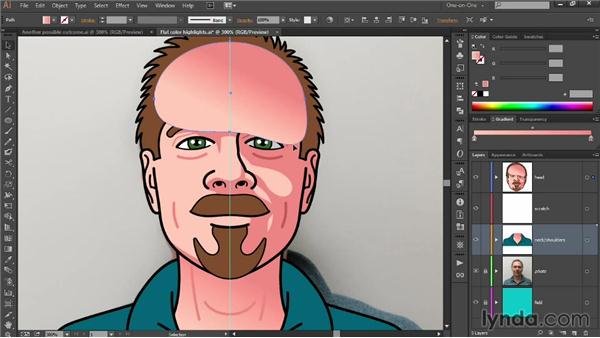 Join Deke McClelland for an in-depth discussion in this video Shading a face with gradients, part of Designing Your Own Online Avatar.

…Throughout this chapter we'll be adding some shading and texture…effects using gradients and tile patterns here inside of Illustrator.…We're going to start things off by creating the gradients…up here in the forehead, down here in the neck.…And, along the cheek, as well.…So, I'll go ahead and switch over to the illustration so far.…And, I'll click in this neck path to select it.…And, you want to click inside of it, the the way, so…that you select the filled path outline as opposed to the strokes.…

And then, make sure that your gradient panel is up on screen.…If you don't see it, you can go…to the window menu and choose the gradient command.…And if you switch to the color panel, you can also see that we've got…our fill swatch here inside the swatches…panel, that's a new thing in Illustrator CC.…But if you're using an older version of the software you…just need to switch over to the color panel and then…drag that fill swatch down to the gradient panel and drop…it right there at the beginning of the gradient, like so.…

Video: Shading a face with gradients