Setting up data in Excel 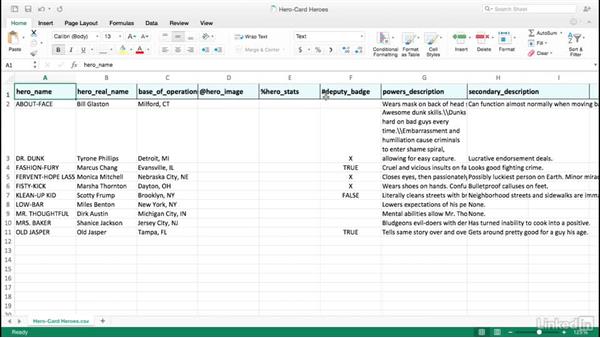 John Garrett provides instruction on the basic structure for setting up your Excel file for later importing in Adobe Illustrator. He shows that we don't have to convert xml to excel or do any manual conversions. instead, he describes the best practices for naming your headers, and explains about special characters necessary for specific types of variables.

- [Voiceover] In this chapter we'll be going over the basics of setting up your spreadsheet and how the different types of variables are represented in it. I'll be using Microsoft Excel to set this up, but if you don't use that program, you can also use OpenOffice, NeoOffice, Google Sheets or Apple Numbers. The goal is to export a comma separated value file, or CSV, that can be imported into Illustrator by the Variable Importer script. Any of the programs I mentioned can do that, so there are plenty of options. The basic idea here is that your columns are your variables, while your rows are the data sets that contain those variables.

So every time we click through the data sets in the Variables panel in Illustrator, we're just switching to another row in the spreadsheet. In general, however many columns you have, you'll have at least that many objects on your Illustrator art board. And for each row you have, you'll end up with that many separate files when you export, which we'll cover later in chapter six. With that said, let's check out the top row of this file. These are the column headers, and they'll match the names we gave to our variable objects in llustrator. For example, my first column is hero_name.

I'll switch back to Illustrator quickly and open up the name layer in the Layers panel. We went over the naming of objects back in chapter two, and we can see here that the type object on this layer is also named hero_name. I'll go back over to Excel now. The rest of the column headers will also match the name of an object within Illustrator. Matching the column names isn't strictly necessary, but it can spare us from having to do the manual binding step for our variables that we saw in chapter one. Another thing to be aware of when it comes to the column headers is that there can't be any spaces or special characters in the name, with only three exceptions.

It's a good idea to either use underscores like I've done in my spreadsheet, or eliminate spacing entirely. I try to keep my variable names human readable and descriptive, but they could be named almost anything, so you aren't forced to use underscores if you'd rather not. As for those three special character exceptions I mentioned, we can see them right here in my spreadsheet. In column D, there's an @ symbol in front of the header name. This symbol alerts the Variable Importer script that this column is for image data. Right now this column is blank, but we'll be filling it out in the next video.

Moving on to column E, the hero_stats header has a percentage sign in front of it. That sign tells the importer script that the column will be for graph data. This column is also blank now, and we'll go over putting in the graph data in a later video. Meanwhile, in column F, the deputy_badge header is preceded by a hashtag, also called the pound symbol or number sign. When that symbol appears in a header column at the front of the name, it tells the Variable Importer script that this column has visibility information. That's three special characters that correspond to three of the four variable types we learned about in chapter one.

That means any column header that doesn't have one of these special characters will just be seen as a text string, which is our fourth remaining variable. As a final note, it doesn't matter what order the columns are in. They don't have to match any layer order or variable panel order in Illustrator. As long as the header names don't have any illegal characters, they'll work just fine. So this is the general overview of what your spreadsheet should look like. But before we import, I'm gonna discuss some specifics of dealing with your spreadsheet that are important to know, starting in the next video with images. 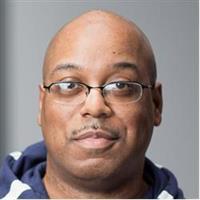 Video: Setting up data in Excel