Separating and enlarging a face 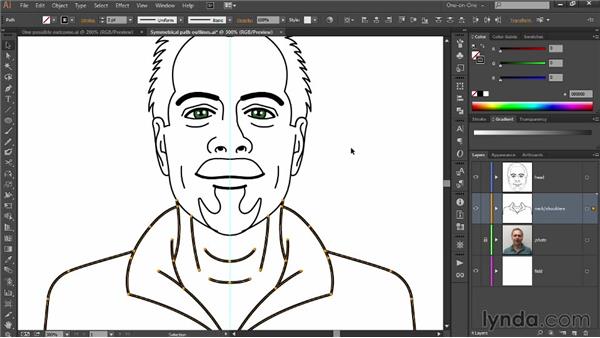 …In this movie we are going to separate the neck and shoulders…from the head, and then we are going to enlarge the head.…My reasoning once again being that we want…to exaggerate the most recognizable portion of your avatar.…So, I'm going to start things off here by creating a new layer, and I'll do that by…alt clicking or option clicking on the little…page icon at the bottom of the layers panel.…And I'm going to call this new layer…neck/shoulders you can call it anything you like.…

And I'll change the color to gold.…You have to do that, no you don't.…All right.…Then go ahead and click OK, in order to create that new layer.…And drag it below what is now called the tracing layer and…let's rename the tracing layer head because that's what it's going to be.…Now, go ahead and scroll down a little bit, make sure…you've got your black arrow tool and marquee these bottom most shapes.…So you should partially marquee through all the necklines and all…the clothing lines, whether they're my sweater or something of yours.…

Video: Separating and enlarging a face