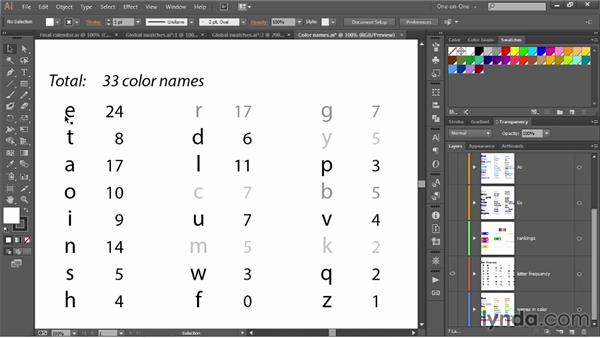 Once you've collected a lot of swatches inside the Swatches panel, it can become a little tricky trying to decide which swatch to apply when. In fact, it's a little bit analogous to assigning a font, inside of a document, which is why Illustrator allows you to search your swatches according to their name. But you can only do so from the color picker dialogue box. Which you bring up from the bottom of the toolbox. So the first thing I need to do is switch to the two column toolbox, which I'll do by clicking on the double arrow icon in the upper left hand corner.

That way I can see my fill and stroke options. I'll go ahead and double-click on the fill swatch to bring up the color picker dialogue box. Then I'll click on the color swatch's button in order to switch to this long list of swatches. Let me say you also see this column of colors in which each swatch is represented as a bar. And so you can go ahead and scroll through the list by dragging these triangles here. Or you can click on a color that interests you in order to advance to that swatch inside the list. Notice also that we have a little search field down here at the bottom.

So let's say that I want to search through these automatically named colors right here and I want to find the ones that include no K. So in other words, the K value should equal zero. I'd start by entering the letter K in the search field. And that's going to reduce the number of colors listed here to just those that contain a K, which would be the automatically named colors, these three colors right here, that I've named in advance that just happen to contain a K, and then up here at the top, we can see the CMYK red, CMYK yellow, and so forth.

Now, I'll enter equals zero. So, I've got K equals zero down here in the search field, and that means I'm seeing only, those automatically named colors, that include no black whatsoever, inside the list. I also see fewer colors represented here inside the column. And so now I could say, you know what, this purple interests me, I'll just go ahead and click on it, in order to select it from the list. And then, I'll click OK, and as soon as I do, notice that the fill swatch changes.

I'll go ahead and click OK, so I now have that purple listed as the default fill, and I can also see that color highlighted here inside the Swatches panel, and so if I were to draw a new shape, like so, using the rectangle tool, it will appear filled with that purple. Now I don't want that so I'll just go ahead and press the Backspace key or the Delete key on the Mac to get rid of it. What if you want to search for just those colors that you've taken the time to name? In that case, I'll go ahead and double-click on the fill swatch once again, click on the color swatches button and notice that here if I scroll down I've got a total of 11 colors starting with text coco broth and ending in Aztec gold, all of which I have named.

Well you can't do wild card searches inside this dialog box. In other words you can't enter some special symbol that will only find named colors. And you can't run or, or and searches, in other words you can't search for all the words that includes vowels, for example. Instead what you want to do is search for the most common letter. And the most common letter is E. And let me show you why that is. I'm going to cancel out of here, and I'm going to switch to this file, colornames.ai, in which I've assembled a bunch of common color names, starting with black white, and then red through magenta.

So red, yellow, green cyan, blue, and magenta and gray in both of its spellings. Because you can spell it either with an a or an e, it's up to you. And then I've got a bunch of other colors represented over here. Now, I don't pretend that these represent every single color name out there. For example, I do have lavender, which is a flower color, but I don't have lilac. I do have gold, but I don't have golden rod. So you get the idea. There's all kinds colors that you might use that are missing. I've got aqua and aqua marine, which are two different colors entirely.

Well, let's see how things shape out where the letter frequency is concerned. I'm going to turn off this bottom layer and turn on the letter frequency layer. And what we've got is totaly of 33 color names inside of this document. And then I have all the letters listed starting with e and ending with z over here in the bottom right corner. So we're seeing the letters listed in three columns in terms of their frequency in the English language. So e is the most frequently used letter. Just so you know I left out J and X.

CMYK are going to show up in the automatically named CMYK colors. So I recommend you don't search by those letters. So here's what I came up with. It's a little bit confusing, but if I turn on this rankings layer. You can see that I've crossed out R, G, and B as well as C, M, Y, and K. And then I've created a series of ribbons. According to how frequently these letters are used. Starting with blue for first place. Usually white is third place. (INAUDIBLE) So you've got red for second place, this kind of yellow for third place and so on.

So E comes in first, to choose 24 times, A comes in second, choose 17 times. N, who knew n was so popular, comes in third with 14 occurrences. L is fourth with 11 occurrences, and then O is fifth with 10 occurrences. So here's how that shakes out. I'll go ahead and turn off those two layers and turn on the ease layer. And you can now see all of the colors that include the letter E. And by the way, it only gets counted once. So I'm not counting two Es in chartreuse.

I'm just counting the fact that the E occurs in the word chartreuse at least once. So you can see a total of 24 of the colors have blue Es inside of them. 9 of the colors are dimmed showing that they have no Es. And then depending on how you spell gray, it may or may not be included. If you include the word blue along with navy, then you'll catch it with an E. If not, you won't. And then if your color's just aqua, not aqua marine, you won't catch it either. Let's see now what happens if you search by A instead.

Now as I say you can't do E and A. So you're not going to catch all the colors at one. But in separate passes, if I go ahead and turn on the As layer, then you can see the red letter As throughout 17 of the colors. And notice by the way, any of the colors that we already caught are light blue. If we haven't caught them before, such as tan, then the other letters are black. Aqua we would've caught just now if it weren't for marine. Navy we would catch just now if it weren't for blue. And gray we would catch just now if we spelled it with an A.

Then, if we run yet another search for the Ns, we end up picking up these colors. So, anything that's light blue now, we already caught by searching for Es. Anything that's pink, we also caught when we searched for As. And then pink, brown, indigo, crimson, and burgundy, we just picked up with the N. Which means that there's only one color outstanding which is gold and we could pick it up by searching for either the fourth most popular letter L or the fifth most O, and just so you can see everybody at work here I've got this top layer called big five, in which we see all of the search letters highlighted inside the color names.

So, let's see a practical upshot here. I'll go ahead and switch back to my document in progress and I'll double-click on a fill swatch in order to bring up the color picker dialogue box and then I'll click on the color swatches button. And I'll click in the Search field and enter the letter E. And now, in addition to CMYK red through magenta, the only one that we're missing, is Cyan. Which does not contain an E. We also have all 11 of my custom colors, starting with Text Cocoa Bronze all the way through Aztec Gold.

And so there you have it friends. Way more information than you ever wanted to know about searching colors by swatch name. Here inside illustrator