Script lettering with the Width tool 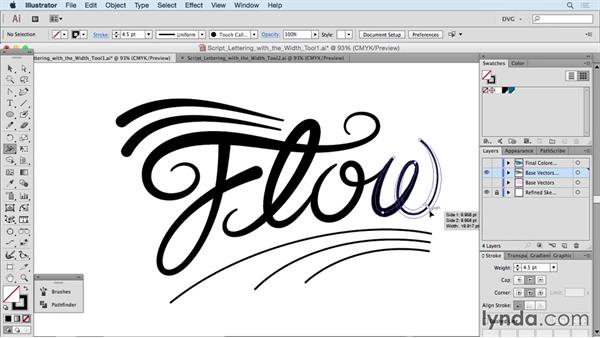 Join Von Glitschka for an in-depth discussion in this video Script lettering with the Width tool, part of Drawing Vector Graphics: Hand Lettering.

- Creating elegant, hand lettered script…is built upon an analog foundation…through the process of drawing.…You start with an initial rough sketch,…and you continue to refine it…until you have a refined sketch…you can begin building upon in vector form,…but craftsmanship in context of hand lettering…doesn't always stop when the drawing is done.…Many times that is just the first stage…of the creative process.…As you build out your hand lettered designs in vector form…you'll want to continue to scrutinize your shapes…and make micro adjustments along the way…to improve the aesthetics.…

Let me show you how I use the Width tool…and progressive art direction to create…a beautiful, hand lettered script motif.…Sometimes, the easiest way to achieve elegance…When you're working out a script type hand lettering project…is to utilize the Width tool in Adobe Illustrator.…This is one of my personal favorite tools in Illustrator.…I use it for a lot of different purposes.…

I really enjoy doing linear line illustration.…It works great for that because I can go in…