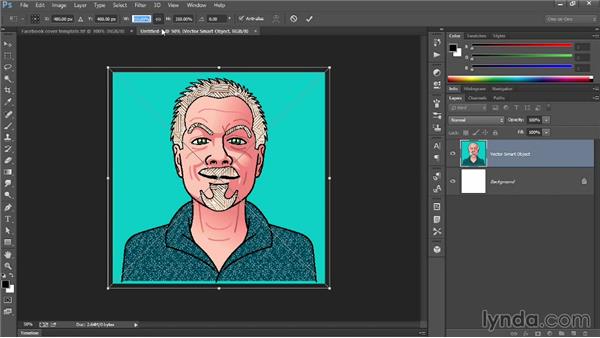 Join Deke McClelland for an in-depth discussion in this video Saving a universally compatible PNG file, part of Designing Your Own Online Avatar.

…In this movie, I'll show you how to export your artwork…as a ping image, suitable for posting to any social media site.…And just by way of example, I'll…imagine that we're creating a Facebook profile picture.…Now you can go up to the file menu, and choose to save for web command.…And that allows you to export your image as a ping file directly from Illustrator.…The problem is, your sizing controls are a little awkward.…I'll go ahead and for example take the width value up to…640 pixels, and press the Tab key in order to increase the size…of my artwork, and so that works, but the problem is that I…can't crop the artwork as well, which I desperately need to do here.…

Which is why in my opinion a better way to work, I'll go ahead and cancel out,…is to copy your artwork and then paste…it into Photoshop, which gives you better pixel-level control.…So, go to the Layers panel and make sure…that every layer that you want to copy is unlocked.…In my case, I need to unlock my field layer because…otherwise I won't copy that big, bright blue square in the background.…