Roughing in hair and other complex features 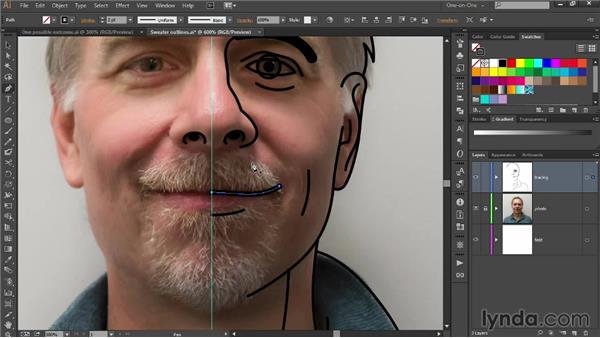 …In this movie, I'll be drawing the ear and the various hair elements.…Again, using the Pencil tool, combined with some other techniques.…So I'll start things off by selecting the Pencil tool, which…you can also get, once again, by pressing the N key.…And I'll zoom in on the ear here.…I'll pretend that my ear is not covered, let's say.…So I'll draw up and around the top of it and then down around the base of the…lobe like so, and now I want to add…a couple of other paths, including this guy right here.…

And then I will draw like so, in order to create this…little doohickey here, and that ends up looking pretty good with the exception,…of course, that I lost my round corners and joints, once again, so…I will press the V key to switch to my Black Arrow tool.…I'll marquee these three path outlines, and I'll click on the word Stroke up here…in the Options bar and click on both Round Cap and Round Join like so.…Another thing I like to do is move this segment a little bit outward.…And so I'll press the A key to switch to my White Arrow tool.…

Video: Roughing in hair and other complex features