Reshaping paths to enhance their accuracy 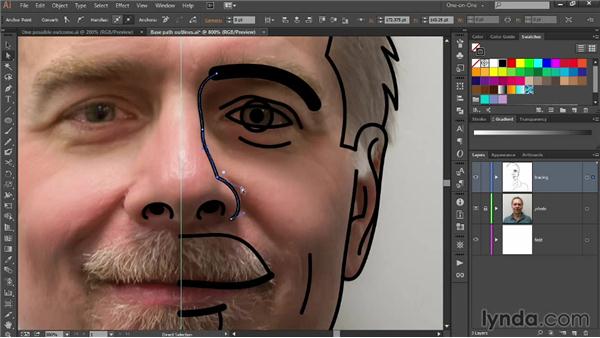 …In this chapter we're going to refine the path outlines that…we've created so far in order to create the completed face.…Now as you might imagine, we're going to be reflecting most of…the path outlines in order to create the other half of the face.…Which means that we need to make sure that…everything we have so far is in good shape.…Because, otherwise, it's going to be hard to maintain…this symmetry after we get done reflecting those paths.…So I'm going to zoom in on the hair.…And if I click on the hair with the black arrow tool, you can see that…I've gotta ton of anchor points on the inside edge and I'm not happy with that.…

So I'm going to go ahead and quickly redraw those.…And the first thing I want to do is switch to the scissors tool,…which I can get by pressing the C key, c for cat of course.…And then I'll click on this inside edge of the…sideburn in order to create a cut at that location.…I'll press the V key, to switch back to my black arrow tool.…I'll click on that inside edge.…And I'll press the Backspace key or the Delete key on the Mac to get rid of it.…