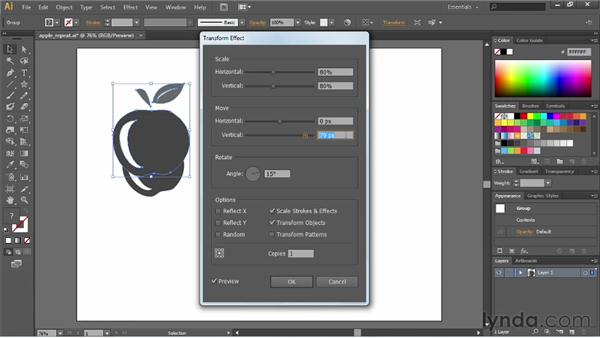 As you continue to work with transformations, there may come a time when you need to repeat a certain transformation or create multiple copies of a transformed object. In this movie, I'll show you how to work with multiple copies and also how to repeat transformations using both a keyboard shortcut and an effect. First of all, let's see how to perform basic repeatable transformations. I am going to select this piece of artwork on my artboard right here by clicking and dragging a selection around it. Once I have it selected, I can come over the top of it, hold down the Option key on Mac, the Alt key on PC, and once I see the double cursors appear, I can click and drag it to the right.

Once I have it where I want it, I'll release the mouse and release my Option or Alt key and I've created a duplicate copy just like you see there. If I hold down the keyboard shortcut, Ctrl+D or Command+D on the Mac, it automatically creates a duplicate of that object with the same transformation that I just applied. This could be spacing it out, rotating it, whatever it is that I just did, it goes ahead and remembers it and transforms it just like I had before. You can see it's the same distance from here to here as this one is from here to here.

Pretty cool! So I can go and create several different copies all the way across the screen. These are individual objects and they are not linked to the original one whatsoever. If I undo that by hitting Command+Z or Ctrl+Z and come right back to my original. Let's resize this a little bit, and I'll stick it right there. And let's go into the Effect menu and choose Distort & Transform and then select the Transform command. Inside of the Transform command, you can actually perform multiple transformations at a time and create copies simultaneously.

So in this case, what I am going to do is I am going to scale the object down 80%. That means each time that I recreate the object, the next one that I create will be 80% smaller than the one before. I'm also going to adjust the Horizontal and Vertical spacing, but I'll wait on that for just a moment. Finally, I'll rotate at 15 degrees and I am going to turn on my Preview. You'll notice when I turn on my Preview that it rotates the apple and it shrinks it down. But it's not exactly what I wanted; I wanted the original to still be there.

So I'll create a copy. Right here, I just hit the Up Arrow key and it creates a copy. Now if I wanted to change where this apple is positioned, I change the vertical positioning. So I'll just bump this up and I am just holding down my arrow key right now, until this gets exactly where I want it to go. Once it's cleared, I'll go ahead and create some more copies. You can kind of see the little swooping action that I am creating here. I can also change the horizontal alignment if I wanted to as well.

So I'll change that by moving it over a little bit. Now if I move my dialog box out of the way, you can see by creating these copies exactly what I'm able to do. So I'll create ten copies and let's actually shrink the scale down just a little bit as well; 75 and 75. If I change the Rotation amount, they rotate around like so. So I've created something where it looks like it's spiraling from the background all the way up into the foreground.

When I'm ready to commit to this change, I'll hit OK. You'll notice that when I do that, I still only got this one apple selected. That's because these are technically not individual objects as of yet. There's still one object merely transformed and repeated all the way around. If I were to make a change to this original object here, since all of these are linked to it, they would change as well. Watch what happens when I rotate it; they all rotate as well. If I scale it, they are going to get smaller as well.

It isn't until you break the link between these and the original that they become active objects that you can then manipulate on their own. In order to do that, what you're going to have to do is go up to the Object menu and choose Expand Appearance. Basically this means, take any of these live effects that I have applied to it and expand them out to be their own separate object. If I click that, everything becomes its own editable path. Once I've done that, I can then edit them individually and also transform them one at a time as well.

The unfortunate thing once you've broken the link is if I work on this first one, I can't automatically update the rest of them. So until you are absolutely sure that you're ready to break that link, I would just leave it alone. So in this case, I'll use Command+Z or Ctrl+Z to undo that expansion and now everything is completely tied to this one apple again. As you can see, when I rotate it here, all the rest of them follow suit. So again, this is how you create multiple transformations and repeatable transformations inside of Illustrator, utilizing some of the basic transformation tools as well as a live effect.