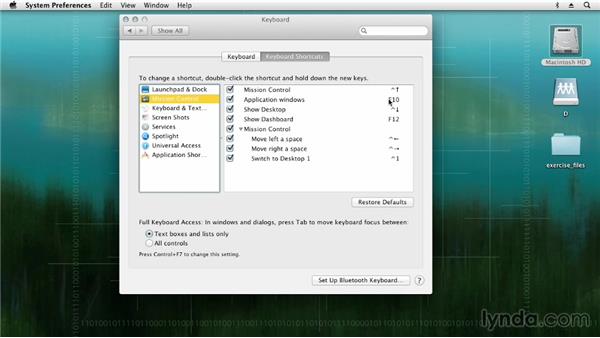 In this movie I'll show you how to remap a few OS level keyboard shortcuts on the Mac so that everything works as advertised inside Illustrator. And by the way, this movie is exclusively for Macintosh folks, if you're working on a PC you can skip ahead to the next movie. First step is to go up to the Apple menu and choose System Preferences. And then inside the big System Preferences dialogue box Locate and click on the keyboard icon. Now, we want to start with the keyboard tab here. So, go ahead and click on it, if it's not already visible, and then, turn on this check box.

Use all f1, f2 keys, as standard function keys. That way, you don't have to press that FN key all the time, except you will now have to press the FN key to do things like Change your monitor brightness and change the volume and so forth. So it's really up to you which way you decide to work but I prefer for this check box to be on. Then switch over to Keyboard Shortcuts. And you want to start with Launchpad and Dock. And notice this side, I'm Turn Dock Hiding On and Off. Its keyboard shortcut is command option D, which is what I've set for the Place command under the File menu.

So, if you want to work that way as well, you need to change this shortcut by clicking on it once, and then twice, in order to make that shortcut active, and then press the Control key along with D. And you'll now see a caret listed next to the D, which is the Mac's way of showing you the Control key. All right, now switch over to Mission Control, and from here, things could end up differing. Depending on which version of the operating system you're using, but what you want to do is hunt down any function keys that are listed just by themselves such as F10 and F12 here and change them to CTRL along with that key.

So for example once I highlight F10. I'll press control F10, and then I'll highlight F12, which is what I've been telling you is a great keyboard shortcut for reverting the image to its last saved appearance. But it's going to switch you to the dashboard the way things are, so go ahead and press control F12 for that guy. As well. Then you can switch ahead to Spotlight. Now both of these keyboard shortcuts interfere with your ability to zoom inside of Illustrator. So what I recommend you do is Highlight the first one and press Cmd > Ctrl > Spacebar so that you still have a shortcut for Spotlight.

And then for the next one. Press Command Control Option space bar, and you'll end up seeing this little option character. Alright, finally go ahead and switch over to universal access. And this is totally up to you. If you find these options to be useful then by all means leave them turned on. Or switch them to different keyboard shortcuts so they don't interfere with the ones that I added to Illustrator. But if you don't rely on, for example, screen zooming, then just go ahead and click a couple of times on that check box. Once to turn all the options on and then to turn them all off.

9/24/2013
This course is the third in a four-part series devoted to mastering the premiere graphics creation application, Adobe Illustrator. Industry pro Deke McClelland takes a project-based learning approach to the key features in Illustrator CC, including Recolor Artwork, transparency, masks, blend modes, strokes and fills, and dynamic effects. The course also covers techniques for creating custom gradients, designing logos, generating photorealistic neon text, and wrapping type around objects. Plus, Deke shows how to call up the most essential features by organizing your workspace and employing time-saving keyboard shortcuts, how to manage the color settings, and how to adjust a few settings to make the program work even better.
Topics include:

A: Deke updated 7 movies to reflect changes in the 2014 version of Illustrator CC. The movies cover Illustrator preferences, updates to blends, and more. Make sure to watch the revised movies (marked "UPDATED") to stay up to date.