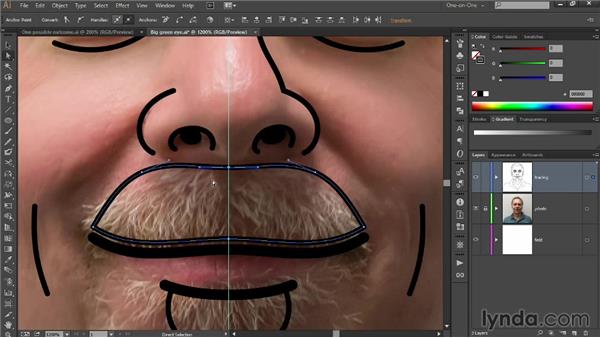 Join Deke McClelland for an in-depth discussion in this video Reflecting and joining symmetrical shapes, part of Designing Your Own Online Avatar.

…In this movie, we're going to perform the big flip,…and we're going to join together our symmetrical path outlines.…So I'll start by zooming in, by pressing Ctrl+0, or Cmd+0 on the Mac, and then…I'll press Ctrl+a, or Cmd+a on the Mac, in order to select all the path outlines.…Now, the only path outlines that we will not be reflecting…are the nostrils, because I've drawn both of them, and they're different.…So, I'll go ahead and Shift+drag around them, using the black arrow tools,…and you only have to partially marquee those path outlines to make that work.…

And then you want to go over to the Rotate tool, click and…hold on it and select the Reflect tool from the Fly-Out menu.…Now, go ahead and Alt click or Option…click as exactly as possible on that vertical…guide, and it's worth spending a moment or two to make sure that you are spot on.…And then go ahead and Alt click, or Option…click, in order to bring up the Reflect dialogue box.…In our case, we want the axis to be set to vertical, because after all,…