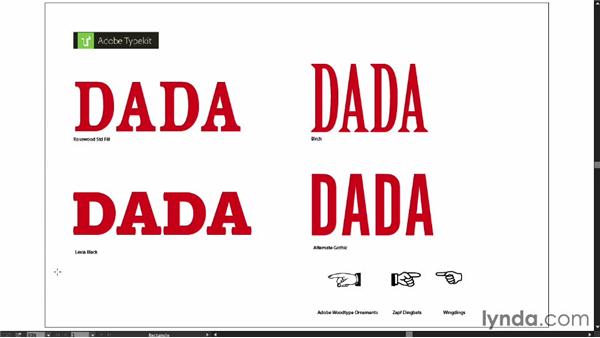 Join Nigel French for an in-depth discussion in this video Project overview and choosing fonts, part of Designing a Typographic Dada Poster.

Dada was an avant-garde European art movement that began in 1016 and lasted until the early 1920s. It started in Zürich, Switzerland in opposition to the First World War, and spread to Berlin, Paris and New York. Dadaism was primarily involved in the visual arts, literature, poetry, art manifestos, art theory, theater and typography. Dada rejected logic and reason, which it regarded as having failed to prevent the catastrophe of the First World War and instead prized nonsense, irrationality and intuition.

For this course, I've created a Pinterest board, to give you a flavor of Dada type styles. And for inspiration, you could access the board here. I've chosen to illustrate the text, not the old, not the new, but the necessary. A quote from Tristan Tzara one of the most influential members of the Dada Movement. Just a word or two about the logistics of my font choices. The dadaists were less concerned with choosing a typeface to convey a brand, the way designers are today.

And more about using whatever was at hand in ways that were unexpected and unconventional. To keep the look of your post authentic, choose typefaces that were designed prior to 1914 or there abouts. Or revivals of styles that were popular prior to 1914. I've chosen typefaces that are available on Adobe Typekit, so if you are following along and you have a subscription to the Creative Cloud, you have access to these same typefaces.

Which are all available for desktop use. Rosewood Std Fill. Lexia Black, which I chose as being a very solid slab serif. Mainly because Clarendon which is a favorite typeface of mine, was not available on Adobe Typekit. Birch, a wood type and alternate Gothic, which is a modern design typeface but references the Gothic sans serif style that was popular during this time.

3/13/2014
The Dada art movement rejected logic and reason, and instead embraced nonsense, irrationality, and disharmony. While the movement did not stand the test of time, Dada's legacy lives on in literature, visual arts, and graphic design. In this installment of Type Project, Nigel French shows you how to resurrect this "anti-art" style and build a Dada-esque typography treatment. As with the other courses in the series, he shows you how to choose fonts and color palettes appropriate to the time period and how to use Photoshop and Illustrator to recreate the style for a modern age. These techniques include simulating imperfect baselines, creating an overprint effect, and adding texture.

Want more inspiration? Check out Nigel's Pinterest board at http://www.pinterest.com/nigelfrench/dada-typography/.