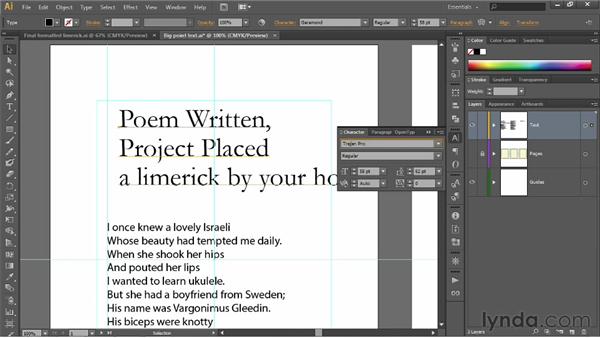 In this movie, I'll show you a handful of tricks for previewing and assigning fonts. And this has become a much better experience inside the most recent version of Illustrator, both for Mac and PC people for different reasons. Now we will be working with a couple of fonts that ship along with most versions of the Creative Suite, not all of them, but the fonts we'll be using are Adobe Caslon Pro and Trajan Pro. Now if you don't have access to those fonts on your system, then go ahead and try out some different fonts, see what kind of result you get.

I am going to click on my Point Text with Black Arrow tool to select it once again. And then notice up here in the Control panel, you can select a font from this Font list just by clicking on the down pointing arrowhead. And that will list all the fonts that are installed on your system. Your fonts and my fonts will definitely vary. Problem is when you work this way you can't see previews of the fonts, so you don't know what they look like, you just see this list. If you want to see the previews, go ahead and press the Escape key and click on that word Character there in the Control panel, to bring up the Character panel, and then click the down pointing arrowhead, and now you'll see previews.

And this is remarkable for those of us working on a PC, because we haven't had these previews at this convenient location before. You had to go to the Type menu, which was a pain in the neck, but now it's much better. You Macintosh people already have these previews. But still let's say you want to make them larger so that you have a better idea of what each one these fonts look like. Then go ahead and Escape out and press Ctrl+K, or Command+K on a Mac, in order to bring up the Preferences dialog box, and then click on Type, three items down over here in the left-hand list.

Notice this Font Preview check box is turned on by default, which is a great thing. If you want to make it larger, you switch the size from Medium to Large. That means you'll see fewer fonts on screen at a time, but you'll have a better sense of what they look like. Illustrator also keeps track of the most recently used fonts, which is great if you flip back and forth between a group of fonts on a regular basis. If you want to track more Recent Fonts than five, then you can switch it up to as many as 15. I am going to switch it to 10. All right, now I'll click OK in order to accept those changes.

And now notice if I click on the word Character, and then click the down pointing arrowhead next to the Font name, I see bigger font previews, and I could say, gosh, you know, Blackoak Std looks great. That will make my text even wider than it was before. Still all of it goes off to the second artboard. Let's say you want to type in a specific font name. Well, you can just click on that font name, like so, to select it, and then you type in some other font like, I'll type in the first few letters of the word Garamond, and then press the Enter key or the Return key on a Mac, in order to reformat my text.

But you can also highlight the font name using a special keyboard shortcut. And that shortcut is mash your fist F, that is Ctrl+Shift+Alt+F on a PC, or Command+Shift+Option+F on a Mac, and that's going to go ahead and bring up the free standing Character panel, which I have docked in this column of panel icons, and it also highlights the font name, as you can see, and then you could type in a different font. Like I know I want Trajan, so I'll just type in T-R-A-J and that got me Trajan, and then I could press the Tab key in order to apply the Trajan font and highlight the style option, which we'll come to in a moment.

And by the way, you also get font previews with this option right here, so if you click on the down pointing arrowhead, you will see previews of all the fonts as well. All right, I am going to press the Escape key to hide that menu. Here is another way to work: press Ctrl+Shift+Alt+F, or Command+Shift+Option+F on the Mac, to go ahead and highlight that font value. And you can press the up arrow key in order to go back through the various fonts installed on your system, or you can press the down arrow key to move forward. And when I say back and forward, I mean in alphabetical order.

And this is a major thing. You've been able to do this on a PC for a while, but this is the first version of the program in which you can do it on the Mac as well. And it may seem like why did it take Adobe 25 years in order to make this possible on the Mac. The truth is they couldn't do it before, the way the program was written, but they had to rewrite the program in order to take advantage of some OS and platform enhancements. The program as a result runs way faster than it used to in the past, and you can now arrow your way through the fonts. All right, but as I say, I want Trajan, so I will just type in T-R-A-J and then press the Tab key.

Now, notice one of the things that's missing from this Character panel--and you can make it bigger, by the way. If you want access to more options, you click on that little up down arrowhead icon to the left of word Character, and that shows you more options. Notice though, among these options there are no like bold, and italic icons the way you see in other software, and that's because every font is different. Some fonts have bold and italic styles and others don't. In the case of Trajan, for example, all we have is Regular and Bold, those are your only designer styles, so that's all you get.

Other fonts, if I were to go ahead and press Ctrl+Shift+Alt+F, or Command+Shift+Option+F on the Mac, to highlight that font name again, and I were to type in the Adobe Cas for Adobe Caslon, and then press the Tab key to Advance to the Styles and click on this list, and I'll see just a ton of styles that are available to me. So, Regular, Italic, Semibold, Semibold Italic, Bold, and Bold Italic as well, and you can arrow through those as well. So if you highlight that Style option and press the down arrow key, then you'll go ahead and Advance through the Styles. You can press the Up arrow key if you like as well.

All right, so I am going to press Shift+Tab to go back to my Font field, and I'll just type in T-R--actually that's enough to get Trajan Pro for me. And then I'll press Tab, and instead of Semibold, which doesn't actually exist, let's go ahead and press the Up arrow key to go back to regular, and then the Down arrow key to go to bold, which is the font style that I'm interested in applying. And then I'll press the Enter key on the PC, or the Return key on a Mac, in order to apply that style. To get rid of the Character panel, to get it off screen, obviously you can just click on that double arrow icon.

But you can also take advantage of the keyboard shortcut for the Character panel which is Ctrl+T as in type, or Command+T on the Mac. And those, friends, are your various options for previewing and applying fonts and font styles here inside Illustrator.