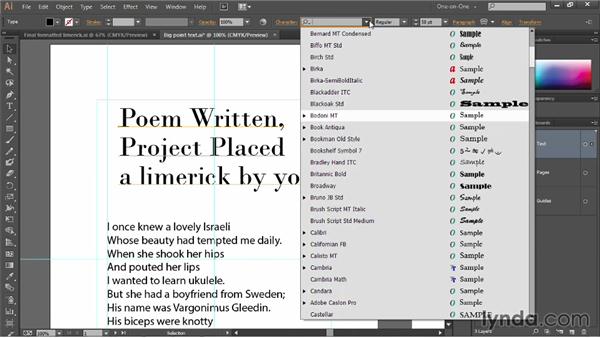 In this movie, I'll show you a few different ways to preview and apply fonts, as well as font styles inside of Illustrator. I'm going to start by selecting this Big point text with the Black Arrow tool. And when I do, you can see that I have a font menu up here in the Control panel. And by the way, if you're working on a very small screen on the Mac for example, you can go over to the flyout menu on the far right side of the Control panel. And you can decide to turn something off, such as Transform. And then the transform would go away, and as a result there's more room for other functions, as you can see here. So, all it means is there's not enough horizontal real estate open. Anyway, I'm going to bring back Transform because, I wouldn't want to miss it later. But notice that I just got rid of some alignment options. So, you have to pick and choose sometimes.

Notice, right next to the word Character, is this pop-up menu that's telling me that my text is set in Myriad Pro. If I click the down-pointing arrowhead, then I'm going to see a long list of fonts, and I can go ahead and scroll through them. And undoubtedly by the way, my fonts and your fonts are going to be totally different. Now, you can either just select a font or if you want to apply a style at the same time, you can twirl that font open and then select a style, such as Franklin Gothic Medium Regular. In my case and I'll end up with this effect here. Notice we do have these previews now at work inside all of the font menus throughout Illustrator, which is great.

If you want bigger previews, then escape out and press Ctrl+K or Cmd+K on the Mac, to bring up the Preferences dialogue box then click on Type, like so. And notice down here you can select from three different preview sizes, including Medium by default, Small if you want it smaller, not sure if you want that. And then Large, which is the one I'm going to go with. You also have the option of turning the preview off entirely, if you want to be able to see more fonts at a time. Notice here that illustrator stores up a list of recent fonts, by default it's set to 5.

So, right at the top of the menu are going to be the five most recently used fonts. You can increase that number size 15, I'm going to set it to 10. And that's it for now, so I'll go ahead and click OK. And now, if you click this down-pointing arrowhead, you will see bigger font previews (INAUDIBLE) sample here. And you'll see the font names spread farther apart. And so, I could just go ahead and scroll up the list and see what I got. And there's Blackoak standard which is definitely very expanded. So, I'll go ahead and try it out and our text gets, essentially worse than ever. Alright, a few more things you can do.

You can click inside the font name, and then you can arrow through the fonts. So, you can press the down arrow key, in order to advance through the list of fonts alphabetically. Or you can press the up arrow key, in order to go backward. So, that's a way to preview fonts on the fly on your page. The thing about this trick, it's been heralded many times as being this outstanding, wonderful feature. The problem is, if you've got a list of fonts like I do that just goes on and on and on.

And every day, it seems like you install more, and it just gets worse and worse, then you're going to be spending a good ten minutes arrowing through all your fonts. So, it helps to know a little bit about what you got. Alright, another thing you can do to access the font name, you can press Ctrl+Shift+Alt+F or Cmd+Shift+Option+F on the Mac. And what that's supposed to do, it's not working right now for me, but it's supposed to bring up the Character panel and highlight the font value like this. And because I couldn't get it to highlight with the keyboard shortcut, I'll just go ahead and click inside that font name. And now you can enter a different font.

For example I'm going to enter the first few letter of Myriad. And notice rather than just selecting Myriad Pro for me, Illustrator reveals a long list in my case, of different fonts styles that were designed specifically for Myriad Pro and I've installed on this machine. So, if your working along with me, you're probably not going to see more than a handful of styles. In my case I've got an installed all twenty something of them. And then, I can just select the one that I want to work with from the list, by clicking on it.

Now, not all fonts come with that many styles, which is why inside Illustrator, you don't see buttons for bold or italic. That would pretty much defeat the purpose, when you have a list of styles that's this long. And by the way, you can arrow through those as well if you click in the style option there and press the down arrow key, you'll style forward through the list. And the up arrow key will take you backward, so that's an option as well. But then there's a bunch of fonts that don't have barely any styles whatsoever. For example, I'm going to be working where this document is concerned, with a couple of fonts that ship along with the Creative Cloud, so you should have access to them.

And they're Adobe Caslon Pro and Trajan Pro. I'm going to start with Trajan for the headline, I'll just enter, tra, and that's good enough to give me Trajan and Trajan Bold. And that's what I'm looking for, not interested in Trajan Pro 3 or any of these other fonts. And notice by the way, that Illustrator no longer searches just by the beginning of the font name. It's going to look for other occurrences of in our case, tra such as Futura Standard Extra in my case. But as I say, I want Trajan Pro Bold, so I'll go ahead and select it. But if I now reveal the style menu, you could see all I've got to choose from is Regular and Bold.

So, if there had been an italic button, then Illustrator would have had to fake it just by slanting the text which between you and me, wouldn't have looked good at all. Now that I'm done with the Character panel, I can hide it by clicking on this little double arrow icon or, I can use the keyboard shortcut that both hides. And shows us the panel and that's Ctrl+T or Cmd+T on the Mac, the T being for type. And that friends, is how you preview and apply both fonts and font styles here inside Illustrator.