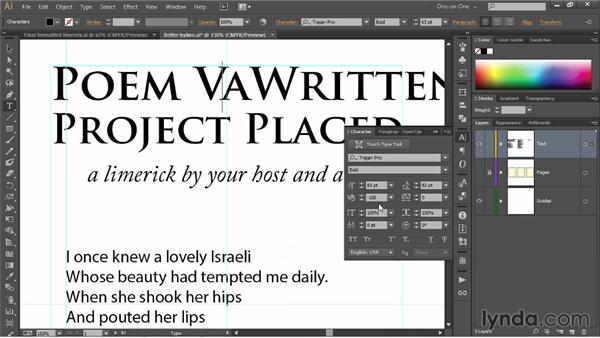 In this movie I will show you how to modify what are known as churning and tracking to adjust the amount of horizontal space between individual characters of time. And I warn you in advance this is pretty wanky stuff, I'll be introducing a hand full of new terms that you can remember or not. But it will make a big difference in the appearance of your text. So, I'm going to start things off by zooming in. And take a quick look at the first two lines of type. At first everything seems pretty good. But the more you inspect it, the more you can see inconsistencies in the spacing. For example, P and O: big spacing, O and E: big spacing, E and M: tighter, W and R: that looks like too much spacing to me, R and I are touching each other big space. T's are touching each other, another pretty big space, a bigger space between the E and the N, and so forth.

And so, the solution is to kern the characters. Now, the way character spacing is determined, it's built into the font and there's this certain amount of spacing that's assigned to the character itself. And then there's what's known as side bearing. Each character has a little bit of invisible space over on the left and right hand sides. And it could be positive space or it could be negative space. Now, to demonstrate what I'm talking about, I'll press the T key to switch to the Type tool. And I'll click in front of the W. And I'll just enter capital V, little o, like so. And now, if I click between these two characters the V and the o and then I bring up the Character panel by pressing Ctrl+T or Cmd+T on Mac. And I need to expand this panel, as well by clicking little up down arrow icon to the left of the word character and notice this turning value right there it says zero.

And that means that there is no special spacing assigned with this pair of characters, the V and o. Whereas, if I select the o and change it to a small a and click between these two characters, illustrator automatically changes the kerning to negative 55. And that's because VA are what's known as a kerning pair. And there's all kinds of kerning pairs built into each and every font definition, whole libraries of them essentially.

And this is the classic one, so classic, that you can see a little VA for the current icon right there. Well, what its saying when I click between these two characters, what its saying a negative 55 as that the two characters are being spaced together negative 55 1000s of an M. And the M is the width of an M space, which is basically the width of a capital letter M at this specific type size. So, in other words instead of being in absolute measurement they way points is, the point is always 1 72nd of an inch.

And M space grows and shrinks according to the size of your type, so if you end up perfectly kerning your text, and then you change its type size, it will remain perfectly kern. Alright now, at this point, let's say we want to adjust the amount of space between these two characters. We want them to appear tighter still. Well, instead of selecting the text, like so, you just click to set the blinking insertion marker in between the two characters and then you modify the value. Now, you can select the value from a pop menu if you want or you can dial in your own, so you can say.

Gosh, maybe negative 100. But you never know, is frankly the point, so instead, you want to take advantage of this really great keyboard shortcut. It's basically the same as the leading shortcut, but instead of using the up and down arrow keys, you use the left and right arrow keys. So, if you press Alt left arrow key you're going to move those characters toward each other in 5,000s of an M because that's what we specified a couple of movies back in the preferences dialog box. If you press Alt or Option right arrow, you will nudge the characters apart from each other.

If you are getting impatient and you want to move more quickly, which is kind of the whole idea behind setting a very low value in a Preferences dialogue box. Then you press Ctrl+ Alt left arrow, or Cmd+Option left arrow on a Mac, and that will give us a 5 X increment. Meaning, that we're tightening the kerning in increments of 25 thousandths of an M space. Ctrl+Alt right arrow, or Cmd+Option right arrow on a Mac, not surprisingly kerns the letters apart. Alright, well, we don't actually want to be want a so I will select those two characters and get rid of them.

Instead what we want to do,I am going to scroll things over here by Alt dragging like so. And then I'm going to triple click and drag on that last click in order to select the first two lines of type. And notice right now that my kerning is set to Auto. That means that Illustrator is looking at the font matrix, all the kerning data that's built into the font. If a pair of characters is not a kerning pair, then it will not be curve. For example, if I click between a W and R. The value is zero because of that automatic setting.

Anyway, I will triple-click and drag once again, and then I will show you there is a couple of other options. One is Matrix Roman only, which means Illustrator will only look at the matrix where the Roman text is concerned, any Asian characters will be ignored. Or you can choose Optical. And Optical is awesome. I have to say I've grown more and more impressed by it. What that does is it ignores the kerning data built into the font and Illustrator just goes ahead and reads the text. It actually looks at the character forms. And makes decisions automatically, and as a result, if I click between the W and the R, we now have a kerning value of negative 26 points that Illustrator has automatically applied on our behalf.

And, if I close the Character panel for a moment, you can see that the D is much more closely right aligned to the lower case italic r in author. Alright, this time I'm just going to triple click at the top line because the characters are spaced too far apart still. And I'm going to bring up the Character panel once again, and notice this option next door, which effects the tracking. And the tracking is essentially kerning that's applied across multiple characters. But it's heaped on top of the characters uniformly. And you can change the value. Once again, you can dial in your own value if you want to or you can kern the characters from the keyboard and the keyboard shortcut is the same by the way as it is for kerning.

So, if you press Ctrl+Alt left arrow, Cmd+Option left arrow on a Mac you're going to scoot the characters together. In this case I have gone as far as negative 50,000s of an M and if I press Ctrl+Alt right arrow or Cmd+Option right arrow on the Mac, I am going to increase the tracking. But I'm adding the Ctrl or the Cmd key to the mix there just so that we can quickly see big changes. What I really want to do is starting with a tracking value of 0, I will press Alt left arrow twice in a row. That would be Option+left arrow twice in a row on a Mac, in order to reduce that tracking value to negative ten and therefore scoot the character together just a little bit. And the idea is that I want the end to be right aligned to the D. And now I'll bring back the Character panel just so we can see what's going on. And you can see I've got this comma that's hanging just outside the margin. That's what's known as a hanging indent, and I think it looks great, but I don't want it to hang that far.

Thanks to our ability to fine tune kerning and tracking here inside Illustrator.