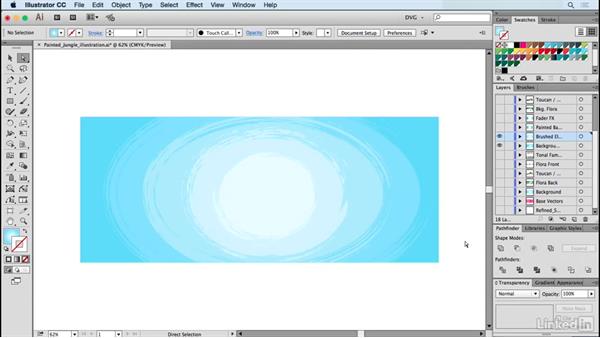 Von Glitschka shows us how the process, composition of layers, opacity, blend modes, color and creative challenges all worked together to form this vector-based painting in Illustrator.

- [Voiceover] The next illustration I wanna dive into is one which I call the Painted Jungle, and it's a toucan bird. Now, after I started working with vector brushes and creating simulated vector paintings with them that kinda resemble or at least hint towards a traditional look and feel, I really enjoyed it, and I wanted to find ways I could use it in real world projects. Now, some of the best advice I ever got from another professional illustrator by the name of Craig Frazier, a very talented guy, is he told me years ago that you get the work you show, meaning, if you wanna do a certain type of style or a certain type of work, don't wait for somebody to hire you to do it.

Just create it on your own, for no other reason than you wanna create it, put it on your site, and eventually, somebody's gonna see it that likes it. It's gonna resonate with them, and they're gonna hire you to do it. And that's kinda what happened here. I started sharing the initial illustration of that cat that I did, the second one was the apple that's shown up in this course, and I just shared that on my social media areas that I have for my company, and I got contacted by Adobe.

And they were asking me if I could create some artwork for a promotion they were doing, and it just happened to be that it was for using art brushes in Flash. And, they needed some illustration that would reflect that concept of using art brushes. And I said, "Well, I got the perfect style for ya." And so, they gave me free reign in terms of the theme, so I decided a toucan, because it's an animal I've always liked, I love the coloring of it, and I'd never illustrated a toucan.

So, this was my sketch, and it's in proportion to the proportion they needed, since it was gonna be used in a header on their website. This is all my base vector shapes that I'm gonna use to now compose my illustration, and it's gonna guide my vector painting efforts moving forward. Now, on this illustration specifically, I started with the background. And because I'm applying brushes, each of these shapes on this background I'm gonna apply a brush to the stroke on these shapes to create a modeling of a gradient in the background but make it look more distinctively painted in style.

All the flora, the kinda background elements in this, I figure out the base coloring of those, then comes the toucan with all the coloring that comes on his beak and all of this is just simply a base vector art. I have some strokes in here where I know I'm gonna apply a line-work brush to to get just little details like that to show up. And then, any kinda flora that will be in the foreground in front of everything, I have that on their own layer. All of these are being guided by tonal families that I create.

I have obviously a couple different green tonal families. One's more saturated, one's more subdued. I have some purple, almost eggplant-type color, reds, browns, blues, and gold. So, all of this is gonna work together. A toucan is just great in and of itself because it's so colorful on its beak. And, the patterns aren't always the same. Those are always changing come to find out, when I was researching images, so I could have a little fun with that as well.

All the brushes down below with the additional of a few other ones are gonna be used in this illustration. But, this is the core, base vector art. We're gonna take this now and really push it to look traditionally painted, and that all starts with the background. And once again, I created the very back background with just a simple radial gradient. And then, on top of it, the brush work. These are those shapes, and it's been masked inside of the rectangle perimeter for the proportion of the illustration.

You can see how I've applied the brushes to those radiating elliptical shapes to create that effect. All the brushwork that goes on top of that to create the nice painted background. And all of these, if I go to key line view, you can see, all they are just individual strokes with a brush that has been applied to them. So, it isn't complex at all in terms of the methodology. It just looks complex, because the brush itself has so much detail in it.

But, it's just layer upon layer to get this effect, to get this look. Now, another aspect to this illustration, I'm gonna turn on the toucan here, and you can see how it's really looking painted, and I've gone in and on some of the detailing, I'm gonna zoom in on his body here, you can see, I've applied line-work to the feathers on his chest, right here, right here, and down below on the lower part of his body. But, I've also used line-work to kind of reflect the edge of certain shapes.

I'm not trying to be realistic here. It's still a stylized format, but it's just done with painted brushes. Now, one shape in here, and this has to do with his wing shape, is a base vector shape, but I've applied a line-work brush to the perimeter, but I wanted to get that blend in it. And, this is where I ran into the problem of how do I put a blend on a shape that has a brush applied to it? So, I'm gonna turn these off really quick and turn this on, and this is exactly what that shape was, and you can see, it has a brush applied to the path, so it now makes it look irregular.

It makes it look more organic in nature. That's what I wanted, so that's easy to do. You just select it, and you could change that line-work to whatever you wanted, but in this case, I needed a blend. And, this is when I got stumped. I couldn't figure it out, I asked my friend Morty, and he's the one that told me about the Appearance panel, and if you group it, you can then apply a color. And, that's what I did, and that's what I show you in the other movie in this course how to do that. But, once I had that established, I could then work out all my detail on top of it.

Now, this doesn't look so great, because it's on a white background. So, we're gonna go back to where we were. And, we'll go ahead and turn on, let's see, we'll turn on all of our shapes, including our toucan. Now, we're back to where we were. And then, I have it organized in such a way so the foreground is on top of everything. And it's at this point that I have my brushed illustration pretty much all figured out, all composed, done the way I wanted to, but I wanted to add some texturing to it.

And so, this is where I bring in some nice, subtle flecking texture. In this case, this isn't vector based. This is a splatter raster image, a bitmap TIF that I'd just colored this kinda darker turquoise. And, if you go to Transparency, it's set to Multiply and 60%, and it's masked into the overall composition of the rectangle shape that this illustration is created in. So, that's one texture and then a texture above that is another splattering texture, and this one is white set to opacity, I think it's 30%.

And, once again, that is also masked into that background shape. So, when it's all said and done, you get a really nice authentic look with the splattering, with the texture, with all the brushwork, with the transparencies, with the blend modes, and all the line-work happening to form a really compelling image. And, Adobe loved this, and I believe it might still be on their website. If not, you can deconstruct this file and get even more insights on how I composed everything, what I adjusted, and what settings I applied to the various brushes and shapes.

4/19/2016
The precise, clean, and crisp shapes of digital designs work in many cases, but it is also possible to achieve a more organic aesthetic. Adobe Illustrator offers native digital brushes you can customize or expand to include your own imported, hand-painted brush strokes. Painting with vectors can produce a traditional appearance.

Graphic designer Von Glitschka appreciates the endless brush stroke freedom that real-world brushes offer, and he knows how to replicate this offering in the digital world. In this course, he shows how to create your own custom, handmade brush strokes and import them into Adobe Illustrator. Von demonstrates how to compile and use custom brush strokes to achieve both a hand-painted aesthetic and a personal touch. Whether you're a painter, a designer, or just a fan of Illustrator, this course offers instructions on how to expand your use of Illustrator.
Topics include: