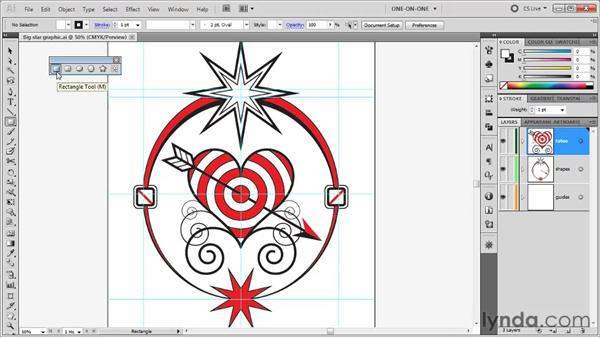 In this exercise, I'm going to do two things. First of all, I'm going to introduce you to our project file that we'll be building up over the course of this chapter. And then I'll introduce you to the geometric shape tools, which are essentially the closed path counterparts to the Line tools that we saw on the previous chapter. So where the Line tools draw open paths, they don't ultimately close. They begin at one location, end at another, so they have endpoints. Typically speaking, although there are exceptions, you stroke open paths but you don't fill them.

You can fill them if you like and sometimes there are reasons to do so, but more often than not you don't. And then the Shape tools draw closed paths. They don't have any endpoints, they form a continuous shape, and you typically, but not always of course, stroke and fill such paths inside of Illustrator. If you have access to the sample files, go ahead and open this guy, it's Big star graphic.ai, found inside the 05_ shapes folder, and this is the graphic that we're going to create. Notice, we're starting things off with that hardboard tattoo that we assembled in the previous chapter, and we're going to be adding a frame made up of a bunch of shapes here inside of Illustrator, as well as this arrowhead shooting through the heart in the background.

Now, to check out the Shape tools, go to the Rectangle tool or whatever tool is occupying this slot, click and hold on it, hover over the tear off bar, and then release, in order to create an independent panel of Shape tools, and now let's run through them. For starters, and mostly they are a very simple bunch, I have to say this, but there's all kinds of hidden techniques that are associated with them that make them extremely powerful. And they are not only the kind of tools you'll find yourself using on a regular basis, but they allow you to get work done very quickly. It starts off with the Rectangle tool, which allows you to draw rectangles and squares.

Then we have the Rounded Rectangle tool, which allows you to draw rectangles and squares with rounded corners, and you can adjust the roundness of those corners on the fly as you draw the shape. You've got an Ellipse tool that lets you draw regular ovals and circles. You've got a Polygon tool that allows you to draw regular polygons, that is shapes whose sides are all the same length and the same angle from each other. And this includes Pentagons and Hexagons and Octagons and all the other gons, as well as triangles. We'll be using the Polygon tool to create this arrowhead right there.

Now, you might say, if you know anything about Illustrator CS5, you may know that it offers arrowheads as a stroke attribute. However, in this case, we prefer to draw a manual arrowhead, because it's not like I'm drawing a bunch of lines inside of my illustration, so I didn't really need to automate the process, plus, it gave me more control over the final outcome, as we'll see. Next is the Star tool, which allows you to draw regular stars. And you can change the number of points and how spiky they are on the fly as you draw the shape. You can also, by the way, adjust the number of sides associated with a polygon as you draw it.

And finally, we have the Flare tool, which has nothing to do with the other tools. It draws a series of paths, both open and closed, and they are automatically assigned fill and stroke attributes, as well as differing layers of opacity, so you get this network of translucent objects. And we'll see how that works later. I'll give you a little demonstration. Whether you actually ever use that tool or not in your day-to-day workflow is anybody's guess. Well, my guess is no, but still I'll show it to you. And those are your six Shape tools inside of Illustrator.

In the next exercise, we're going to set this guy up, so he serves as a drawing template.