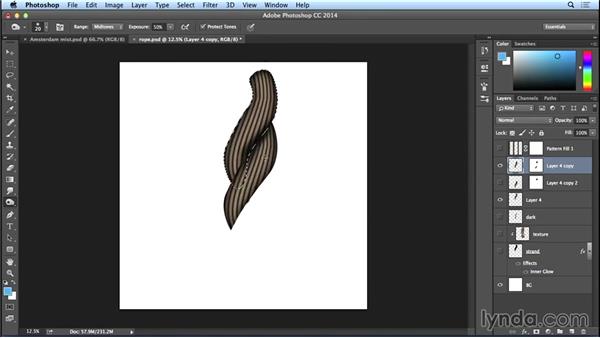 - In this, the final movie on the boats, we're going to talk about the little ropes, all these little ropes that you see that are attaching the boats right here, attaching the boats to the wall. Now, the way they do them, there are little warnings along the way, but most people just tie them to these fence posts up here. So, what we're going to do is create that little rope. Right here, we have the original rope file. It doesn't look like much right now and it only has one set of paths right there. It's a shape. One little knot.

Now, to see how that was applied, is that right here, it's a little lower, but I created this first little shape. There it is, it's just black, filled with black, because it's just a hold. Using a pattern very similar to the pattern that I created for the handle on the motor of the boat, I created this little shape inside. See, same little black lines that have been placed on top of a brown texture. We can see right there if I unlink them, you can see what the thing looked like.

See, it's just a straight thing that I just twisted and turned and manipulated using the warp controls and then clipped it so that it formed a shape inside of that overall shape of my rope. Then I added a couple little dark tones in there and then you can see that right here I created one more on top, I duplicated the guys below, and then added a little shading to it. That black is just behind the knots wherever it has a little gap. Right? Then I duplicated that down below, added a little shadow because there's going to be one that's going to be in between.

Again, the little gap in there has the black. Then a third one was applied in the middle. Now, there are masks to these too, because of the fact that they are complete just like this one was. But if we were to say turn these guys off here, leave the background on, we're only seeing that part and it's because of the mask. If we look at the mask, there it is. So, what I did is I simply went in and turned the other ones as selections, so we'll turn this one as a selection, make it a selection right there, and then in that mask, let's go look at that mask, in that mask I painted black.

See? Just to hide that part of this particular part of the rope that's hidden underneath there. So, that's how the little mask was created and then there's the overall link. Now, this was turned into a pattern in which I selected this area right in here, just in here, the area where they're going to kind of copy themselves over. I'm not going to worry myself over that, just this little area in there.

Once I had that pattern, I created a layer here where I shrunk it down and created my little rope. So, then for the actual boats what I did is I selected one of those from this layer here and I'm going to say copy it. Then in a whole new file, let's create a new file, and it knows what's in the clipboard, let's make it a nice square 4500, there we go, click okay and I'm going to say paste that.

There's my little rope. I'm going to take that layer and I'm going to say let's flip it 90 degrees. There it is and I gave it a little warp. Now here, in this particular case, I used one of the customs. So, I went there and I said give it the arch, there's a little arch. By grabbing this little handle I just brought it down so that the arch was this way and not as pronounced as it was before. Hit enter and there's my little rope at an angle which I could then further manipulate and twist it just as I want it in position like that.

I get a little closer so we can see it. There it is. All the nice little details are in there. As we get closer we see all the little knots are in place, and then that got applied to areas like right in here so you could see the rope right there, there, and there's another one back here, way in the back. They're the same rope that's just been applied to each boat and shrunken in size to fit into perspective going further back. In most cases you won't even see the detail. Like back here, you hardly see the detail at all.

But it gives me a very believable rope as you get closer in front. There's our little rope. We've lost that little detail, but that's okay because I now have a pattern of rope that if I ever need a closeup of a rope, I have it. It's always usable. It's a usable pattern that I can always have on hand whenever I happen to need a rope.