Making a new window into a document 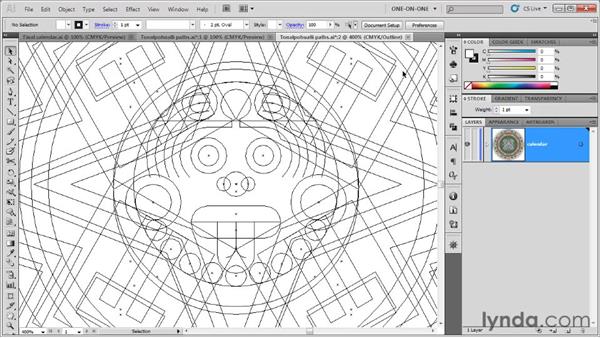 Over the course of this chapter, we're going to take the rough assemblage of paths that you see before you now and we're going to apply a variety of Fill and Stroke attributes. We'll also adjust the stacking order of the paths, that is how the paths are arranged on top of each other in order to convert this illustration into this final version of the document here and both of these files are found inside of the 07_fill_stroke folder. The beginning point for our project goes by the name Tonalpohualli paths.ai, named for the 260 day Aztec sacred calendar, in which 20 day signs are arranged in the 13 day periods, which has nothing whatsoever to do with my version of the calendar.

If you count the number of ellipses inside of rectangles, you'll find that they're 16 of those and then if you add the squares, you'll see that there is a total of 24 increments around the perimeter of my calendar. So it doesn't work out at all. It's a Tonalpohualli in name only, but of course it does draw its inspiration from the Aztec design and then the final version of the calendar is called Final calendar.ai. Now, I want you to notice that these two documents are aligned with each other, that is I've made sure that when I press Ctrl+Tab here on the PC or Cmd+Tilde on the Mac, that you see each one of the path outlines in exactly the same place.

I want to maintain that arrangement so that we can easily track our progress as we move through the exercises. So I'm not going to zoom or pan directly around inside of this window, rather I'm going to take this Tonalpohualli paths.ai file and I'm going to create a new window into it by going up to the Window menu and choosing New Window. Notice that creates what appears to be a second version of the file that's called Tonalpohualli paths.ai:2 as if somehow Illustrator has duplicated the document, but it hasn't.

This is merely a new window into the same document. I'll go ahead and press Ctrl+[Plus] a few times or Cmd+[Plus] a few times on the Mac to zoom into the central god's face right there and then I'll go up to the View menu and choose Outline or press Ctrl+Y, Cmd+Y on the Mac. Now I'm seeing a tight outline version of my document while at the same time, over here inside of the other window, I have a wide Preview version of that exact same file. So what good is that? Well, let me show you.

I'll go ahead and switch over to the second window onto the document and I'm going to drag this tab down like so, so that it creates a floating window. I'll go ahead and move it up so that I can scale the window to a better size, I'll make it a little smaller and I'll move it underneath here like so, drag the top of the window down, and then Spacebar+Drag in order to scroll my god's face into the center of that window. Next, what I'm going to do is I'll click on this circle around the god's face. So tie it around the god's face like so and you can see my Black Arrow tool tracing around this path.

So I'll start with Cyan active and I'll go ahead and change the Cyan value to 10 and as soon as I press the Tab key, notice that the other values become populated as well and they may all appear as 0, you may get a 100 here or there, you never know exactly what values are going to show up when you're switching from no Fill whatsoever to some Fill. Notice that I'm not seeing the results of my new Fill Color here inside the Outline mode. Of course, I'm just seeing the primitive paths, but I am seeing the results of the modification here inside of the preview window.

So both windows are doing their best to track my changes. Now I'll go ahead and change the Magenta value to 15. I'll change the Yellow value to 20 and I will change the Black value to 0 in order to achieve this sort of sandy color right there. Notice that the circle is selected inside of both windows into the document and both windows are monitoring my changes to the degree that they can. Of course, the Outline mode can't show me the results of my Fill and Stroke modifications. However, if I were to move this path to a different location like so, then I would see the path move here inside the Outline mode and I would see it move inside the Preview mode as well.

Alright, I'm going to press Ctrl+Z or Cmd+Z on a Mac, because I don't want to move that path outline. So tuck that away in the back of your mind. At any given moment in time you can create multiple windows into a single document inside Illustrator.

Video: Making a new window into a document