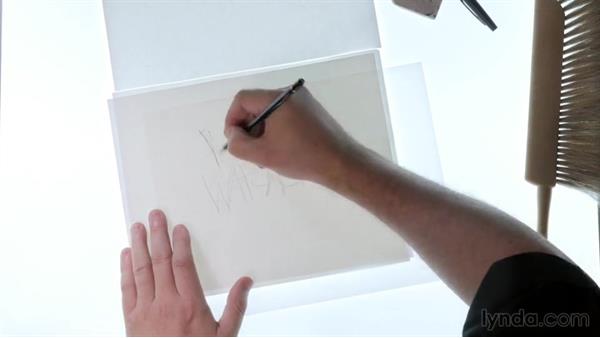 - Sometimes the hardest part of the creative process is knowing where to start, so before you begin sketching anything I suggest you do the following first. One, determine the exact phrase or words you wanna draw. Write them out so you can reference it while you draw. Two, have a general idea of the style you're gonna work in. You can always play with this as you sketch, but if this is a client-based project, you really should know what style is gonna be appropriate for your specific project.

Right now I'm going to draw a hand-lettered t-shirt design for my friend's band, Beware the Watchers. Let me show you the initial steps I take when I approach hand-lettering. So I'm gonna be drawing on top of my light pad, and it starts with just basic white paper stock and a 2B pencil. Now the first thing I wanna point out before I start drawing my letterforms is the way to hold the pencil. If I'm writing letters you would hold the pencil like this, but we're not writing letters, we're drawing letters, so we wanna get a nice elegant movement and flow, and interplay between the letterforms, and to facilitate that, and to help us draw that way so it has a nice, kind of nice aesthetic to letterforms, we want to hold the pencil a little differently.

So I like to hold it like this, and it's from the top down, so I'll be holding the pencil against the paper like this, but this is what it looks like. So that's how you want to hold the pencil. And as I first approach it, I know what, what the phrase is I'm gonna write out now, it's Beware the Watchers, so I'm just gonna start faintly drawing just single-stroke lines in order to work out a rough or crude composition, if you will.

And we'll just start doing that now, and I hold the pencil like this just to make the process of drawing these letterforms a little more fluid, a little more natural. Not that I'm gonna keep everything exactly as shown here, it's just to initially guide my drawing efforts as I move forward. So this is pretty rough, pretty crude, if I, at this stage, if I don't like something, I'll just take an eraser, for instance I don't like the A and the T so I'll go back in and I'll refine those a little bit, and once I get my general composition down in a rough form like this, this is where I'll start to use tracing paper.

And the form it is now is just single-stroke letters, and it's just to show how they interplay and kind of go with one another in a general composition. I call this "bone work," it means if you think of the letterforms as a body, this is like the skeletal structure of the body. We haven't added form or volume to the letter shapes yet, and that'll be the next stage of rough drawing when I work on letterforms.

So I'll put a piece of tracing paper over the top, and I usually tape it in place just so it doesn't move as I start drawing, and this is where I can switch how I hold the pencil now in its regular way, and I'll use my underlying, my underlying drawing that I did loosely to kinda guide further refinement. This isn't the final form yet, this is still pretty rough, but it's what's gonna kinda guide my overall shape in how they start to play and act, and I'll make a lot of decisions at this stage.

And one thing I should point out is when I work on a design like this, I could spend a good two or three hours at this stage and it's not even final yet, so I'll work through this, and I'll do usually two or three directions like this before I figure out that one direction that's gonna work well. So obviously we don't have that much time to do that so I'm gonna show you exactly how that process played out for this design. Here's my initial kind of "bone work," like I referred to it, and my overlay is right here.

So you can see how I'm starting to work out the volume of my lettering right here. Not only that, there's some opportunity here when you draw loosely like this, to erase and redraw and experiment with ligatures. So we have one going here from the W into the T of the word The, and we're also using the crossbar in the H to help form and begin the form of the letter for the E.

Now I'll experiment a lot at this stage. I'll put overlays on here, here's one example where, since the name of the band is Beware the Watchers, I kinda played off the word Watchers, and decided, you know, it might look cool if you have an eye in the negative space of the R. And we're gonna play with that a little more moving forward, but this is where it starts, this is how I start to construct my letterforms from a very rough stage, and slowly progress and develop them as I keep drawing using overlays.

Now with this specific design, they wanted a character to go with it, and they wanted it to be a logo type with a character, so I initially started drawing like a, kind of a freaky, not a Bigfoot character, but a cycloptic monster of sorts. That then gave me the idea, based off of the premise of the band's name to kind of play off of the all-seeing eye on the back of the money, and making that a character, so that's kinda the direction I'm gonna take this.

And so this is a really rough form. This is rough sketches, and in the next movie you're gonna see me refine this even more, and we'll move it to the final design. And I wanna show you one other design because it shows the same progression in terms of rough drawing. Here's my initial rough thumbnail sketch. I did this with a pen, just happened to be out and about and drew it on the fly, and then this demonstrates my bone work, where I've, for this specific style of lettering, it's hand-lettering, so it's, um, not hand-lettering, I'm sorry, it's script lettering, so I've drawn out a script form here.

Once again, a single-weight line just to guide my composition, then I start fleshing out exactly what the form of those letters are gonna be. So that's the process I usually take when I approach hand-lettering. On any type of lettering project I do, at least, I do at least three rough sketches like this one, and I try different variations on each. In the end some I'll like, and others will just be set aside and I'll never use them.

And I only show my client the ones I think are strongest, I think that's really important to do that. Doing this type of initial rough sketching helps to establish a solid creative foundation we can build upon moving forward, and it'll help guide us as we continue to refine our lettering in the next several movies.