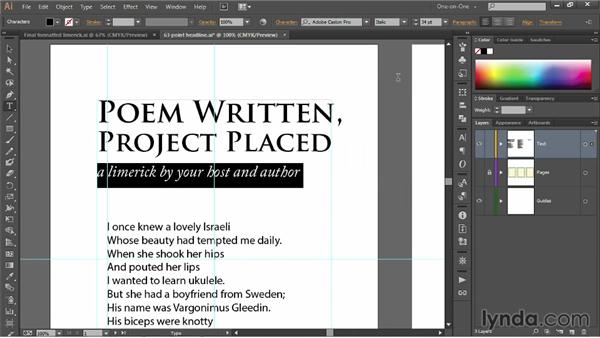 In this movie, we're going to format this by line underneath this headline here. And as we do so, I'll demonstrate how to work with leading and paragraph indents. I'm going to start things off by selecting this text with the Black Arrow tool. And then I'll double click inside the text to switch to the Type tool. And I'll triple click, one, two, three, in order to select the entire line of type. And next, I'm going to press Cmd+Shift+Option+F, or Ctrl+Shift+Alt+F on the PC, to highlight ostensibly this font value.

Hopefully that'll get fixed. If not, just click inside of there. And I'm going to type in the font that I want to work with. Which is Adobe Caslon Pro. So I'll start by typing the word Adobe, up comes Caslon Pro along with all of it's styles. Followed by some other Adobe fonts I have installed on this system. I'm going to go ahead and select Italic as the style that I want to work with. That automatically throws Italic into the font style option below. And now I'll just dial in a type size value of 34 points.

Next, I want to change the amount of space between the baseline of the selected text and the baseline of the text above it. And that's what's known as leading, by the way it's spelled like leading, but it's pronounced leading. And that comes from the strips of lead that they used to place between the lines of type back in the hot metal days. Nowadays, you can use this much more convenient leading option. And so, you could just click on this little icon here an A on top of an A and the arrow even shows what we're talking about.

We're increasing leading in 5x increments so that is 2.5 in our case. Or I can press Ctrl+Alt+Up Arrow to reduce this value in increments of 2.5. And ultimately got to tell you just to cut to the chase here. I'm looking for a leading value of 54. I'm at 55 now, so just press Alt+Up arrow a couple of times in order to get the result I'm looking for. And now I can hide the Character panel. Next what I want to do is right align the byline to the head line above so that the R lines up with the D.

And if this were a text frame filled with area type then I could change the alignment by selecting a different alignment option up here in the Control panel. For example, I could click Align Right. Problem is when you're working with point text you align to the point which puts the text on the wrong side of the point which doesn't do me any good at all. And incidentally, you should know that in addition to clicking on these icons that appear, here's Align Left and here's Align Center. You can assign a different alignment by pressing a very simple keyboard shortcut.

And this very first option allows you to apply a Left Indent, which actually indents the selected text to the right. And I'm just going to change this value to 52 Points and press the Enter key or the Return key on the Mac. Now you might argue that I haven't exactly aligned the right edge of the R here, the lower case R to the right edge of the D, and that's true. But eventually, this is all going to work out just go ahead and trust me. Now one more thing I want you to know about leading, because different programs do it differently. In Illustrator, you can apply leading on a letter by letter basis. So let's say I double click on the word 'your' to select it there. And I press Ctrl+T t or Cmd+T on the Mac to bring up the Character panel once again.

And I go ahead and change the leading value to 70 points and press the Enter key or the Return key on a Mac. That assigned 70 points of leading to the entire line of text. Even though, if I double clicked on the word, and, it's leading value's still set to 54 points. Which is to say, the highest leading value assigned to the line, wins. So if I return to your by double clicking on it and I reduce the leading value to a mere seven points like so. That restores the leading to 54 points because after all, that's the leading value that's assigned to the rest of this line of type. Alright, so generally what you want to do, just the safest way to work, is to go ahead and select that entire line and make sure the whole thing is set to 54 points. Because otherwise you might end up with some confusion later. And now I'll press the Esc key in order to apply my changes and I'll click off the text to deselect it.

And that's how you work with leading which is the vertical space between lines of type, as well as apply a first line indent in order to in our case scoot this line of type over to the right. In the next movie I'll demonstrate kerning and tracking.