Joining multiple paths at once 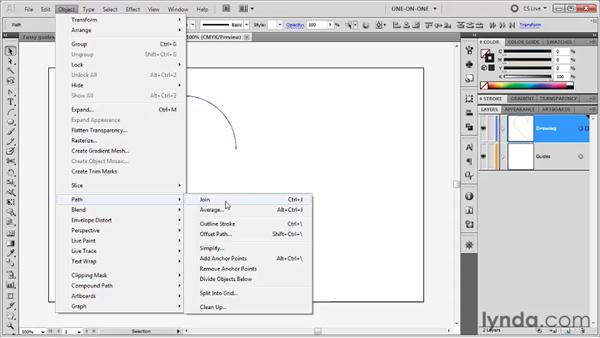 In this exercise we're going to take these three disparate paths that we drew with the Arc tool and modify it as well with the White Arrow tool and we're going to join them into a single half-a-heart. We're going to do it using a feature that has been greatly enhanced inside of Illustrator CS5. So I have gone ahead and saved my progress as My better half.ai found inside the 04_line_art folder. I am going to press Ctrl+; or Command+; on a Mac to hide the guidelines, because they're getting in my face right now and I want a clear look at my heart.

I'm going to go ahead and switch to the Selection tool, the Black Arrow tool and I am going to drag this arc away from the others, so that you can see that we have three independent paths at this point. What I really want is a continuous path, because otherwise it won't stroke correctly, we won't be able to fill it correctly, and so on. So I'll press Ctrl+Z, Command+Z on the Mac to undo that modification. Now, in the old days, that is Illustrator CS4 and earlier, you used to be able to join paths by going to the White Arrow tool and then you had to marquee around two anchor points like so and then you would either choose the joint command which will see in a moment or you'd go up here to the control panel and you would click on Connects selected end points, which you can still do.

However, it's a fair amount of work because you have to do it for each pair of points. What we can do now using the Black Arrow tool, you can just go ahead and marquee around the various parts that you want to select. Notice I just drew a partial marquee. I'm not trying to enclose every bit of each and every path. I'm just trying to get parts of each path. That selects all three paths as you can see. Now you can go on to the Object menu, choose Path and choose Join. This command used to require two selected end points, otherwise it would absolutely complain up a storm you would not believe.

Such a pain in the neck, this command has been for the last 23 years. Now, if you choose the command or press Ctrl+J, Command+J on the Mac, it just works. It didn't even bother to tell me he did anything, but he did do something. I'll go here to the Direct Selection tool, click off the shape, move my cursor over so I can see there's an anchor point below it. Notice I have a blue anchor point below and I'll also have the little hollow square next to cursor. I'll click and I've got a point selected obviously. I'll drag it around. It's fused together. Awesome! Ctrl+Z Command+Z to undo that movement.

Let's drag this guy around. That worked too. Incredible! Ctrl+Z Command+Z. So we have now just 1, 2, 3, 4 anchor points inside of one smooth continuous fluid path. All right, now I'm going to go ahead and grab my Black Arrow tool once again and I'm going to click anywhere on this path outline to select it. Notice at this point according to my Color panel, which you bring up by the way by going to the Window menu and choosing Color or pressing the F6 key. Notice that I'm seeing the Fill of my path is Transparent, and your should be as well.

If it's not, go and then click on this None icon right there. Your Stroke, which you can get to by clicking on the Stroke, is set to a K value of 100. cyan, magenta, and yellow are all zero, meaning that it's a weak black. I don't care about that right now. We will deal with Rich versus Weak Blacks later. But for now I know that I've got a Black Stroke and a Transparent Fill. I want to make that Stroke thicker and a Stroke is the outline of the path, in case that's not evident. I'm going to change this Stroke value right here by clicking this down pointing arrow head, bringing up the pop-up menu and choosing 10 point like so up in the control panel.

I get a nice thick Stroke as you see here. Now I want to do is flip this left half of the art in order to create a right half and then join those two halves together and we will do exactly that in the very next exercise.

Video: Joining multiple paths at once