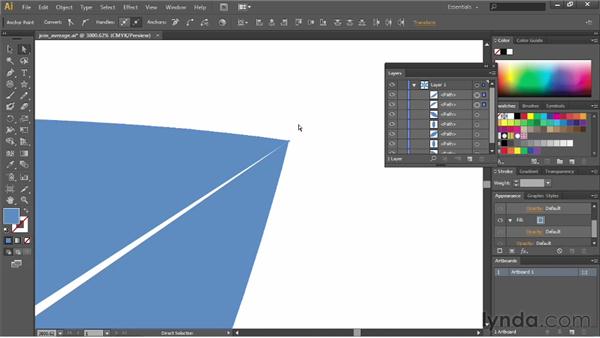 As you begin to work with artwork inside of Illustrator, especially artwork that was created by other people, you may run into some problems that you need to remedy with paths that were created. Now, when I first started working with Illustrator, I ran into this problem a lot and really didn't now how to fix it. Well, as a matter of fact, I actually created this problem a lot, and so in this movie I'm going to show you how to take to separate paths, and join them together. Or average them together to create one single path. Basically, what I'm talking about, if we focus in on this area here.

Let's just zoom in with the zoom tool a little bit. See how this area here, is way far apart. And that's because I have two separate paths here basically I drew one half of the leaf and then drew the other half of the leaf and didn't really take the time to connect them, and what happened was something got sort of messed up along the way and, there winds up being a big gap here. So what I want to do is I want to take this and turn these two shapes into a shape that look something similar to this. By the way, I'm panning around in here by using the spacebar key on my keyboard and then just clicking and dragging around.

And, so what I'm going to do is zoom in right here. You have two options when you're joining paths together. You have the Join command and the Average command. The problem is you have to figure out which one to use in a given situation. Let me give you a little rule of thumb. If the two paths that you're trying to join, are relatively close together, and in the same general area that you want them to be in. You can use join command. If however, the paths are something like this, where at the end, they're sort of far apart, and not really at the end where you want them to be. Let me zoom out here, so we can get there a little bit faster.

Like this. Then that means you're probably going to have to use the average command, but when all else fails use a little trial and error. Let's zoom back over here, and let's try this out. Okay, so first thing we're going to do is zoom in all these two points, and I'm going to grab the direct selection tool and I'm just going to move this guy over to see if I can get it close. Once I get those two close together, I can then drag a marquee selection with the Direct selection tool around the end points.

When I have those end points selected, I can go up to the object menu go down to path, and select join. When I do that, it joins together and you can see the seam is pretty much gone. But when I zoom out and pan over, look what happened to the end. The end sort of gets cut off. That's not what I want at all. So I'm going to undo that. And instead of using the join command over there on that other end, let's try the average command on this end. I'll make a marquee selection around these two points just like we had before and then we'll go up to the object menu again, choose path and select average.

Inside of the average dialogue box just go ahead and select both for your axes. This is usually the best guess for how to join two things together. Hit OK and those should snap together. You may see a slight seem in the middle which can be fixed just by using the path finder and merging these together. But if I zoom out you can see now that I have pretty much fixed the problem that I set out to fix. I have joined these two paths together. They are now one path. If I grab the selection tool. I can select them, and they can move as one pretty simply.

If I wanted to, I could also go to the end of these paths and now join these two points that I didn't join before. So let's do that. I'll switch to the Direct Selection tool by pressing the letter A, select these two points. Go to Object>Path>Join. And now when I do that the seam actually disappears. And if I grab my selection tool, you can see that now everything operates as one. I don't need even have to drag a selection around. It's just fixed the problem altogether. The next time you have some artwork that you need to connect two halves within the piece of artwork, try using the join and average commands, and see if it doesn't help you get where you're going just a little bit faster.