Introducing the three kinds of 3D in Illustrator 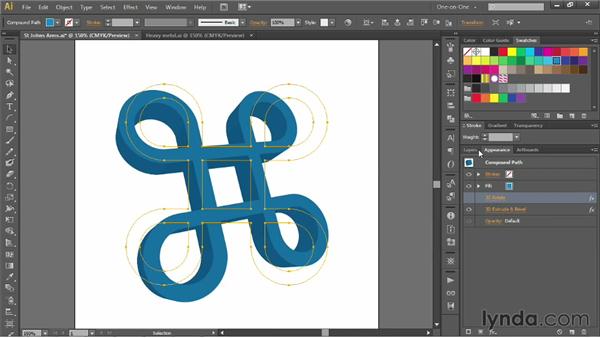 Join Deke McClelland for an in-depth discussion in this video Introducing the three kinds of 3D in Illustrator, part of Illustrator CS6 One-on-One: Mastery.

In this movie, I'll introduce you to the three varieties of 3D inside of Illustrator, which include 3D Rotate, 3D Extrude and Bevel, and 3D Revolve. I'll start things off by selecting this bow and knot pattern here, which is a single compound path, and then I'll go up to the Effect menu, choose 3D, and we'll start things off with the simplest of the effects, which is Rotate. What this command allows you to do is rotate a 2D object in 3D space. I'll go ahead and turn on the Preview check box, so you can see what I'm talking about here. And also drag the bottom of this box here upward, so that you can see that as you drag one of the edges of the cube, you'll see a wire frame preview there inside the Document window.

Now, I want you to notice a couple of things that are going on here. First of all, this is a dynamic effect, which is why the path outline remains in its original position and just the appearance of the artwork changes. Also notice that we have what's known as an isometric projection. That is, there's no perspective in the scene. So the parallel lines inside the original paths remain parallel inside the 3D projection. If you want to add perspective then you go over to this option, right there, click on the right pointing arrow head and crank up that perspective value, like so.

And you'l see that we now have some perspective in the scene. Obviously to apply the effect you just go ahead and click OK. And that wire frame will disappear in the background as well. Now I want you to note that this is not a true 3D effect. We are rotating the artwork in 3D space but it remains 2D artwork, as you can see here. And that's because it has no depth. If you want to achieve a similar effect, but you also want to add some depth, then you want to choose 3D Extrude and Bevel. So, I'll start things off here by switching over to the Appearance panel, and I'm going to turn off 3D Rotate. So that we can apply a new effect.

And then I'll go up to the Effect menu, choose 3D, and choose the first command, Extrude and Bevel. If Illustrator asks you if you really want to apply another instance of the 3D effect, go ahead and click on the Apply New Effect button. And then, let's go ahead and lift this edge upward again so we're achieving a similar effect. I'll crank up the perspective value as well, and now when you turn on the Preview check box, you can see that you've got those extruded sides projecting into the third dimension. Now I'll go ahead and click OK in order to accept that effect. Now, for 3D Revolve.

I'll go and switch back to my Layers panel, here, twirl open the only layer inside the illustration, and turn off that Compound Path in the background. Then turn on this group right here, and click on it to select it with the Black Arrow tool. So what I've done here is I've drawn half a circle, crossed it with a bunch of rectangles, and then the used the Divide operation inside the Path Finder panel to break things apart. So this is not a clipping group by the way, these are static shapes. You can apply a 3D command to a clipping group.

But if you do that it's pretty punishing. It requires a lot of computation, and it takes forever. So you're better off working with static path outlines. Now, what 3D Rotate does is it creates a 3D object by rotating whatever you select around an axis. So what we're going to do is take this half circle and turn it into a sphere. So, if you're working along with me select that shape, go up to the Effect menu, choose 3D, and then choose Revolve. And turn on the Preview checkbox in order to revolve the shape around so we get the striped sphere.

And then I'm going to drag this top edge of the cube downward, and you can see that we get this wire frame preview of this kind of globe that we're creating. Right about here is going to look pretty good. I'll go ahead and release, and we end up with this really good looking effect. Now I'll go ahead and click OK in order to accept that change. And obviously, because all these effects are dynamic, you can make any modifications you like, and Illustrator will update the effect on the fly. So let's say I press Ctrl+Y, or Cmd+Y on a Mac, to switch to the Outline mode.

And I'll go ahead and press the A key to switch to the White Arrow tool. And I'll Alt-click or Option-click on this top sliver, which is one of the black shapes. And then, I'll go over here to the far right side of the control panel, and make sure that All is selected from the Select Similar Objects list, and then I'll click on its icon, in order to select all those black lines. Now let's press Ctrl+Y or Cmd+Y on a Mac. Switch back to the Preview mode and I'll change the fill from black over here on the left side of the control panel, to this dark red right there.

4/30/2013
The fourth in a series by industry-pro Deke McClelland on the premiere graphics creation application, Adobe Illustrator, this course shows you how to become a more efficient, exact, and creative designer with the advanced tools in Illustrator. Maximize your productivity with tools such as Smart Guides to precisely align your artwork, symbols that help you reuse it, and pattern brushes that allow you to tile it across the screen. Plus, learn how to add special creative touches to designs with the Gradient Mesh feature, great for creating photorealistic airbrushing effects; the Liquify and Envelope tools; the layered transparency you can achieve with opacity masks; and 3D effects like live, editable 3D type.
Topics include:

Q: In the "Assigning colors to mesh points" lesson, I cannot pick up the color of the visible tracing/photograph layer with the Eyedropper tool. What am I missing?

A: Make sure the template file is embedded in your file, not just linked, and try to sample the color again.

Video: Introducing the three kinds of 3D in Illustrator