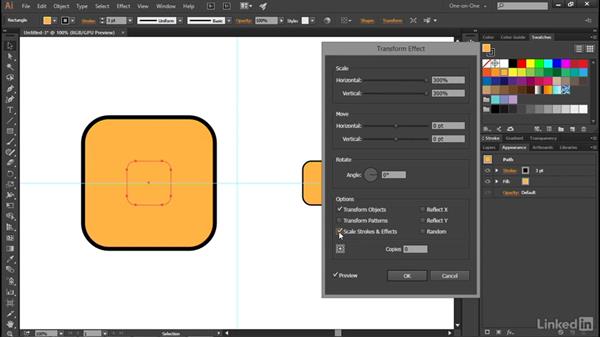 - [Voiceover] Alright, let's start things out by taking a look at the Scale Tool and seeing how it compares to a Dynamic Transformation. I'm gonna create a new document by going up to the File menu and choosing New From Template, or I could press Control + Shift + N, or Command + Shift + N on the Mac, and then I'll just go ahead and double click on my center guides document like so. And I'm gonna go ahead and change a couple of settings up here. I'll switch the Fill to something like, orange let's say, and then I'll take the Lineweight up to three points. And next I'll grab my Rectangle Tool, which of course I can get by pressing the M key, and I'll just go ahead and Alt + Click or Option + Click at the intersection of those two guides to bring up the Rectangle dialogue box and I'm gonna dial in 100 for both the values and click OK.

Next I'll go ahead and double click on one of these round corner widgets in order to bring up the Transform panel, and I'll dial in around this value of 20 points, and because I have my Link icon turned on, that goes ahead and rounds off all the corners. Alright, now I'll go ahead and hide that Transform panel, and I'll press the V key to switch back to my Black Arrow Tool. Alright, now I wanna move this guy over so I'll press the Enter key or the Return key on a Mac in order to bring up the Move dialogue box, and I'll change the horizontal value to let's say 200 points and I'll leave the vertical value set to zero points, and then I'll go ahead and click on the Copy button or of course you can press Alt + Enter here on the PC, or Option + Return on the Mac in order to create a duplicate of that guy.

And then I'll click on the original, press the Enter key again or the Return key on a Mac, to bring up the Move dialogue box and I'll change the horizontal value to negative 200 this time and click OK. Alright so again, the purpose here is to demonstrate the difference between working with a Transform effect that we saw on a previous chapter, and the old school Scale Tool. And so one way to apply transform is to go up to the Window menu and chose the Appearance command and that'll bring up the Appearance panel. And then I could drop down to the Effects icon in the bottom left corner of the panel, choose Distort & Transform, and then choose Transform.

Another way to work however, is to just go up to the Effect menu, choose Distort & Transform. Notice we're seeing the exact same commands, and then choose the Transform command. So either the Effect menu or this Effects icon, either way is gonna work. And now I'll change the scale values to 300% each like so. And then I'll turn on the Preview checkbox, just so we can see what's going on. And something that I want you to notice here is that the Transform effect goes ahead and increases the roundness of the corners.

So it goes ahead and scales that round corners we're seeing right here. You also have the option if you like of scaling the strokes and effects by turning on this checkbox which I'm gonna go ahead and do, and then I'll click OK in order to scale that shape. Alright, now let's see how a Dynamic Transformation compares to a static one. I'll go ahead and click on this shape right there and then I'll select the Scale Tool, which by the way you can get by pressing the S key, and just as when you select one of the Arrow Tools and press the Enter key or the Return key on a Mac, you bring up the Move dialogue box.

I'll go ahead and cancel out there. If I switch to the Scale Tool, and press the Enter key or the Return key on a Mac, I bring up the Scale dialogue box. Now at which point, I'm gonna change my uniform value to 300%, that's handy by the way. I don't have to enter 300% in two different fields, I can just enter it once. And then, notice in addition to the Scale Strokes & Effects checkbox, which I can turn off or on, and of course I can see the effect if I have the Preview checkbox turned on, I also have an independent Scale Corners checkbox, which I can leave off if I don't want to scale the corners, or I can turn on if I do want to scale those corners.

So you have a little more convenience, as well as a little more flexibility when you're using the Scale Tool. Now of course the big difference is that one's a Dynamic effect and one is not. So if I were to go up to the View menu and choose the outline command, or press Control + Y or Command + Y on the Mac, then I would see that the shape on the left is still small because it's been modified dynamically, and the shape on the right is as large as it appears on the Preview mode. Alright, I'm gonna press Control + Y, or Command + Y on a Mac in order to switch back to the Preview mode.

One more thing I want you to see, if I go ahead and press the V key to switch back to my black arrow Tool, and I click on the shape to select it. Notice here in the Appearance panel, we're seeing the word "transform," and if I click on it then I will bring up my transformation settings at which point of course I could change my mind if I like by turning on the Preview checkbox and then changing these values to let's say, 200% like so. At which point I'll go ahead and click OK in order to apply that effect. Compare that with a static transformation, I'll go ahead and click on that static shape and you can see that we have no information about the transformation here inside the Appearance panel and in fact, Illustrator has not the vaguest idea how large this shape was when we started.

And so that's ultimately the difference between a Dynamic Transform effect, and a Static Transformation. The former allows you to change your mind any time you like. The latter is more or less permanent, however it gives you more control. And we're gonna see further evidence of what that control looks like in the very next movie.