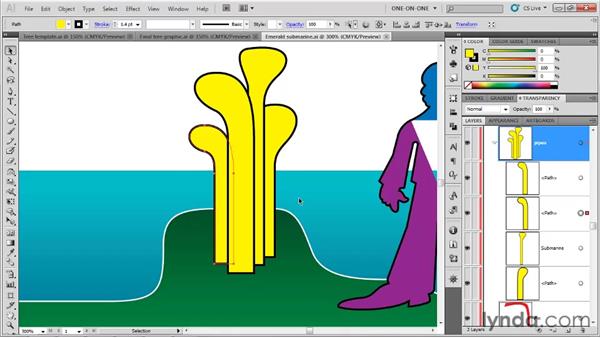 Now the Pathfinder operations are one of those features that when you are first using them, you think these are pretty great, and over time you kind of realize that they rank among the best features in all of Illustrator. They are absolutely invaluable, because they allow you to take primitive or even complex objects and combine them together to create even more complex pieces of art. To it, over the course of this chapter, we are going to take this hideous photograph right here, which I shot from my hotel balcony, actually, just to give you sense of the wonderful view that I have.

We are going to take this tree in this parking lot right here, and we are going to ultimately convert it into this graphic right there. So we are actually going to draw a tree from scratch over the course of this chapter. We are going to be starting, by the way, with this file that's called Tree template.ai that has nothing, but the tree photograph inside of it. So we are going to be working from scratch. Now that might seem a little intimidating at first when you take a look at the final version of the artwork, and our final version may look a little different than this, because there is an awful lot going on, but I want you to know that, while fairly time consuming, it does take a little bit of work, it's not technically difficult.

We are actually going to be drawing all the base branches using of all things the Line Segment tool, doesn't look like it, but that's what we are going to start with. And then we are going to build up the foliage using the good old Blob Brush tool, and then we are going to tweak the results using a combination of the Blob Brush along with the Eraser tool. Of course, we will be applying Pathfinder operations. Then finally, we have got this moon right here, which is a combination of a handful of circles and then one and only one path that's drawn with the Pen tool, so we will only be drawing a single path with the Pen tool and that's this implied silhouette of a face right there.

Now if you are familiar with previous versions of my Illustrator One-on-One video series, whether it was CS4, CS3, whatever, then you know by now that all of the projects have been different. Well, we are going to start with something that's a little bit familiar. I need to give you all a sense of how the Pathfinder operations work, and we are going to start things off with this familiar graphic right there, for those of you who have seen the series before, Emerald submarine.ai and we are going to be building up the yellow submarine and you may be familiar with the Yellow Submarine cartoon movie from 1968, a vehicle for The Beatles, even though The Beatles weren't actually in it, rather than John, Paul, George and Ringo had featured the voices of a different John, Jeff, Peter and a different Paul, but be that as it may, what we are going to do is, we are going to join these pipes to the core submarine here, using the preeminent Pathfinder operation, which is Unite.

And then we will also be building up this silhouette of Ringo over here on the side. Alright, so what I would like you to do, I am going to go ahead and zoom in here on these pipes, and notice that I have four yellow pipe paths, and if you twirl open this top layer in the Layers panel, which is called Up Above, you will see that there is this group right there called Pipes and it contains a bunch of Path Outlines. All of which were basically created from a single path. So I drew this first Path, this guy right there actually, and then I scaled it and further modified it using the White Arrow tool to get the other paths.

Alright, so let's say that I want to join these paths with the submarine below, why then, I would go ahead and meatball the pipes group. So you can apply pathfinder operations to groups if you like, and then I would go ahead and Shift+Meatball Submarine. I could obviously select these shapes anyway I want, I could use the Black Arrow tool as well if I preferred. And then I would bring up the Pathfinder panel. A few different ways to get to that panel, you can go to the Window menu and you can choose Pathfinder, you have got a keyboard shortcut in case you are interested, Ctrl+Shift+F9, Cmd+Shift +F9 on a Mac, or if you set your panels up the way I suggested toward the beginning of the series, then you've got this column of icons right here, and this icon, the one that looks like two squares overlapping each, other that brings up the Pathfinder panel.

Now we are going to be relying on a Pathfinder panel an awful lot over the course of this chapter. So as opposed to springing it out into the Illustration window where it stands a chance of covering up some important stuff inside of the document, I am going to go ahead and drag these panels over into the big panel stack by dragging from the empty dark gray area to the right of the word Pathfinder. Then I will go ahead and drop this panel group right above the Layers panel like so. Alright, that makes it nice and accessible. Now, you will notice here that we have got four icons that fall inside of this Shape Modes area and then six more icons that fall inside this Pathfinder's area.

The Shape Modes are by far the most useful; with very few exceptions the Pathfinders down here are not options that you are going use on a regular basis. So I will allude to a couple of them here and there, but for the most part, we are going to focus our attention on these guys, because, this group right here from Trim over to Outline, those four operations in particular are exercises in frustration in my opinion. However, these guys right here,the Shape Modes, and then to a lesser extent Divide, and then finally the last guy, Minus Back, are very, very useful indeed.

So we are going to start with this one, Unite, and if I click on Unite, I am going to fuse together all of the selected shapes into a single shape. So I will go ahead and do it right now, click. And notice that fuses everything together into a single path. Notice there is now a single selected path here inside the Layers panel. It goes ahead and adopts the Fill and Stroke attributes of the front most path in the selection, which happen to be one of these pipe paths. So as a result, the new path now has a yellow fill and a black stroke. So that's one way to work, if you want to just go ahead and fuse a bunch of shapes together, you have got the Unite Filter again, just to give you a sense of what we did, this is Before.

If I press Ctrl+Z, Cmd+Z on the Mac and if I press Ctrl+Shift+C or Cmd+Shift+C on a Mac, this is After. Another way to work by the way, I will go ahead and do that again. Another keyboard shortcut that you should bear in mind and this is a little esoteric, but it can be very useful, to repeat the last pathfinder operation, you press Ctrl+4 or Cmd+4 on a Mac. So I don't have a mnemonic for you. The reason Adobe chose it is because 2 and 3 were already occupied by the Lock and Hide commands here, and then 5 is used as you may recall, by the Make Guides command right there.

So 4 was sitting there open, and as a result, Ctrl+4, Cmd+4 on a Mac, goes ahead and repeats the last Pathfinder Operation. That's one way to use the Unite operation. In the next exercise I'll show you a different way to unite shapes; we will join them together in order to build Ringo.