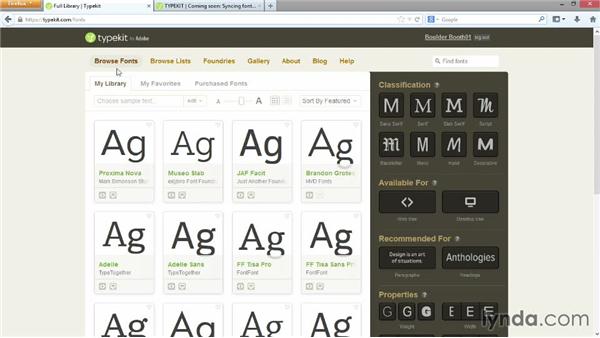 In this movie, I'll introduce those of you who subscribe to the Creative Cloud, to a service that's available to you, called Type Kit, which allows you to install fonts on-the-fly. Now if you have access to this exercise file, and you open it in Illustrator, you may end up getting a font warning, and that's because I used three fonts that may not be available on your system, which include Giddyup For the word woody, Stencil for the word don patrol, and Hobo for the words California Groundswell.

But as I say, if you're a Creative Cloud subscriber, you have access to them online. And so, here's what you do. First, you want to launch your Creative Cloud application, which will probably take you to the list of apps that are available to you. You'll want to switch to fonts instead. Now your screen will look a little different than mine. But you should see a button that says something to the effect of, Browse fonts on Typekit. In which case, go ahead and click on that button, and that'll launch your default web browser.

Now if this is the first time you've launched Typekit, then you're going to need to sign in, after which point, you'll be taken to this web site. Now any time we show you a web site, it's very likely to change, but, you should, somewhere find a search field, in which case you want to enter Giddyup stencil hobo. So you can enter all three into the search field at once, and then press the Enter key, or the Return key on the Mac, in order to see examples of these fonts. So there's Giddyup Standard, there's Hobo Standard, this is a font I'm not really looking for, you may see other stencil fonts as well, and there's Stencil Standard.

And you can see that each one is available for installation on your computer, because I'm seeing this little computer icon that reads, Desktop availability. And like I say, the interface could change, but you should be able to get to each one of these fonts; then you just click on the icon in order to install it. At which point, within a minute or two, those fonts will be installed. And worst case scenario, you'll have to close this file and reopen it inside of Illustrator, at which point you should no longer see the font warning.

And that's how you install a wide variety of fonts using Typekit, which is available to those of you who subscribe to the Creative Cloud.

12/12/2013
Get to know Illustrator—the industry-leading drawing program—and immediately start making smooth vector-based drawings and type treatments, with no experience required. Acclaimed Illustrator instructor Deke McClelland efficiently introduces you to those Illustrator features you'll need to create your first vector-based drawing projects, focusing only on the core features and skills that you need to get started.
Topics include: