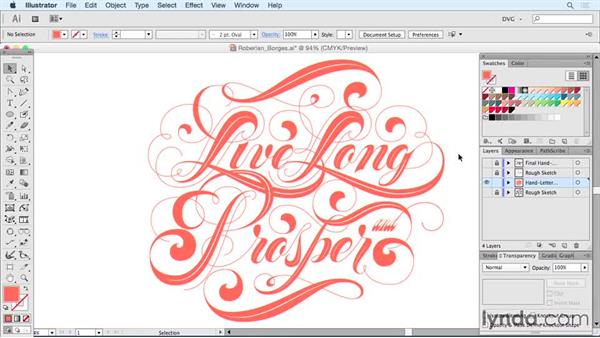 - The next artist I'd like to share with you…is Roberlan Borges, and he's a really talented…hand-letterer based out of Brazil.…When he approaches his hand-lettering projects,…he first works them out in a rough, hand-drawn form.…So this was one of his initial rough sketches…for a design that he decided to create…to share with this audience,…and it's playing off of a Star Trek saying,…which is "Live long and prosper,"…so I like it just from that perspective.…

So, thanks for doing that,…I thought that was pretty cool.…But you can see how, in his rough sketch…he's kind of working through…how he's gonna handle the ligatures,…and how those ornamental frills…will work from the letterforms themselves,…and this helps to guide his final art,…which he creates obviously in vector format,…and you can see he's built…most of these looping shapes as strokes,…and then he expands them…and turns them into vector shapes.…

Wonderful, elegant flow of line work…and thick and thins,…to create a really fun design.…Now when he sent me this file,…