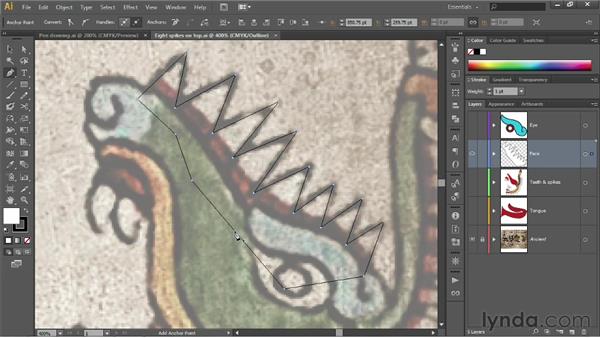 In this movie we'll go ahead and close out our path outline and also show you how to insert and remove points from the interior of a path using the Pen tool. I've saved my new path outline as Eight spikes on top.ai, and notice my path is still active. I'm just going to go ahead and click down here let's say, and then click in a few other random locations to add some more anchor points. And finally, I'll arrive at the first point in my path outline, and notice when I do that I get a little circle next to my pen tool cursor, which tells me that I'm going to close that path.

So, as soon as I click on that first point, the path is closed, I get an asterisk next to my pen tool once again, telling me that if I click again, like so, then I'm going to end up drawing a new path outline. And I'll just go ahead and close that one as well, then I'll press the backspace key a couple of times, by the way, in order to get rid of this path. So, the first time I press the Backspace key, I get rid of just the selected anchor point, and I also end up with an open path outline. I want you to notice this because we'll be contrasting that to the way we remove points using the Pen tool.

With this anchor point selected, if I press Backspace or Delete, then I end up not only deleting that anchor point, but also its two neighboring segments. So where I used to have five segments a moment ago, I now have just three segments left. Notice Illustrator goes ahead and selects all the anchor point this time, so if I press Backspace or Delete a second time, I'll go ahead and get rid of the entire path. Let's say I want to modify this path outline right here. Notice I'm sort of hovering my cursor over various anchor points and over the segments, and I'm not seeing anything change, I still have an asterisk next to my pen.

But if I press the Ctrl key or the Command key on the Mac, in order to get my White Arrow tool, and I click somewhere on the path outline to at least partially select it, then notice if I hover over a segment, I see little plus sign next to my cursor and if I hover over an existing anchor point, I see a little minus sign. Now the great thing about this feature is that if I click on an anchor point with a Pen tool cursor, then I go ahead and remove that anchor point, but I do not create a hole in the path, so I do not get rid of the neighboring segments, and the neighboring anchor points are connected by new segment.

If I go ahead and click on an existing segment-- not an anchor point, but rather a segment-- I'll see a plus sign, and that tells me that I'm going to add an anchor point as I just did, then I can Ctrl-drag it to a new location--that would be a Command-drag on the Mac. Now let's go ahead and integrate this free- form polygon into the illustration. I'm going to press the V key to switch back to Black Arrow tool, and I'll click on this path outline in order to select it, and then I'll go up to the View menu and choose a Preview command in order to switch back to the Preview mode.

This layer is called face, because we're actually going to put the face and lips on this layer. The spikes go on this layer right here called teeth and spikes, so I'll go ahead and turn that layer on, so I can see it, and now I'll press Ctrl+X, or Command+X on the Mac, in order to cut the spikes to the clipboard, and I'm going to send the spikes behind this shape right here, so I'll go ahead and click on it in order to select it--and by the way, this path, if I were to press Ctrl+Y, or Command+ Y in the Mac to switch back to the Outline mode, represents this kind of blood layer or something that's along these spikes.

So, what we want to do is put that redness into the bottom of the spikes and here is how we'll do that, I'll press Ctrl+Y, or Command+Y on the Mac, to switch back to the Preview mode. I'll go up to the Edit menu and choose the Paste in Back command, or I will press Ctrl+B, or Command+B on the Mac, in order to paste those spikes in back of that shape. Now I'll go and grab that shape, and we need to cut it, so I'll click on it to select it, and then I'll press Ctrl+X, or Command+X on the Mac, and now I'll click on the spikes once again, let's switch the Drawing mode to draw inside like so, and then I can go up to the Edit menu and choose Paste in Place or press Ctrl+Shift+V, or Command+Shift+V on the Mac, and that goes ahead and paste that redness into the spikes, and now I'll just switch back to the Draw a Normal mode, in order to avoid placing any more objects into this path.

Now the last thing I need to do is give the spikes a thicker stroke, so I'll go ahead and click on the spikes to select them, and I want to change the stroke to 2 points. Now right now Illustrator is behaving as if I have mixed attributes, which I guess technically I do, because one of the shapes is filled with red and it has no stroke, and the other is filled with white and it has a black stroke, but in fact, if I go ahead and click this down pointing arrow ahead next to stroke up here in the Control panel and I change the Line Weight to 2 points, that only affects the spikes, and it doesn't affect the redness inside.

So, that's how you drawn and edit free-form polygons using the Pen tool inside of Illustrator. In the next movie I'll show you how to draw a primitive spline curve.